THEY WERE FIRST RESPONDERS 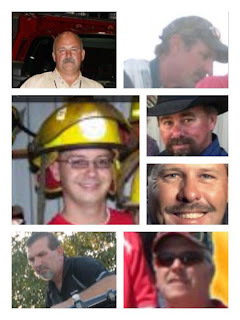 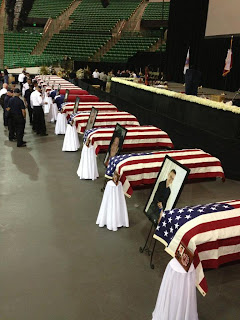 My son and I stood with the Patriot Guard this morning in Waco. The loons from WBC didn't show up.

Lin Barker thank you from the bottom of my heart..and Goddess bless you.

A tremendous loss for their family, friends, West and Texas. Rest in peace, first responders.

A tragedy! Such a loss...my heart goes out to all in West, By Goddess, Texas. xoxox

To be so brave...may they all rest in peace and may their friends and families gain comfort from knowing how much of a difference their lives made.

It was their finest hour.

*salutes the brave ones*

My husband was with our volunteer fire department - as were my daughter and son (in the teen unit). I have to say I was glad he was a Paramedic and not one of the first responders who would run in as the other people were running out. I do know that even though West's first responders leave all those who will mourn each and every day, I know they were fully aware of the danger and accepted it as the heroes they were. The old saying that they died doing what they loved is absolutely right. If they could come back, they wouldn't change a thing. Such wonderful people.

Yes, a bad week. And the sorrow is a reel unwinding into the future ... as you say.

Thank you for saying it so well.

Very sad, and very beautiful. Thank you for your post.

Everyone alive on this planet today can thank some first responder back in the mists of time. We have always relied on the bravery of a few to guard the safety of the many. And I know your town will keep those families in your bosom forever. The children might not have a Dad, but they will have a village that damn well knows how to raise a kid.

And yet, Rick Perry is pissed off at a cartoon.

well I'm pissed off at a bunch of cartoons..we don't need people using West's tragedy for political points..that goes for Democrats as well as Republicans..piss off all of them.