Oh, I fecking love my DAM News...last Sunday ole James Baker said he thought there might be som

ething to this global warming stuff, but would NOT give up his Big Tahoe SUV...this week, he said he needed to clarify the statement, that he might buy "a Tahoe that is a little smaller -if that would help."...From my lips to your ears James?...fuck you and your Tahoe.
More of the tapes from Richard Nixon's White House have been released...Man, I wish he was still alive so we could call him out on some of the shit that comes out of his mo

uth..."There are times when an abortion is necessary. I know that. When you have a black and a white, or a rape."....I personally plan on bipping into a coma the next person that either defends him or what he says..Jeez.
Just about when you thought Iran had the top spot on crazy, here comes the North Koreans. "If the U.S. imperialists start another war, ignorant of the ignominious defeat they have sustained in the past Koran war, the army and people of Korea will determinedly answer 'sanctions' with retaliation and 'confrontation' with all-out confrontation...and wipe out the aggressors on the globe once and for all." .....our response to

that? Pentagon spokesman Geoff Morrell said:"I don't Even know how to respond to that. It's silliness. For what and with what?"...Well, I have the answer to the with what....see the picture?

Just about the time I think people in the large cities of Texas have a few brain cells working, something like this comes along and reminds me that beneath it all...they're still rednecks. Even the cops.
Last week at the Rainbow Lounge, a gay bar in Fort Worth was subjected to a 'club inspection' by 2 Texas Alcoholic Beverage Commission agents and 6 FWPD. These checks happen often and they're looking for people obviously drunk and will cite them and the bar. In a official statement, police said they encountered hostile drunks, some of whom "made sexual explicit movements." toward the officers.(heehee) One customer allegedly "assaulted a TABC agent by grabbing him in the groin." Patron's of the bar say the officers showed up prepared to make arrests, with fists full of plastic zip-cuffs

. "They were hyped up. They were loaded for bear," said Todd Camp, a veteran journalist who was there celebrating his birthday with friends. "They were just randomly grabbing people and telling them they were drunk."

Camp said he has been in bars during TABC/police "checks" before, " and it was never anything like this." Usually, he said, officers discreetly walk through, looking for anybody who has too much. this was different. "They were shoving patrons," Camp said, "asking, 'How much have you had to drink?'
The differences in statements on how Chad Gibson was injured were very different also.
Gibson is hospitalized with bleeding around his brain.
"He was taken down hard," said Camp, with "four or five" officers wrestling him to the floor inside the club. Cellphone photos shot by patrons and posted to blogs show a person being held face down by officers in a short hallway inside the club, then show a dent in the wall where his head was apparently banged.
But a Fort Worth police spokesman said Gibson was injured outside, when he fell and struck his head because he was so drunk.
"He was the one that groped the TABC agent, "said Sgt. Pedro Criado. "He was injured by falling and hitting his head." (yeah, right...some TABC agent gets groped by a 'homosexual' and then the guy mysteriously falls and hits his head.)
"I hate to say I was afraid of my own police department, but I was," Camp said.
His description of frightened, distraught patrons just does not seem to square with police accounts of being subjected to a drunken, groin-grabbing gauntlet during a routine "bar inspection." Fort Worth is a fine and tolerant city. The police officers I personally know over there are decent, stand-up people. But today, in the Twitter-and -blog enabled process of rapid dissemination, they're getting an ugly reputation. And the flames of indiscriminate opinion about Texas being a stagnant backwater of vicious, insular, hate-crazed xenophobes dance higher. So, Fort Worth, we need some answers, please and quickly. This is no time to stonewall.
Jacquielynn Floyd(Dallas Morning News)
I for one, am sick over this..Just about the time I think Texas has crawled out of the stone ages, something like this happens..sigh*
But with people like Jacquielynn Floyd on the story, I'm pretty sure it won't disappear..
Oh..yeah, heart breaking news from the shores of Great Britian...the Queen is spending her own money to make ends meet, but if she keeps this up she'll be broke by 2012...Big fucking deal..Let her go broke, why should she be any different than anyone else? I think she should just retire to her little place in Scotland and make the rest of them get jobs.
Posted by yellowdoggranny at 6/30/2009 12:39:00 PM 15 comments:

49 YEARS AGO THIS MONTH

look what the wonderful Sling did?....he zapped 'lil Ronnie right out of the picture...is he not the bestest friend ever???? 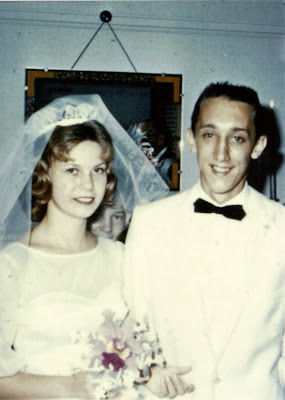 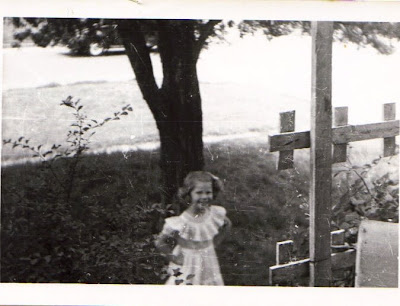 This is Jackiesue..about 5. We lived in Oklahoma..Enid, Oklahoma to be exact. This is the 2 story house we lived in and I would stick peas in my socks, go upstairs to the bathroom and throw them out the bathroom window. Thinking I'd never be found out..Well..peas roll..and they rolled right off the roof and onto the front porch. There are a ton of pictures of me with my hands on my hips. 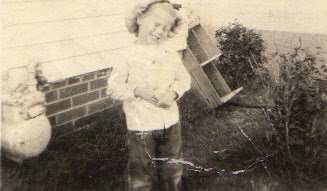 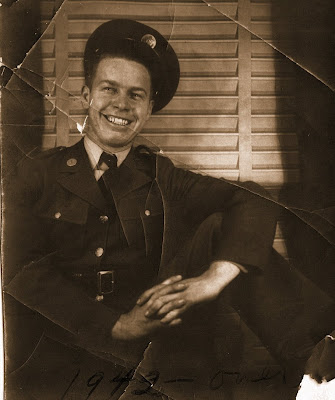 My beloved Daddy..this was taken about 2 months before I was born. See the resemblance? 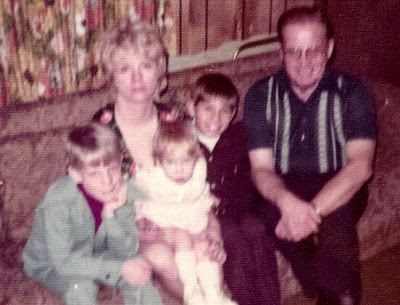 Me, Daddy and the kids. Right before the trial..I was trying to smile..Daddy put up a good front for the kids. 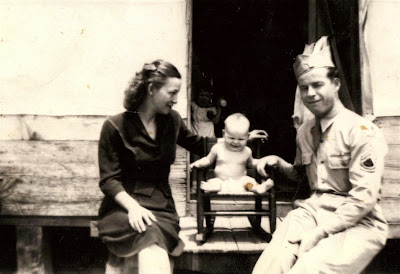 My Mother, me and Daddy. Taken in Sunnyvalle, Texas out in the country at Big Mama and Daddy Red's place. If you look real close you can see Larry Wayne in the back ground crying. He was pissed because he couldn't be in the picture. To get even with me, he hit me in the head with a cokecola bottle.(which explains a lot of my behavior later on in life.) When I was about 7-8 I happened to over hear(ok me and Mike were listening outside the kitchen window) them tell the story about the bipping I got..So I went outside and climbed up on the chicken coop and when Larry Wayne walked by I jumped on him and beat the crap out of him with a board. Yelling 'that's what you get for hitting me with the cokecola bottle' while wacking him with the board. Of course he didn't have a clue what the hell I was going on about, he was only about 2 1/2 when it happened...but by Goddess...I'm a Scorpio...I get even. 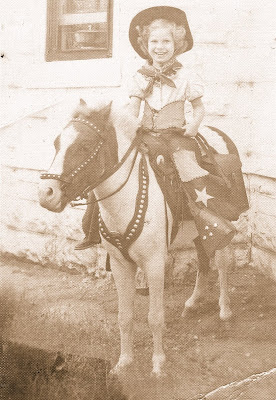 I never paid any attention to what was on the back of the picture, until I was scanning it and my mother sent this to me and on the back had written. "Enid, Okla. You went out and had this picture made on your own and we had to pay for it."
yes, I know..........I look like Shirley Temple. The only thing I remember about this is not wanting to take off the chaps and hat and didn't want to get off that pony. 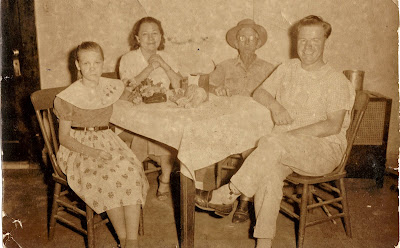 We lived in Laredo, Texas for 6-8 months..Right after coming back from Hawaii. Talk about a serious shock to my system. 3 years of 80 degree temperature and the ocean to Laredo, Texas 1950's..It was right after the international bridge between Laredo and Neuvo Laredo had been destroyed in a flood and there were still dead animals alongside the road. It was horrible. I was the only Caucasian kid in the school for 3 months, then 2 GI kids(boys) came along. Having just come back from Hawaii I had a really dark tan and very very blond hair. I was the only blond in Laredo, Texas and every where we went people wanted to touch my hair, and the girls in school always wanted to comb it during recess. Which was a good thing as it made it easier for mother to spot the lice I brought home..Laredo at the time was almost a 3rd world country. It was filthy, lots of homes had no water or electricity and my friend Modesto Modino lived in a house with no floors and it had 3 rooms. No bathroom. So she spent almost all the time at our place. There was no base housing and there were no houses to rent so we lived in a trailer park and that was horrible for me but was heaven for her. She taught me how to make home made tortillas and first time we had ever had Mexican food. Tacos and re fried beans. We thought it was the greatest thing ever. I refer to these pictures as the before tequila and after tequila. Although Daddy always had a smile on his face. That is my Daddy's Daddy, Daddy Red. He was in his 70's then. I think he stayed drunk the entire week he was there. You could buy a bottle of tequila for $2 I think...The thing I remember most about this is I had my parakeet Pete...and he could cuss like a drunken GI. What he didn't learn from Mother on a daily basis, he got from Daddy and I when we listened to the baseball games on the radio. Pete would listen to the radio on his own and could talk fluent Japanese. He would be preening and talking to himself...first a string of Japanese and then he'd scream 'sonofafuckingbitch, he dropped the ball.' He could mimic our voices perfectly.
Or my favorite(I taught him) 'fuck the yankees'...Just a barrage of Japanese and then cussing. My favorite was when he'd say "Jackiesue..godddamnit" and he sounded just like my mother. But his favorite was 'prettypete, pretttty pretty pretty prettty pretty pretty pete, fuckit.' Any how..Daddy Red had a severe hangover one morning when Pete was on a roll...and Daddy Red told Daddy..'if that damn bird calls me a sonofabitch one more time, I'm having him for breakfast.' 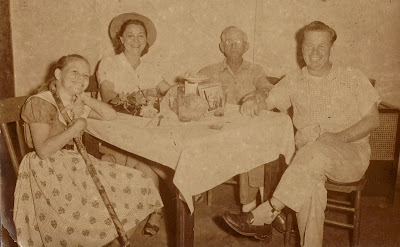 Asshole #1, Me, Vicki, Ruth, Daddy and Bubba. My first step mom and her 2 kids.
This was taken at Roswell, New Mexico. A-hole #1 was stationed at Walker AFB.


This was me on Asshole #2's parents farm. We had come out to help put up a new roof. That is our camper behind me. That's what we took to Canada for 6 weeks on our gold panning honeymoon. That's an entirely whole post on it's own..Like my hat?

Labels: jackiesue through the years

ENOUGH WITH THE DEAD PEOPLE

enough of the dead...let me turn your attention to something living..my lettuce. I have 3 pots of different types of lettuce and have had at least one salad a week from them..so good.

this is Old Corner Drug..the command center..the lady in the back is mrs. Kirk...Kirk wasn't there..Wed is the day he plays golf..Mrs. Kirk is the one that told me about valerian root to help me sleep..thanks to her and the 'root' I have slept 2 nights in a row and got 8 hours sleep both nights..I heart her.
What can I tell you? I love them Texas clouds.

this is the display that is in the West Public Library..they are fantastic.

My cream cheese blueberry charla. I don't know if I'm spelling it right, but all I know is they taste so good, that if you have one, you'll never have a moments peace until you have another one.

My 2 recliners in the new living room arrangement..I like it this way.

I have been scanning pictures to send to my aunt Leola and my uncle Hick. When I get them done I will post them here. I was so fecking cute.