An internal Pentagon study has found that most U.S. troops and their families don't care whether gays are allowed to serve openly and think the policy of "don't ask, don't tell" could be done away with, according to officials familiar with its findings.
Details on the survey results were still scare Thursday, with the Pentagon declining to discuss the findings until after December 1, when it rolls out its own plan for repeal.
The officials who disclosed the survey's findings spoke on condition of anonymity because the results had not been released.(Associated Press)

I found this very interesting.


Baron Friedrich Wilhelm Augustus von Steuben
Maybe you are not familiar with this guy’s name. He is often put in the back of the history books when it comes to other soldiers during his time period. However, this Prussian aristocrat and military officer served as Inspector General and Major General of the Continental Army during the American Revolutionary War. He is credited with teaching the Continental Army the essentials of military drill and discipline, and helping to guide the United States towards victory against the British. He wrote the Revolutionary War Drill Manual, the book that became the standard United States drill manual until the War of 1812, and served as General George Washington’s chief of staff in the final years of the war. He originally served in the Prussian Army, before he was forced to resign because of being homosexual. Since he was a soldier, he attempted to sell his services in Austria, Baden (part of the Holy Roman Empire), and France – who suggested he talk to Washington. George didn’t have a problem with this sexual preferences and hired him on to train the troops at Valley Forge. If he hadn’t, we might still be a colony to Great Britain.

Lieutenant Colonel T.E. Lawrence aka Lawrence of Arabia
This British Army officer is renowned for his liaison role during the Arab Revolt against Ottoman Turkish rule of 1916-18 during World War One. The extraordinary work he accomplished with the Arab nomadic tribes, his ability to understand and relate to their culture, and his vivid written descriptions of the events led him to be internationally known as Lawrence of Arabia. Lawrence’s public image was due in part to American journalist Lowell Thomas’ sensationalized reports of the revolt, as well as Lawrence’s autobiographical account in Seven Pillars of Wisdom (1922). Lawrence was able to achieve these goals since he understood the Middle East. Prior to WW1, he was an archaeologist who studied in Egypt, Lebanon, and throughout the Mesopotamia regions. He was well-spoken and able to speak fluently in English, French, German, Latin, Greek, Arabic, Turkish and Syriac. He helped to create an insurgency within the Arab regions against the Ottoman Turks that eventually led to the collapse of that empire following the war. While he never publicly stated he was a homosexual, he wrote about it in his book and letters. None of it stopped him from being on the winning side World War One.

Julius Caesar
Gaius Julius Caesar was a Roman military and political leader. He played a critical role in the transformation of the Roman Republic into the Roman Empire. Caesar was born into a patrician family, which claimed descent from the son of the legendary Trojan prince Aeneas. While Caesar was married a couple of times, in the writings of the time, we know that he had an affair with King Nicomedes of Bithynia (part of northwest Asia Minor on the Black Sea). While this was generally acceptable at the time amongst Roman nobility at the time, it still caused him some grief from his critics. It did not, however, stop Caesar from taking over Gaul and becoming one of the most notable military leaders in history.

King Richard The Lionhearted
Also known as King Richard I, he is the famous king that is mentioned in the famous Robin Hood tales. He is also the King who led the Third Crusade against the great Sultan Saladin and brought victory for the Christians. Of his sexual preferences, there have been conjecture over whether or not he had a relationship with the King of France, Philip II. There are writings on him sharing the same bed with Philip, though some historians claim that this was just a medieval “photo opp”. He and Philip led their armies into the Holy Land to reclaim lands that “belonged” to the Christian world and made their way into the history books. No matter what his sexual orientation, Richard’s military contributions and prowess on the battlefield cannot be questioned. He is considered the epitome of everything about chivalry.

Alexander The Great
He was everything that is considered in a great general. Leaders have been studying his tactics for centuries. And…he occasionally had a homosexual encounter. Alexander III of Macedon was 20 years old when he took the throne and created one of the largest empires in ancient history by the time he was 32 years old. Although his reign was short-lived, the cultural impact of his conquests lasted for centuries. Alexander was known to be undefeated in battle and is considered one of the most successful commanders of all time. By the time he was finished building his empire, Alexander had taken control of Greece, Macedonia, Persia, Egypt, Asia, and India. He only stopped because his men had grown weary of war and wanted to return home. Alexander was married twice, but his greatest relationship was with his friend, general, and bodyguard Hephaestion, the son of a Macedonian noble and leader of the famed Companion Cavalry. When Hephaestion died of typhus, eight months before Alexander’s own death (also possibly from typhus), he was devastated and planned on creating monuments and petitioned the oracles to grant Hephaestion divine status.

Labels: gays in the military.

WASHINGTON (The Borowitz Report) – The Fox News Channel reported today that the turnout for Jon Stewart’s “Rally to Restore Sanity” was underwhelming at best, with Fox sources estimating the total turnout at seven people.

“Our total count includes Stewart, [Stephen] Colbert, and what appear to be a few of their friends and relatives,” said Fox anchor Shepard Smith. “This has to be a smaller crowd than they were expecting.”

But immediately after Fox broadcast what it described as “live coverage” of the rally showing a nearly-deserted National Mall, viewers began to point out irregularities in the images being shown.

First of all, one viewer noticed that the live coverage of the rally was actually being broadcast a full twelve hours before the rally began.

Second, an expert identified the supposedly “live footage” of today’s rally as file footage from a Sunday in 1997 when the Mall was completely shut down for reseeding.

Even in the face of such evidence, Fox stood by its story, with Fox host Glenn Beck pointing out that the seven people in attendance were “largely elitists.”

Going to Strickly to be a judge for the Chili Cook-Off..don't think there is going to be that many..so I may live through it..will take pictures.
Then Halloween I'm going to drive around town and take pictures ...see ya later gaters.
Posted by yellowdoggranny at 10/29/2010 06:28:00 PM 5 comments: 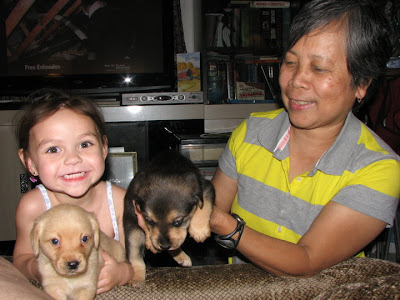 Happy Birthday to Rose....a sweet loving lady. Wonderful wife, terrific mother and adoring grandma.
And the wife of my dear dear Nitty.
Posted by yellowdoggranny at 10/26/2010 10:04:00 AM 5 comments: