I STUMBLE YOU STUMBLE WE ALL STUMBLE..monday

For Jan, Billy, Nitty and well...all of you..hahahh

Dexter's call of the wild. 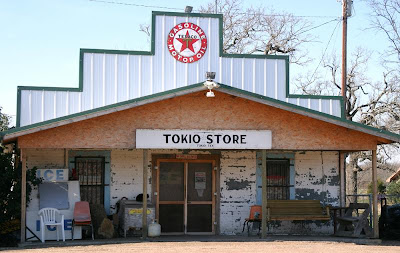 I was looking on line for Tokio Store's phone number so I could call and find out if they got their license and found this...this makes my heart swell with pride for a tradition still alive and well in Texas. I couldn't find a phone number for Tokio Store. I doubt if it's listed..most of the bars are unlisted. Keeps the bartenders from having to lie when some wife calls and asks:"Is that no good rotten sonsabitch in there?"
http://www.pbase.com/breid/texas
Posted by yellowdoggranny at 1/29/2010 06:01:00 PM 8 comments:

I swiped these off of the Tokio Store on My Space. I used to go there pretty often when I drank and when ole Bimbo Hand ran it. The main thing I remember about it was the old wooden floors that creaked when you walked on them. It wasn't as 'fancy' as it is now..Before it was just a bunch of tables and some couches and ring baloney sold out of the refrigerator.

Most of these pictures were taken at their annual fish fry. If you look in the back ground and see how many houses there are and how close they are you can see why some of the people might object to the beer license being given back to the bar. But really..they have been there for over 30 years...get over it.
They should find out if they get the license back today. I hope they get it..some traditions shouldn't be held back by people's lack of sleep. Join the party.

I may drive Babs out there and take some pictures. Well, after it warms up and quits raining. Weather is crappy again, but can't complain. North Texas and Oklahoma are getting hammered with snow and ice. Over a foot in places.

Need to check on Tex, Sooner, Joy and Tina and see if they can find their ass in all the snow.

I think this was a birthday party and this was his gift..ha.

Every one knows I love Dublin Dr Pepper. This is the website where you can find out all you want about my favorite drink. I also stole their opening line in case you have no interest in checking it out.

What makes them unique? Besides being the oldest Dr Pepper bottler in the world, Dublin Dr Pepper also has the distinction of being bottled with Imperial Pure Cane Sugar - the original Dr Pepper formula.
Dublin, Texas—also known officially as Dr Pepper, Texas for one week each June during our annual birthday celebration—became the site for the world’s oldest Dr Pepper bottling plant in 1891, just six years after the drink's invention in nearby Waco.
Nectar of the Goddess.
Posted by yellowdoggranny at 1/28/2010 04:33:00 PM 15 comments:

I wish Miss Henrietta was still here. She would be so proud of her grand kids. Dalton M. won the Reserve Grand Champion Market Goat. Every year the West kids do really good at the Mcclennan County Junior Livestock Show. This year the kids sold their animals for approximately $57,000 at the Sale of Champions. West did the best in the market goat category as nine students had goats place high enough to qualify for F

riday's sale. Dalton had the Reserve Grand Champion Market Goat. Jolee M.,Shelby W. and Kylan M. each had market goats winning first place ribbons. The M. kids are Miss Henrietta's grand kids. She never missed a showing and they showed all over the state. She never missed a football, basketball, or baseball game if one of her Grand kids were playing. She made all the games for a few years because her Granddaughter was a cheerleader.
West had two students with steers placing high enough for the sale. Payton S. had a second place steer while Christy J. had a fifth place steer at the show.
Jessika F. was crowned the new Miss McLennan-Hill Czech-Slovak Queen during the group's meeting last Sunday in the West Community Center. Her little Czech Sister in the pageant is Brooke F. her actual sister. For her winnings, Jessika received a $500 scholarship, crowns and Czech crystal from the McLennan-Hill Czech Heritage Society, state sashes from Maggie's Fabric Patch and Larry and Kathy Podsednik, a flower bouquet from Flowers 'N' Things, jewelry from Blessings, a gift certificate from Divine Designs, and a Czech recipe and folk tales book, hand-cut Czech decorated eggs and a stain glass Czech flag from Olde Czech Corner Antiques.

They're having another hearing to discuss whether or not Tokio Store will get it's beer permit back. They have had it for years and years and years, but all of a sudden they have new neighbors who say it's too noisy and they got some Judge to take the permit away and then another Judge gave it back and now their having another hearing to see if they get it back again. It's really stupid..Tokio Store is a grocery type store(old) with pot belly stove a bar and some tables and people go there and listen to bands, juke box, drink some beers, raise a little hell and go home. I hope they get it back.
State Tarok Tourney set at Cottonwood Hall. The SPJST Lodge at Cottonwood Hall (about 9 miles from West) is the site of the 2010 SPJST State Tarok Tournament set for February 6. The tournament is open to everyone, both SPJST members and non-members, ages 16 and above. The entry fee is $7 for memebers and $15 for non-members. The entry fee includes snacks and lunch. There will be $200 in cash prize money with trophies presented to the top four winners. Cash prizes are to be presented to the top eight. I'd love to say I know what Tarok is...but I haven't a clue.
West Public Library has started a paperback exchange program. Nancy came up with this idea. People keep donating paper backs and we have no more room for them on the shelves. She sells them at the book sale but the .25-.50 cents she gets for them doesn't add up to much. Lots of people buy and read paper backs and then either give them away or trade them. So she figured we'd get in on it and the books that are traded are added in on our circulation numbers and help us get funds and grants. Nancy is doing such a great job. She's started a Friends of the West Public Library and the ones that join will be used as slave labor. Ha..Not exactly, but we will be able to pick out a section of books that we will be in charge of and will be expected to keep them in alphabetical order, straightened, dusted, etc. We'll all take turns doing the windows, cleaning the hall, the bathrooms and the room they rent out for Showers, receptions etc. That way it doesn't all fall on her shoulders to do. I go up there and shelve books and help out when she needs it, but she's been using people doing community service(speeding tickets, etc.) and most of them are kids that are in trouble and they get sentenced to so many hours of community service and they are pissed and don't want to be there and don't care if they do it right or not. Nothing worse than looking for a book by Patterson and finding the book your looking for in the paper backs or in the W's...
The West Lions Club is meeting at noon Thursday at Nors Sausage and Burger House. The West Library Board is meeting Feb. 8 and I think I might attend. Might attend both meetings. See what kind of mischief I can get into.
The Lady Trojan High School girls power lifting team placed first last Saturday in their Blooming Grove meet. Get this: Lady Trojan lifters over 220 pound class, Tianna R. 1,125 pound total.
We do really great in this competition every year. Kolache fed girls rock.
Lady Trojan basketball team are in contention for the playoffs. They finished the first have of the 7-AAA District in third place.
Paxton Pustejovsky turns 3 years old with a Thomas The Train themed party. We have a new baby in West..7 pound 2 ounces and 19 1/2 inches long Sophia Isabella Loya. Ti Brock turned 8 and Ray and Betty Sorcek are celebrating their 45 Anniversary. Plus a set of triplets Abby, Ally and Audrey are celebrating their 8th birthday too.
89 years ago Mr. and Mrs. Joe Wolf opened a new grocery store at the Capital Service Station Building on South Main. St. (in the 70's, 80,'s it was known as the Capital Bar and Jackiesue's favorite hang out.)
Here's a nice buy if you want to live in the country. 7.9 acres with 2-story, 5 br., 2.5 baths, office, 2 barns, storage building, in-ground pool, covered patio and much more.10 minutes to West, 10 minutes to Waco. $252,900.
But the best news of all?....Community Grocery has Wright bacon on sale for $2.89 pound. I'm so excited I'm giddy. Baaaaaaaaaaaaaaaaaaaaaaaaaaaaaaaacon.
Well, that's all the news for the tiny town of West, Texas. Come on down for a visit...buy you a Dublin Dr Pepper...
Posted by yellowdoggranny at 1/27/2010 07:55:00 PM 12 comments:

I TOLD YOU FOREST GUMP WAS AN ASSHOLE