No, I'm not talking about the republican's running for the Presidency.I'm talking about my run in's with folks from the other side...I think...
When I lived in Portland, Oregon I was a single mother with two young boys..at the time we moved into the house David and Thom were 2 and 3.. I had been looking for  a place that I could share with two other waitress's..one with a daughter about 6 and one with no kids. We found this 4 story old house that had at one time been a single family home..over the years it had been sold, rented out and had become a sort of boarding house..it had so many bedrooms and bathrooms I have lost count..winding stairways and an attic with a commode in the middle of the room..It had rooms that to my way of thinking had no reason to be there but I'm sure back in the 1800's there was a reason for it..it was scheduled to be razed in about a year so we were more or less allowed to rent it for $50 a month to be caretakers..this was spring of 1968. We all moved in and things were 'just perfect,' Everyone had their own bedroom..there was so many rooms you could always find a place to get away from everyone else, if you wanted privacy. I had the bedroom that was off the stairs and off of my bedroom was a room we called the sun room. It actually looked a lot like this room, but it was finished and had benches along the windows..it got direct sun..and because of the shape of the windows it had no curtains..This room should have been the warmest room in the house..it was the coldest..you could see your breath when you went in it..I had planned on using it to keep my books and read and draw...had to wear coat and gloves to stay in there..so it wasn't used..it's funny that no one thought it was strange..just well, can't use that room. The boys and my room mates daughter was the one that brought our invisible room mate to our attention..They often talked about their friend that had a cough and didn't like us smoking in the house..We just figured they didn't like it and was using him to get us to quit smoking. Then the ashtrays started appearing in the front yard..furniture would be moved around..rearranged actually.. When we asked the kids they said 'the boy' didn't like smoking and he wanted the furniture the way it was when he lived there..OK.....So we said why doesn't 'the boy' like smoking? They said he was sick and he coughed all the time and the smoke made it worse. So we quit smoking in the house..we also learned to leave the furniture where he liked it..Then things got a little weird..I was in the downstairs shower getting ready for work and  had my radio sitting on a ledge by the shower..blasting rock and roll...click...off..I turned it back on, got back in the shower and click...off...then it came back on but you could hear it going thru stations until it was on classical music and then it stopped..I got out of the shower and said 'now you stop that, leave my radio alone'....and it went back thru the stations and back on rock and roll. The boys and Rosemary's baby(we called her that so much that I have forgotten her real name) were always telling us stories about 'the boy'..he went to school..a big boys school is what David (oldest) said..but he had to quit going to school because he was so sick...By then I'm thinking I need to talk to the people that rented us the house..a rental agency. So I went to see them and the lady was pretty evasive at first, denying knowing what the hell I was talking about..finally she admitted that back in the late 1800's the family that had build the home had several kids but the oldest had  some sort of lung disease, had to drop out of university and eventually died..in that damn freezing sunroom..We were getting close to the having to move out of the house because they were going to raze it so we figured we'd just stay there and move when we were supposed to.
One day while the kids were playing in the front yard with our 2 half husky/half wolf dogs, Simon and Garfunkel I took a bunch of pictures..when I got them developed we were shocked to see that there were curtains in the window in each picture and someone standing in the window watching the kids play.. holyfuckme..So we started packing up and started moving out..This did not make 'the boy' happy...he liked having David and Thom there..Rosemary and her baby had moved back home and the other roommate had already moved ..So it was just the 3 of us..'The boy' was starting to be destructive. He would unpack boxes, toss things around..and we could see shapes of him everywhere..like his anger made him stronger..we would have to pack a box and move it out of the house..Finally the last day I had to go down to the cellar and get some old trunks that I had been collecting..must have been 4-5 of them..The boy was shoving  things around, appearing all over the place and you could actually feel him in the room...Fuck it says I ..and left the trunks and got the fuck out of Dodge...Ghost? Spirit? Spook? Only the shadow knows.. 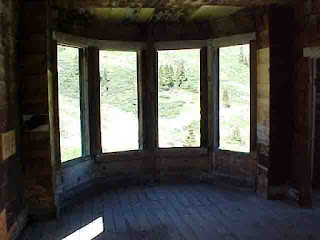 Interesting...
Still not a believer; but interesting.
the Ol'Buzzard

I believe. I think we all leave a little bit of ourselves everywhere we live, which is why I make a point to say goodbye and thank you to every home I've ever moved from.
Great post!

I've heard too many stories like this to doubt them.

Funny I'm just starting to write about the presence we had in our old house in Aylmer. If I had not had the experience myself I'd probably be skeptical but I don't rule anything out now.

Great story...but...I mean, a ghost that is allergic to smoke? I'm skeptical, but I wish I had an experience like this. Just as I would love to be beamed up into a space ship by aliens. But, neither of those things have ever happened to me, so...

That's not to say it didn't happen to you.

Oh, and by the way...never...NEVER go into the cellar alone!

Whoa -- what a great ghost story! I'd have left those trunks behind too!

holyfuckme indeed. This is way beyond anything I've experienced, this is actual contact. And he sounds like an honery little shit, although I do feel bad that his house was probably eventually torn down. I wonder where ghosts go when that happens...

Gee, if you had had taken the trunks you could have warned him about them tearing the house down and invited him to come along in one of them and had someone to clean the house for you. :P

those trucks were expensive then, can you imagine what they would be worth now? they were the big rounded top ones with stickers from all over europe..dang nitty..never thought of that.

Food for thought... never know what's going on in the world beyond our rather limited 5 senses...