Dexter Roycroft's expression on asked what he thinks of Donald Trump 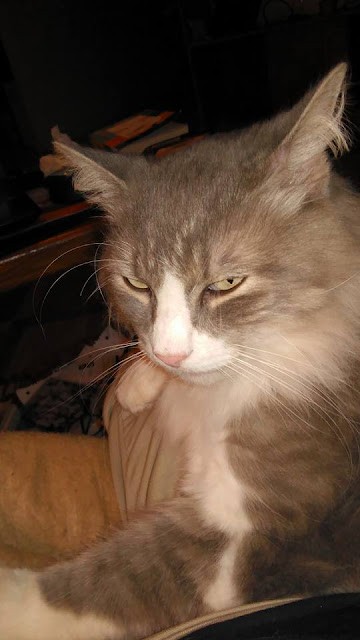 I thought that was Dexter's happy face.

I love cats. Cats come and go as they want. They don't back down from a fight. They know who rules the house and they get humans to feed them and let them out all time. They can sense who loves them and those who hate them. It's a cat's life. Trump sucks.

No one can pull the fur over Dexter's eyes! He's too smart.

Oh, and you know what, it's news here in Canada too about the West fertilizer plant fire that led to the explosion being thought to be arson now. After supper tonight on the CBC Radio show "As It Happens," they interviewed Pastor John Crowder of West about the impact this news is having on your town. He was thoughtful and well-spoken.

One picture says it all.
Dexter is beautiful, and you can tell he is wise.
the Ol'Buzzard

I've seen that look before, that cat is about to administer a teaching moment.