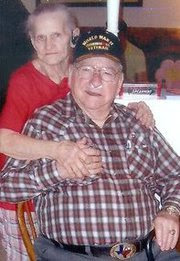 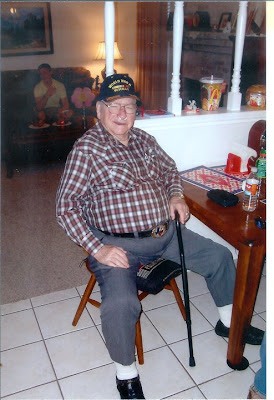 This is my beloved Wowo with her beloved brother..Who passed away night before last. They were the last of my Daddy's brothers and sisters, and now it's just Wowo. My pistol packing, red mustang driving, blue tooth in her ear with gun shoved under the seat of her car 87 year old Aunt. To give you a hint of who I am and why my humor is off the wall..they had a bet as to who was going to die first. When she heard he had died, she said 'well, guess I won.'..her comment when she was told he would be cremated and put into one large urn and several smaller urns to give to his kids and to her, was ' I'll probably get the one with his ass.'....see where I get it from... My uncles..oh man..my uncles..they relished in screwing people over..and if you could screw a family member over, it not only was more fun..it made a better story..Example..Daddy was the oldest and was living in San Antonio when both the brothers visited and Uncle Hick told Daddy as Uncle Jack drove off in his new used car bought from his brother...'that piece of shit won't make it home.' and laughed his ass off....sure enough..Daddy gets a phone call from Jack bitching because his brother sold him a junker...but he was laughing..Daddy said what the hell are you laughing at he sold you a junker that didn't make it 150 miles before it blew up...Uncle Jack said...'yeah, but wait till he tries to cash the check, the account is closed.'...that's my uncles.
My Daddy would be 93 years old the 28th of June. All of his brothers and sisters are with him now except for Aunt Leola(as much as she loves them, she is in no hurry to join them)..I asked her if she quit her job yet..(she runs the register at a family owned Hardware Store.)She said I'd be dead in 3 weeks if I quit..She still works 4-5 hours a day 5 days a week..She would work more I think but they won't give her the hours..They worry about her as much as her family does. Uncle Hick would call her every day or she would call him...I think she will miss that more than anything..I'm going to pay the $5 extra to get more minutes put on my phone so I can start calling her every day. I can't tell you how much I love this woman..who has been the bedrock for me my entire life. If it wasn't for her when I was 6 months old I would have been put in a foster home in Oklahoma. Daddy was over seas fighting and mother was entertaining the troops..so to speak..she left me and my 8 year old half sister alone in a motel for over a week. We got rescued by the red cross and my Aunt Leola drove in nellybell(her old back rattle trap pick up) from Houston, Texas to some where in the middle of Oklahoma and brought me home. I stayed with them till I was 4..Oh..she's also the one who gave him the nickname of Hick..His name is Bob..when he was little I think Big Mama(her mom) said something along the lines of they couldn't get Bobby to mind..and Wow0 said 'cause his head is as hard as a hickory nut.'...and he's been Hick every since. The only thing I am grateful for is he was stateside when I was born, cause they named me after my Uncle Jack who was still overseas..I would have grown up being called Hickey Sue. By the way..I was no close to my Uncle Hick..we did not see eye to eye..on anything..(republican, Baptist, Mason)So at exactly the same time he passed away I was woke up by either a bite or a pinch..sat up in bed cussing ..'what the hell?..Dexter?..'nope Dexter not to be found..I looked on my arm and it was sort of red..but no bug, nothing..When Wowo told me what time he died..I knew he had came to give me a last shot before he left. Pinched me..good and hard too. There is a tiny bruise on my arm..Bastid.

Granny your family is rich in character history, and I love your tales about them.

As to the pinch there at the end...just damned spiteful Republican shit. That's all I have to say to that. I personally am passing over and doing some devilry myself to a couple of conservative family sheep...except it's not going to be a pinch, it's going to involve a swift reaming of certain never seen places.

Great post about your uncles and aunt.
I can just imagine what they're all up to in the afterlife.

Condolences Granny. Your family sounds great. My father would have fit right in.

RIP. Though I doubt he will. The rest of them have had time to plan things for him in the afterlife. Got a feeling he's going to pay.

Sorry for your loss. The pinch? I'll have to remember that one.

Sorry to hear about your uncle Hick. Sounds like there's one less hellraiser in the world, but good thing you and Wowo will be carrying on.

What a Hell of a story. Fasinating reading.
Took my mind off my woes for awhile.
They all sound like "Good People" and Bless your aunts heart.
She is made out of tough stock.
The apple didn't fall far from the tree... for sure!
You both have BIG hearts too! :0)

May he have found the Summerlands. May he be playing with the faeries!

anne i can believe him doing a lot of things ...but not playing with faries..unless they carried cigars..
I figure they have a penny ante poker game going, which they always did..wonder if Uncle Hick will steal the pot again..wow..my daddy, wanda, estelle, jack, joe and hick all together...I expect a thunderstorm any time..

Rest in peace Uncle Hicks. I hope you get the urn with the part that had the great sense of humor.

My thoughts are with you and Aunt Leola.

My condolences on your families' loss. Take precious care of Wowo.