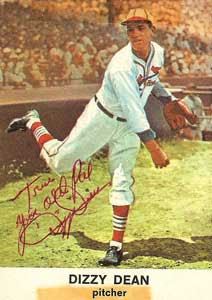 This man is the reason why watching Baseball on TV or listening to it on the radio is fucking boring. Dizzy Dean. You don't know what you missed. Hearing that a player 'slud' into third base, or the coach 'nanchlatly' walked to the pitchers mount or commented that when ever he flew over Arkansas he had the urge to take a pee. Well..he couldn't get away with it today and I think the comment he made about Arkansas got him tossed off the air. And I'm sure right up until his death he couldn't understand why everyone was in such an uproar about it. Some of the best memories I have are sitting around the radio with my Daddy listening to Dizzy call the games. They are probably the happiest times of both our lives. We loved ole Dizzy...Oh by the way before he became a sportscaster, he was one of the best pitches ever. Oh...and like me..he may have been born in Arkansas, but we're Texan's in our hearts and souls.

"I never keep a scorecard or the batting averages. I hate statistics. What I got to know, I keep in my head."

"Anybody who's ever had the privilege of seeing me play knows that I am the greatest pitcher in the world."

"All ballplayers want to wind up their career with 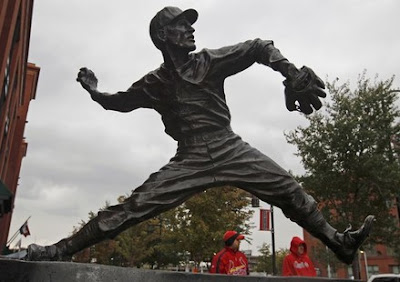 the Cubs, Giants or Yankees. They just can't help it."

"I won twenty-eight games in 1935 and I couldn't believe my eyes when the Cards send me a contract with a cut in salary. Mr. Rickey said I deserved a cut because I didn't win thirty games."

"It puzzles me how they know what corners are good for filling stations. Just how did they know gas and oil was under there?"

"Let the teachers teach English and I will teach baseball. There is a lot of people in the United States who say 'isn't' and they ain't eating."

"Mr. Rickey, I'll put more people in the park than anybody since Babe Ruth."

"Son, what kind of pitch would you like to miss?"

""Sure I eat what I advertise. Sure I eat Wheaties for breakfast. A good bowl of Wheaties with bourbon can't be beat."

"The doctors x-rayed my head and found nothing."

"The dumber a pitcher is, the better. When he gets smart and tries to experiment with a lot of different pitches, he's in trouble. All I ever had was a fastball, a curve and a change up and I did pretty good."

"The good Lord was good to me. He gave me a strong body, a good right arm and a weak mind."

"Well what's wrong with ain't? And as for saying 'Rizzuto slud into second' it just ain't natural. Sounds silly to me. Slud is something more than slid. It means sliding with great effort."


Quotes about Dizzy Dean
"When ole Diz was out there pitching it was more than just another ball game. It was a regular three-ring circus and everybody was wide awake and enjoying being alive."
-- Pepper Martin

"You were attracted by the graceful rhythm of his pitching motion; the long majestic sweep of his arm as he let the ball fly; the poised alertness after the pitch. That was what counted and you knew it when batter after batter swung ineptly at pitches they couldn't even see."
-- Editor of the New York Times

"As a ballplayer, (Dizzy) Dean was a natural phenomenon, like the Grand Canyon or the Great Barrier Reef. Nobody ever taught him baseball and he never had to learn. He was just doing what came naturally when a scout named Don Curtis discovered him on a Texas sandlot and gave him his first contract."
-- Red Smith
Posted by yellowdoggranny at 1/22/2012 04:04:00 PM

I don't know why when I copy and past this is happening..this is new and it pissed me off..just highlight the text and it will show up..anyone know how to fix this?

Sorry, YDG, I don't have a clue. I've seen this happen on other people's blogs too.

But still enjoyed your reminiscences about Dizzy Dean! He sounds like a real character.

Well you are telling on all of us who remember him. I too used to sit with my grandfather and listen to him. My grandfather thought the sun rose and set on Dizzy Dean.

The highlight thing...try copy and pasting into Wordpad, and then copy paste that into your post. Just a thought...not sure it will work. But sometimes when I am having a text problem like this, running it through Wordpad seems to solve whatever problem I'm having. No clue as to why.

BTW, flying over, driving through or even looking at a map of Arkansas...makes me want to pee.

What a great post, it was worth squinting to read the quotes (I don't know how to fix it either, it could be your black background?)
I love the quote about the gas stations.
Makes me want to go read up more on Dizzy.

Paste it into notepad -- and then recut and paste it from there - the Cut and Paste is "too smart" for it's own good and picking up formating codes from where you cut it from.

I never saw Dizzy Dean play or call a ballgame - but I've always loved his quotes.

I agree, baseball is boring unless you go to the game. Little League is good though.