"Collective bargaining in the public sector is not a right...it's an expensive entitlement."Wisconsin Gov. Scott Walker, insisting he was correct to support anti-union legislation even though he's almost certain to face a recall vote in June(National Public Radio.
http://www.investopedia.com/articles/economics/09/unions-workers.asp#axzz1jDMmHemn
"What a jackass. I hope they recall him and make him leave the state. Just don't send his jackass ass to Texas, we have enough of them."
CASE IN POINT.
"There has never been a more ineptly orchestrated, just unbelievably subpar campaign for president of the United States than this one.:..Unidentified senior adviser to Gov. Rick Perry's presidential campaign, reflecting on the Texan's abysmal showing in Iowa's GOP caucuses. (The Dallas Morning News) 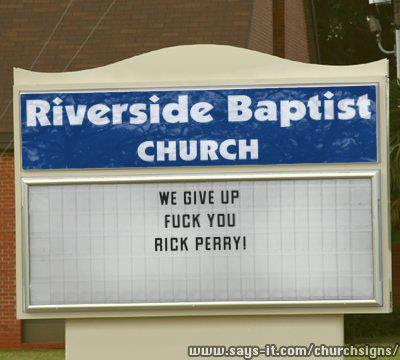 I don't want to make black people's lives better by giving them somebody else's money. I want to give them the opportunity to go out and earn the money." GOP presidential hopeful Santorium, introducing race as a consideration in federal entitlement reform.(CBSNews.com.
I think these are the jobs he had in mind. and then we have THIS. "Does anybody think that the reason that we got in such a financial mess-- the worst financial crisis since the Great Depre
ssion, the worse economic crisis in a generation---that the reason was because of too much oversight of the financial industry?" Obama, explaining his decision to bypass Congress and announce the recess appointment of Richard Cordray to head the new Consumer Financial Protection Bureau.(whitehouse.gov.)
And for all you assholes that acted like President committed a treasonous act, here's some stats for you.
The more I listen to some of my friends that I had considered pretty damn smart and then read on Facebook how they can't stand President Obama because they saw a picture of him not putting his hand over his heart at some function, the more I think I need to pick some new friends. I am disappointed in them and their thinking..and wondering how in the hell I could have been so wrong..sigh*
fuckme till I tilt.
Posted by yellowdoggranny at 1/11/2012 10:24:00 PM

Hello, old friend. I'm going to start blogging again and wanted to let you know. Apparently, blogrolling.com went out of business, so once I figure out how to start a blog roll again you'll be on it. Hope all is well!

It makes me not trust US history I learned in school. I remember Reagan as a crappy president who drove the US into debt. Now that he's dead, all I hear is how great he was.

You would give up friends for a politician?

Tell it like it is, YDG! Have you heard the speculation that if Romney gets the GOP nomination, he might pick Santorum as his VP running mate in order to pick up Teaparty votes? GAG!!!

read on Facebook how they can't stand President Obama because they saw a picture of him not putting his hand over his heart at some function
That is pure BULLSHIT, who gives a fuck?? If that's their bitch, then they got a serious problem between the ears!!

Have to agree with MarkD60 about Washington National Airport. What pisses me off is they said it wasn't named for a president so they could rename it for St. Ronnie. What was Washington, chopped liver??? That was the biggest insult to people working aircraft ever after what he did to the air traffic controllers.

YDG, I don't understand American politics but it does seem to me that your election process is too long, too expensive and way too painful.

I have to agree with Francie M.

Its way too long, too expensive and way too painful... ...and produces nothing worthwhile.

My son and I just signed the recall petition for Fitzgerald, Walker and Kleefish. I don't know about Fitz, but they already have enough names for the recall of Walker.

everyone expects obama to be able to put square pegs in round holes.

two of our major federal parties are selecting new leaders and i don't have a feckin clue who all the candidates are but i know who your republican candidates are.

who gives a shit.

The bright side is, if "0bamney" gets the GeOPapist nod, no change of tactics will be necessary at all: The Jews'Media just has to trot out that lame-ass "Whitie be ALWAY mothafuckin' pickin' awn me!!!" nag for an encore run before sending it back to pasture on PBS weekends.

Granny,
I have a great friend with whom I do not discuss politics - actually,
cannot discuss politics with. Charlie is just too obtuse and unyielding in his views that communication becomes a tiresome task. Another ass-ociate Jim, I barely speak to because he is right and everybodys wrong - You know the type.
These people are poison and totally
negative - I avoid them. Do the same.
As to Reagan - naming an airport after him is ironic as he fired the PATCO controllers (I had to cross their picket line as a USAF
controller).
The GOP also forgets that Reagan raised taxes a LOT - and the economy got better and the unemployment rate went down.

Anyone that thinks they understand our folitics is a damn fool.

America was an experiment, the forefathers knew that, it's going to topple and it should.

Did they really think Obama could fix all the messes that the other presidents made in a few short years? He probably could have if he could have fired all the cabnet and started fresh! And I really don't want another religious man in office since they can't seem to keep church and state apart!

When dealing with Idiots, just try to blink and breathe. And step off before you slap the shit out of them.