A sad day in West. The West Fraternal Auditorium is closed..after 35 years. It opened in 1977 and was the location for countless dances(both polka and country)along with serving as the site for numerous wedding receptions, parties, bingo and other community functions.( I used to play bingo (not often) with my sister Donna and our various kin folk. Mostly my step grandparents, Viola and Papa Tony Maler. Viola didn't want Papa Tony to drink, but that never stopped me from making sure he did. I'd always sit right by him and let him drink my beer. Good thing he liked Lone Star Light..not that it mattered to him, I'm pretty sure he didn't care what it was. Every now and then she'd look down at us and say 'You're not giving him beer are you?'..and I'd say nope, not me. I'm sure there is a fine difference between me giving it to him and me buying it for him but I never told. Donna was insistent that I would have a good time if I went. After about the 3rd time I said the only way I could do that again was to get really really drunk before hand.)
A lot of big name bands played there, like Earnest Tubb, Steve Warner, The Bellamy Brothers, Restless Heart, Eddie Rabbitt and Willie Nelson. The rest of the time local Polka and Country bands played. Right up til the end they played over 50 Dances on weekends.
And no I never went.
West is building a new athletic center at the West High School.
Coaches are needed for West League Club teams. I think they need 2 coaches to coach the girls from age 11-12. Years and years ago I was Mike A. assistant coach for T-ball. Every now and then some guy will call me the T-ball lady and I'll know he was on our team. It was so much fun. I had to quit when I went to work at Hastings.
The Boy Scouts are still collecting cans and the Catholic Brothers and Sisters United from St. Mary's are selling drawstring backpacks as a fun raiser to help with the expenses of DCYC 2012.
West Band Boosters are collecting metal scrap. Any type of metal and aluminum is accepted, but no plastic, wood or glass.
The West Public Library is having a Art Show. I was in there today and took some pictures. I posted them on Facebook, but will post them here too. We really have some very talented artists here ..There is a glass bowl with beautiful painted eggs. There was a sign that said please don't touch. I wanted to see what they were made of and asked Nancy as I was touching them what they were made of..and (she's so goofy) she took the lid off one of them and clinked it on the other half and said it's glass can't you see?..I said brilliant, your telling me not to touch them by showing me their breakable by clinking them together?..like I said..goofy..and here is all this beautiful art, and on the counter is a stick figure in purple that she had drawn(had it in plastic cover, looking very official.) for our enjoyment. ..goofy..
We have some cute babies that were born ..Ethan Samuel Rodriguez weighing in at 7 pounds, and 18 inches long..and Brody Michael Taylor was 6 pounds, 11 ounces, 19.5 inches long.
Amanda Christine Mynar is going to marry Ricky Edward Grones,Jr. on April 21st at St. Mary's.
Rylie Anne is celebrating her 1st birthday. and "Pop" is celebrating his 70th.And the twins Laison and Maddison Uptmore celebrated their 8th birthday. West has so many twins, I think there is something in the water.
The West Lady Trojans won first place in the Midway softball tournament last Saturday with an 11-2 victory over the China Spring Lady Cougars. They will play Fort Worth Nolan 10 a.m. this Thursday. Then they will play on Friday against Highland Park, and Saturday against Magnolia. Go Trojans.....The West Trojans picked up 5 wins in 7 games and finished second in the Waco ISD tournament at Veterans Field(Baylor) in Waco. They have a slew of games to play this week..and will get to play some of those games at the Ballpark in Arlington (Home of the Texas Rangers)..I'm so proud of these kids 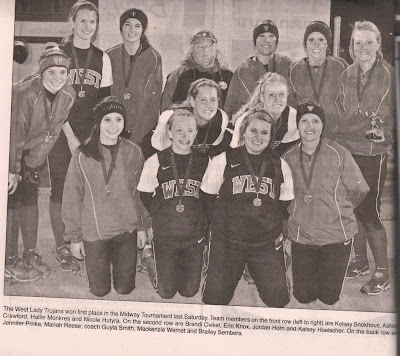 West Food Mart has tuna fish on sale for 59cents a can. I got about 12 of them so I could keep his royal highness happy. Usually if I want him to come in from outside I rattle his treat bag and he comes hauling ass..Now I stand on the porch in the high squeeky voice that people use to talk to their animals or baby's...'want tuna ? tuna tuna tuna?'...if you get in his way he'll knock you on your ass. He looves his tuna.
And if all of that isn't enough how about this for a nice home:1414 Jane Lane 2,066 sq.ft.3/2, 2-car garage, with new appliances and new vinyl flooring..$140,000. I'm thinking this one might be a fixer upper..no one puts in vinyl any more.
Ray's Electric & Plumbing is still for sale and it's gone down again in price to $115,000, which includes 2 leased retail store fronts.Owner will finance.
wow..here's a good one..reduced.140 acres with brick home and pool. Rent house include. Good oats patch with balance heavily wooded. Deer and turkey roam this place. Older barn, live creek with stock tank. Paved road frontage and also gravely county road in back of the place. $449,000. Dang I wish I had the money for that.sigh*:(
Something that has nothing to do with West..but so happy about it..The Lady Bears(Baylor) basketball went 30-0 all season..undefeated..how great is that..Of course I'm sure that our 6ft.8 inch Brittney didn't have anything to do with it..Best player in college bar none.
Ok...It's late, I need to start getting ready for bed..Dexter is out playing with his Opossum buddy and need to get him in. See ya Wed.
Posted by JACKIESUE at 3/05/2012 10:15:00 PM

This beats the hell out of that test pattern.:)

What The Future said.

I laughed at Dexter's love of tuna -- and he's got an Opossum buddy now? He's an equal opportunity friend! And go, West Lady Trojans!

I've always wanted to live in a place where it was warm enough to have a pool.

I love Restless Heart! They remind me of when Derwood and I first got together. :)

I don't like it when traditions are closed. Maybe they could make it a museum to times past.

I love it when you do the news Jackie!

My great (Kentucky) grandmother was a Presbyterian and she wouldn't let her husband drink - but he kept his whiskey bottle hidden in the coal shed, and made numerous trips out each day to fill the coal scuttle.

Sounds like your cat eats better than I do!

Thank you for the news from West!