GG and Dylan at WEST Fire station and Pizza House. 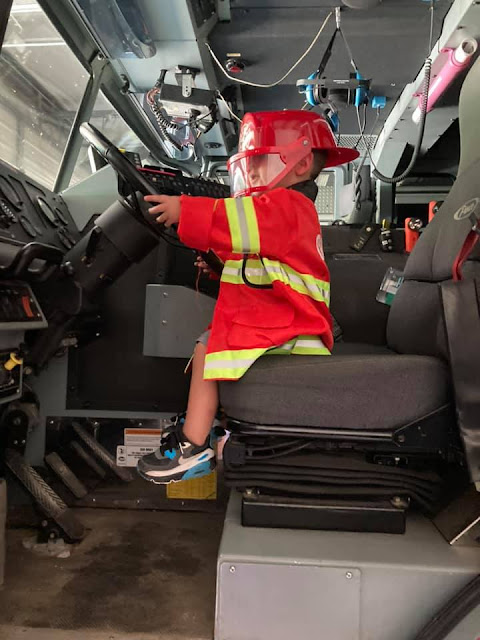 I bought the firemen's outfit for him and his dad and I took him to the West FD and omg...this kid was in hog heaven. He heard them talking over the radio and thought they were talking to him and was so stoked. Wish I could upload the videos cause to see him walking between the trucks, seeing all the hoses and the firemen's suits tucked around their boots and the look on his face is priceless. 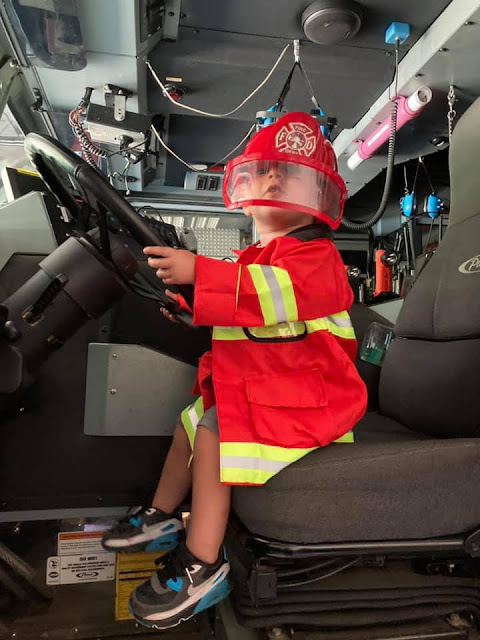 first thing he did was turn the blinkers on. 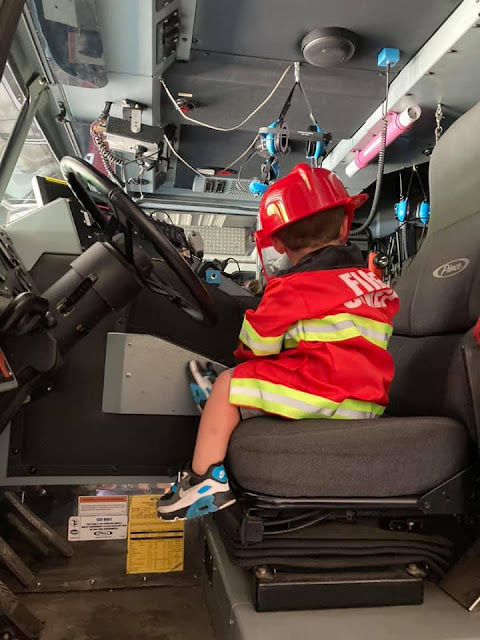 The fireman's outfit came with flashlight, whistle, little ax, badge and name tag along with a fire extinguisher that actually squirts water. Tyler said he will shut bathroom door, then blow the whistle and tell Dylan, there's a fire in the bathroom. He will put on his coat, hat with ax and extinguisher and run to the door hack at the door with the ax to get in and squirt water in the bathtub to put out the fire. We're going to teach him to rescue Abby next. The kid is obsessed with being a fireman. I think I did good. 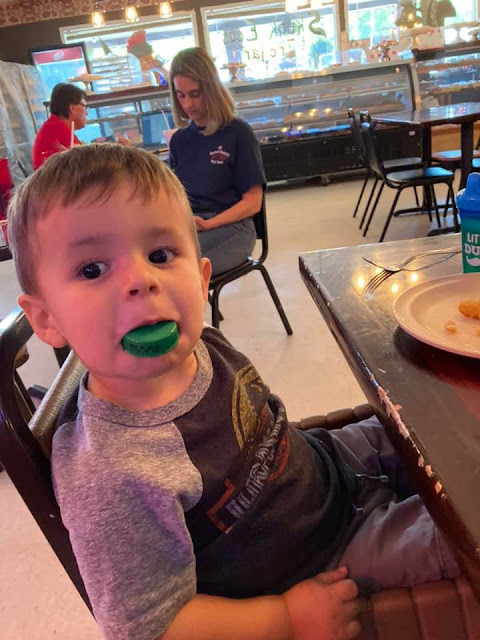 showing off for gg's while waiting for his pizza. Told him we were at Pizza House and every time some one would walk by he'd say We at Pizza Hoooooouse..'.. 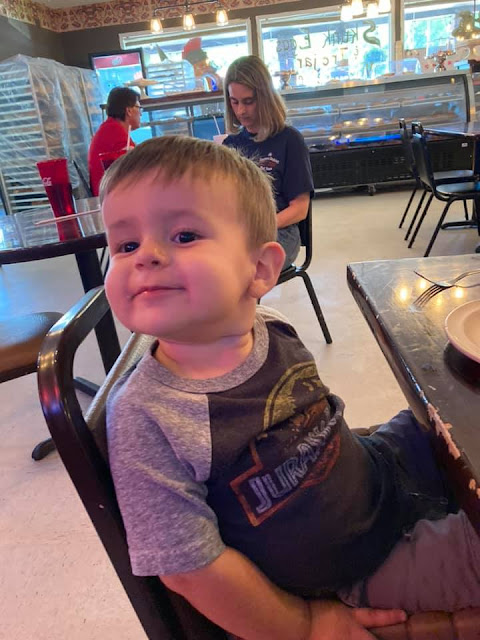 I took him over to the Bakery part and he got to see koladkis.(Kolache's) and they were fine but he saw her gigantic rolls and it was all over with. He wanted a Birthday Cake Roll. SPRINKLES .. Then we went into the room with all the little machines full of candy, toys, tattoos etc. I call them kiddy slots...he was knocked out by putting quarters in a machine, twisting a knob and sticking a bowl under under it and candy plopping into it.. they are called doggie bones. Like biting into a sugar cube. He was so happy. We started out the day with a trip to the West Library for Story Hour ..he got to make a face on a moon, eat snacks and listen to a story...then lunch and then to the fire station. We would have been able to let him have a ride on a truck but the guys were out on a brush fire call. Next Wend. I hope. Picking up Abby Sunday night and she will stay till Wend. and then go to Nana's till Friday and then her aunt will have her. Will be like this the rest of summer. July 10th thru 15 we will all be in Port Aransas and boy are we looking forward to that. Abby has been at Farm Camp, Olivia is taking tennis lessons and has cheer practice and Abby is having softball hitting practice. Olivia is spending most of time with her mee-maw who retired and is taking tennis lessons with her ...Next month I will have the gg girls and one day a week dillweed...Taking them to the auction barn to see all the animals, to our Czech Museum, the park, to a few museums in Waco. Might take them to Texas Ranger Hall of Fame when we have dillweed. He will love that. After summer I will be checking into rehab for my broke ass, tired legs and sore feet...

If you want your kid to grow up to be a fireman, yeah.

Why wouldn’t we want him to bra fireman?

be a ..fecking phone

Wow, looks like Dylan had the time of his life! So cute! What little kid doesn't love firetrucks and fire fighters? And then kiddy slots after that, LOL!

Sounds like you're in for one BUSY summer, Jackiesue!

Oh What a great birthday! He'll never forget it! Sounds like your summer is going to be full of hugs and GG kisses and BUSY. Have a wonderful time!

What a wonder day! And looks like you had as much fun as Dylan.

After summer I will be checking into rehab for my broke ass, tired legs and sore feet... and big-ass grin!

There, fixed it for ya (big-ass grin)

Love the pictures. The wannabe fireman had the time of his life. Good Great Grandma

thanks everyone...we did have a great time and his mom said he's still talking about it.
not his birthday...just another day with gg...
summer for us starts this sunday..hot damn.