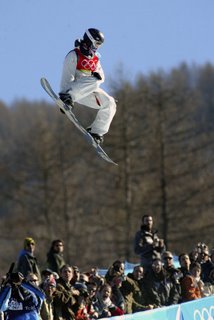 Lots of news today..on tv and in the paper...The good news is, the kid with 8,000 shinny white teeth won gold in the hotdogging snowboarding what ever it is called..the flying tomato is his nickname...he knows about 17 words. Dude, man, really, most excellent..and hi mom...are a few...the bad news is ...Nancy Kwan had to drop out, apolo fell and didn't medal, and our own sweet 62 year old Granny Luge took a nasty spill doing trials and broke a wrist and banged herself up pretty bad...mostly her heart was broken.It wasen't so much about the medals as it was setting the record for being the oldest Olympian...and the fact that she is now in debt for about $100,000 as she had no sponsers..she did this all on her own..The red hat club of women over 50 were disappointed that she couldn't make it too...she was the standard bearer for all women over 50...well, not for me as I don't need no stinking standard bearers...but do feel bad for her..but I bet she gets some sort of commerical deal out of it..as she is pretty, smart and brave..so she will be hawking depends, or denture cream or maybe a woman's viagra...
But maybe the funniest peice of news is about Grandpa....Al Lewis....seems when Al got the job to play Grandpa on the Munsters, he was afraid he wouldn't get the job as he was younger than Yvonne De Carlo who would play his daughter..so he added 13 years to his age...learned some great events at times when he would have

been a young man..when he was actually a kid...and made up the biggest lies you ever heard...He said he worked as a radio actor, circus clown, trapeze artist, medicine show"professor," and union organizer in the south. He said he championed the cause of the Scottsboro Boys, nine black teenagers accused of raping a white women.All this while he was working on a doctorate in child psychology, which he was said to have earned at Columbus University in 1941 or 1049.The university has no record of this..
There is no question that in his not so later years, he backed up his convictions with his presence and his money.He advicated prison reforms, vigorously opposed the Rockerfeller drug laws as unneccessarily punitive, and argued both against police brutality and for police salary increases.I don't think it matters how many years he lived..it was what he did while he was living them.So Grandpa...82 or 95.....we will still miss you....
Posted by JACKIESUE at 2/13/2006 09:40:00 AM

The guy who won the snowboarding thing, I see why they call him the flying tomato with the bright red hair! As for kwan, I feel bad for her but what can ya do...

Shaun White! He's sooo awesome! That kid has no fear!! He was featured on MTV's cribs a while back. I had never heard of him, but had an idea that I would soon. Michelle Kwan.. Yeah..Heartbreaking.. Poor girl..

see - I'm just an old crab, I guess. I think Michelle should have been a gracious champion and bowed out when she didn't actually qualify for the team. Beautiful skater, but most athletes prefer to end on a high note.

I personally am hot for the guy called The Exception...yum yum! And isn't he from Texas? ;-)

WOW!!! Thanks for clearing that up. . . For a moment, I thought Carrot Top had won a medal. . . I was going to walk out in front of a PeterBuilt on the freeway to get that image out of my head. . .

Al Lewis was a quite a character. . . He ran for mayor in a small town in upper MI some time back. It was his vacation home and he just wanted to stir up some shit. . . He did manage to do that. . .

I do feel bad for Michelle Kwan, but I'm happy she did the right thing and backed out. That's a class act. . .

Just like a certain West "BY GOD" Texas resident I know. . .

WOW!! I love that bit about Grandpa!! But I AM SO BUMMED ABOUT ANNIE!!! I hope she gets a lot of money and maybe some backing for four years from now!!! How awesome is she even if she didn't make it??? Thanks for keeping me up on all the news!!