We had our Trade days this past Saturday, just in time for crappy weather and the rapture. It was hot and humid and thunderstorms all around us(we didn't get them till last night)so we didn't have as big of a crowd as expected. But then I didn't get there till later in the afternoon so I may have missed the morning rush. I think they thought there would be more booths and gardeners selling veggies from their garden, but the weather has been so crappy I don't think anyone's garden is doing for crap. Because they still haven't done any landscaping at the apts. the only thing I have going is some lettuce, basil and flowers..Dexter keeps eating the tops off of my lettuce the little shithead and the bugs are getting the rest. 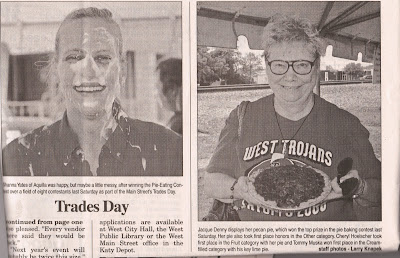 I can't believe I let them take my picture looking like that. I had been wearing my straw hat and I was already sweating and then my head was soaking wet..and no make up..(like that makes a difference) so I really do look like hammered shit here. But I am grinning from ear to ear over my big pie win..
Saturday is the West High School seniors graduation ceremony. We will have 94 graduating this year. They used to have the ceremony here in West and then it got so big they had them outside and everyone complained about not having enough seats, blah blah and so now they have it at Ferrell Center on the Baylor University Campus in Waco.
The burn ban is back in effect..which sucks..I hope the rain we got last night helped but really wasn't enough. Rains to the East West South and North of us...They finally parted enough for us to get some(I left the windows down on the truck is why)hard rain.
Buddy Poppies will be sold in West by the VFW 4819 and its Ladies Auxiliary for Memorial Day. This is the only fundraiser that the Post does so I always try and give as much as I can. They are also having a fried chicken dinner following the Memorial Day Service at St. Mary's Cemetery. All veterans and their families are invited and are asked to bring either a casserole, salad or a dessert.
West KC Picnic is planned for June 5. It will be a West Czech-style dinner. Which I'm assuming what ever they will be serving there will be sausage involved.(arrrrgh the Mavs just went ahead with a minute something left..ahhaahahahah)
They are having a benefit for Vicki Vochoska on June 12. She is battling breast cancer and the money raised will be to help her with her medical expenses. They'll make BBQ plates with all the trimmings for $8.
A sad time for West. The historic Nemecek Brothers Meat Market has closed..Been open since 1896. Nothing was ever the same once the oldies started dying off and leaving the younguns in charge. I'm sure there was more to it..but it just wasn't the same.
HOT DAMN..THE MAVS JUST WON IT...WE'RE GOING TO THE BIGS............
Lindsey Boyd married Kevin Glomb on January 22,2011 and Kerri Niemeyer married Jacob Coan on April 9, 2011. Both were beautiful brides.
We are welcoming home SPC. Stephen Watkins after a year tour in Afghanistan. While serving there he received his rank of Specialist and his Combat Infantry Badge, and has been put up for two Purple Hearts.
There is also a In Memory of, for SPC. Jeffery Shaffer who was KIA 9-13-2006 In Ramadi, Iraq.
Some come home hero's alive some come home in a box. I hate these wars.
The Lander Family Reunion will be held on Sunday May 29 at Cottonwood Hall.
Benjamin R. Soukup passed away at age of 86 on May 23 and Jessie Ruth Davis, age 95 passed
away on May 21.
The Lady Trojans will be playing against Burkburnett this Thursday in Regional Softball Finals.
They will be held at the Byron Nelson High School in Trophy Club. Yes, that's the name of the town. I would go (it's outside of Fort Worth) but they have a dress code and I don't have a beaded t-shirt.
West Fair and Rode Association President Dwayne Upmor gave Shirley Wills of the Heart of Texas Therapeutic Riding Center a check for $3,000. This was a portion of the proceeds from the rodeo association's Bullfest in West on April 30.
The city of West is having a City Wide Yard Sale on June 25-26 Booth spaces $20-$50. I might rent one and see if I can't sell some of these books so I can buy some more when the library has their book sale..ha.
Wow..this Saturday the winds were so high that they split a 250 year old pecan tree in half and up rooted it. It was approximately 120 feet tall and measured 24 feet in circumference around the base. damn.
Another reason why you should move to West, by Goddess, Texas: 3/BR2/BA manuf. home on 3.07 acres. New flooring, recently painted, and creek on the property. $69,000.
Here's a great house for sale by owner. $ bedroom, 3 bath with 3,700 sq. ft.for $159,000.
Come on down, 2 business's for sale..Village Bakery and Nemecek's Meat Market. Start your life all over again ..just set your watch back 50 years, cause we're dancing in the 50's here.

You just look like you've been busy in the kitchen baking award winning pies.
I don't dance unless I'm really drunk which I don't think will happen soon.

I just read an article that said there is a 3 year backlog on forclosed houses, and they are about 35% cheaper. Very bad for the economy.
http://money.cnn.com/2011/05/26/real_estate/foreclosure_sales_report/?section=money_latest

Congrats on making the paper with your prize-winning pie! And don't worry, you look fine -- your big grin lights up the photo!

I can see your header photo now so all is right with the world.

Oh, I forgot to say: my cat, Her Royal Highness, tagged Dexter with the Meow Meow Meme at my blog today.

You look great! A great cook a trifle warm from the kitchen...

It's sad about the historic Nemecek Brothers Meat Market... but sometimes the kids don't want continue with the family business. It happened with mine. I felt and will continue to feel guilty about it - but it wasn't something I wanted to do. The family business was in the family since 1841. My dad still runs the last remnants of it.

OMG I think we're going to have to buy property there. Those prices are awesome! Although, we may need a caretaker. Know anyone?

Congrats on making the paper!

I can shake a leg, but I can't dance. I am still recouping from all the pie making.with some chocolate chip cookies thrown in too.
Mavs are the Mavericks Basketball team who just beat the Oklahoma Thunder to play in the playoffs..hot dang.
need to come check it out Rox..it's hot here, but every where you go there's a/c.
have to come check it out debrah.

Sound like your little place in Texas been the happening place.

It makes me sad that people have to die so young because of war. Mostly the main reason I can see the United States get involved simple is corp greed.

It is sad when the old folks pass on. So many things change.