Not a bunch of news this week..But still enough so that you can keep up with what's going on in West. Kiwanis had a blood drive today. West Senior Center has the monthly birthday party today also. They have their meal and then ice cream and cake.
Be still my heart..Bold Springs Baptist Church is having 2 fund raisers. A fried fish and shrimp meal for tomorrow and 'HAMBURGERS' on Monday. Oh man. If I wasn't on the strict 'don't eat anything that you like, cause it's not good for you' diet I'd have me one of those delicious burgers.Sigh*
The Farmers Market will be held every other Saturday and this coming Saturday is the next one.Hope they have more stuff than what they did last time. They had one guy selling squash out of the back of his truck. I was hoping to get some farm fresh eggs and some fresh veggies and maybe some peaches and blue berries..nope.
VFW Post is having a pancake breakfast this Sunday. They are selling pancake breakfasts for $5 a plate with eggs, sausage, bacon, coffee, juice and milk. The money raised will help bring the American Veterans Traveling
Wall to West. The over all cost is $10,000 and they have raised $4,000 so far.
"Squeeze-Off" is set for this Saturday from 9 a.m. to 5 p.m. at the West VFW Hall. the scheduled activities include an open mike session throughout the day with no admission charged for those wanting to attend. A swap and shop for accordions and electronics is also planned. There will be free food and drinks.
Senior Friends group schedules June 21 benefit for Aquila infant. The money will go to Key'lee who has been diagnosed with hypo-plastic left heart syndrome and had heart surgery at the age of 5 days. She also had a second surgery recently and will need further surgeries. The Senior Friends will be selling BBQ brisket plates at $7.00 a plate. Cake will be sold by the slice and by the cake. I have volunteered to deliver them to who ever wants to buy them and Anissa is going to take orders for me up at Czech Stop.
Well, it's that time of the year again. Third Annual Czech-Splosion fireworks extravaganza will be held on July 3 next to th
e Czech Inn.
They are joining in with the West Main Street. The first year we had 3,000 and last year we had 4,000. It was so cool. Anissa and I had a great time. There is a fireworks ban but since we're not within that district, it won't apply to us.
The fireworks will be the high light of the night, but they also will be selling popcorn and sodie pop beginning at 7:45 p.m. with the fireworks starting about 8:45. There is no charge to watch the show and its just one of the ways for the city to say thank you to the fine citizens of West.
West Library is having their summer reading events again this year on Wed. Anyone living in West that has small kids(and large) should bring them to the Library on Wed from 10:30 to 11:30 a.m. It includes crafts and snacks and is free to area children. The last one they had was about science and the Tale Tellers put on a terrific show. The librarian was telling me all about it and she was so impressed and tickled at how great it turned out. The Tale Tellers have 12 new recruits and Nancy said they are really doing a terrific job.
The teens discussed such topics as voice projection, enunciation, book selection, presentation, organization and crafts. They also have puppet making and Marissa really likes that. She does a lot of the art work and does a wonderful job. Of course I'm not biased. They brainstormed and some of the topic themes are Fiesta Fiasco, The Mad Scientist (this past Wed.)Friendship Day, and many more. I'l
l keep you updated on them as they are so wonderful I want to make sure everyone knows about them.
On June 22, 2011..The Point West Bank(my bank) and West will be celebrating Raymond L. Nemecek's 100 birthday. He's been on the board of directors for Point West Bank and Trust for many many years. He is about as good a man as you'd ever want to meet. So happy birthday Mr. Nemecek and here's to 100 more.
And just so you don't think that baseball and softball is a Johnny come lately to West. 50 years ago 150 West boys were playing ball. So it's been a big deal in West for a long time.
Which explains why 12 West Trojans were named to all district teams and Garrett Mattlage was chosen in MLB's Amateur draft. He was the District 8-AAA's Most Valuable Offensive Player with a .472 batting average. The switch-hitter slugged in 11 home runs and collected 58 hits. He also had 13 doubles and 2 triples while knocking in 53 runs. He stole 12 bases during the season.
In addition he finished the season with an 8-1 pitching record which included a 2.13 earned run average.
He was chosen in the 39th
round of Major League Baseball's amateur draft by the Kansas City Royals. Maybe we'll have another West kid play for and win the World Series.
You too can live here and root for the West Trojans and Lady Trojans...and live in a 2-bedroom ?bath home, open living room and kitchen with vaulted ceilings, updated, central A/C and heat. great neighborhood, large lot with nice back yard. Extra large garage for $84,900.
cheap at half the price.
http://wwwwendolbloggercom.blogspot.com/
I almost forgot..one of my blogger buddies William came up to West from visiting his daughter in Houston(he's from Colorado Springs, Co.) and got to experience Pizza House of West's fine lunch (Cactus Burger) and a skunk 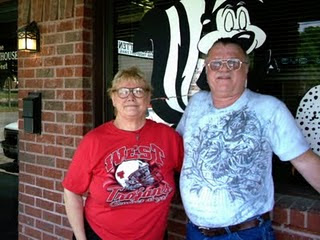 egg. Babs and I took him next door to the Smoke House and the Bakery and then I drove him all over town so he could see it up close and personal. Even took him to Community Grocery (he met Patsy Patsy Patsy) so he could see our little meat market in back. He's written 2 great posts already about it, and if you'd like to check it out..that's his blog address. It was really neat to show him all the places he'd read about and experience it first hand.
Well, that's all the news fit to print. Have a great Friday tomorrow and an even better weekend..It's been 100-102 every fucking day. 'nuff to piss off the pope.
Posted by yellowdoggranny at 6/16/2011 10:01:00 PM

That squash from the back of a truck should have fit very well in your don't eat anything that tastes good diet.

You truly are West's greatest ambassador! I'm sure William had a blast with you crazy girls. I'll be sure to go and read his posts.

You made me laugh out loud with your "Don't eat anything you like" diet. You should try the "See Food" diet instead.
I could go for some of them fish and burgers too.

I lived in Dallas once for about a year. Nice enough but I really wanted to get back North (curiously, a preference shared for me by some of the native Texans with whom I worked).

But reading your list of events -- it almost makes me want to go back.

If it weren't for the damn heat, West, Texas might be a perfect place for me to live! Maybe when I'm through the 'pause.

What Jan and Nitwit said!

Mr. Blue, West,by Goddess, Texas is not like the rest of Texas..especially Dallas..when you come to West, I advise everyone to set their watches back 50 years.