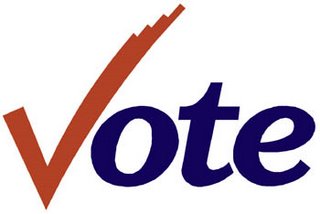 I'm ready. Tomorrow I will vote!

I vote that I should be allowed to have a cone.

I always vote by absentee ballot, but it somehow feels a little empty, not like actually showing up at the polls. I used to take my ballot into the polls on election day but I heard that they didn't count those last minute ones unless the election was close.

Vote -- damn right! Now more than ever (to steal a phrase from Nixon's re-election campaign). Republicans are pulling out all the stops, trying to derail Democratic voters. We all need to vote.

But I'll have to get up and put pants on and go outside where the sun is and then go to the polls and talk to people, and then actually make choices of candidates and decide issues. It's awful hard and all I get is a little sticker...
Oh, and maybe a better future.
It can't get much worse. :)

I think the American public has had enough of Gump and his cronies. People still remember the way things were while Clinton was in office. Even the people I know who normally vote Republican have had enough.

RYC: The guy is white trash.

let me guess...you americans are havin' an election?!? hope you all get out and vote, then you can have something to bitch about...

Vote? Oh Yeah, today is what all the mud slinging was about.

I vote in every election that I am able to. Only once did I spoil my ballot, but I did show up .. ;)

Hoping for a clean House in the morning. (A clean Senate too would be nice.)

babs:good girl!
apos:good girl, here's your cone.
jan:good girl! finally someone who knows about the absentee ballot..man, all it takes is one phone call to get the info on how to do it if you have just moved or living in another state from where your registered..
tom:i freaked out when i went to vote..they had machines..arghh..I bitched the whole time..
nitwit;exactly...i got up drove less than 2 miles, bitched like a sonsabitch and took my i voted sticker and left...felt like an american..
lauren: wish i could convience the dumb rednecks in texas to get rid of perry...but in bush's 'home state'(pisses me off when they say that) they weren't going to let it go to a dem..fuck!
ol'lady:yupper.
nancy:yupper...that noise you heard was the beginning of the revolution..
sue:good girl..here's your cone.
josh:oh man..i sure do hope so..

Virginia is such a Repub state...good grief lol

It was disgusting, YG: Up here, the CRAPublicans got a lock on many of our local offices, and were running uncontested.
Suppressed voter turnout? How about freaking suppressed candidate turnout!

tina:good girl..here's your cone.
galt: yeah, im stuck with good hair perry..if kinky had quit when bell asked him to and turned his voters over to him and if strayhorn hadnt been a republican shill for bush bell would have won..crapola