THE PRINCE OF DARKNESS

"Look deeply into my eyes and repeat after me....."Dexter is the undisputed champion of this house." 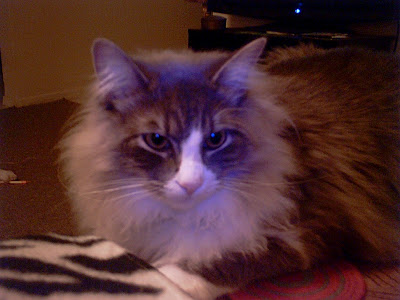 Labels: dexter the prince of darkness

soon he'll be king of the darkness.

Prince of Darkness is a term used in John Milton's poem Paradise Lost, written in the 17th century, referring to Satan, viewed as the embodiment of evil.

It is an English translation of the Latin phrase princeps tenebrarum, which occurs in poem Rhytmus de die mortis by Pietro Damiani in the 11th century.

That cat obviously has more than 9 lives...

At least he has a bell around his neck,to warn you of the presence of evil.

And there must be a "all bow down and worship before me in humble submission" shot around somewhere????

my kind of prince

oh he is soo cute..and devilish!

You are such a fast learner and loyal subject.

I looked into his eyes and lost an hour again. I wonder why the knife rack is empty and the front door open?

Let's hope he never teams up with my Moo! ;o)

When I hear Prince Of Darkness, I always think of Ozzy Osbourne saying to Sharon in season 1 of the Osbournes "Bubbles? Fucking Bubbles? I'm the Prince of Fucking Darkness, Sharon and you want me to have fucking bubbles?!"

I slept very well but also very short last night. What the hell?

Armed with CUTE and not afraid to use it.

he is in hog heaven right now..went to the used shit store and got a big basket tall and deep...he now has a place to hide and plot to take over the apt.
nitty, your going to have to quit looking into his eyes...it's dangerous..he can make me get up in the middle of the night and feed him mackrel...

Man! That forth pic from the top is freaking me out. Looks like he doesn't have a head, or has an invisible head. Probably just my old feeble eyes playing tricks on me.