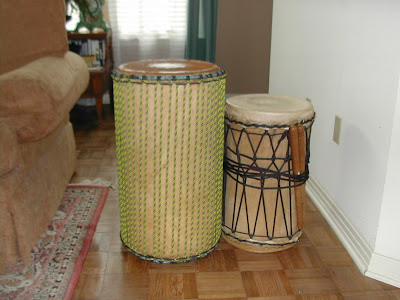 The West Trojans boys and girls won their district..in 7-AAA. The JV softball team Lady Trojans also are district champs. They were6-0-1. The boys and girls were both 8-0. The girls are scheduled to play some warm up games as they wait for their Area Playoff games in May. The Trojan guys have a 23-5 season record.
They have a bye the first game for Bi-District and will start playing May 13-15. I hope they go all the way. Baseball is king in West, and we have a World Series player Scott Posednec to prove it.

The best news of all is about the Tale Tellers of The West Public Library. You ready for this? They won state-wide recognition when they were honored as the Wayne Williams Library Project of the Year Award, which was presented to them at the Texas Library Association's 97th Annual Conference on April 15 in San Antonio. (Nancy had told me before the girls new and it took every thing I had to keep it to myself)Besides a plaque, the Library was presented $500 to continue the project. See, they had a grant to get it started and run it for a year. Well, when the year was up, the girls went to Nancy and said it was too important and they didn't want to quit ..money or no money. So they did it all on their own, having cake sales, sold confetti eggs at Westfest and did absolutely every thing on their own. The city of West gives them a little but not near enough to cover the cost of the costumes, props, snacks for the kids, etc. 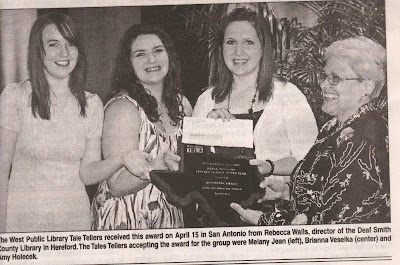 This past Saturday someone donated a bunch of huge pots and the girls helped kids plant roses and bushes in the pots and served them cotton candy. I was going to do the cotton candy, but one of the Tale Tellers wanted to and it's their gig, so I let her do it..I think I was back-up if no one knew how to do it. That was for Earth Day. They do something almost every Saturday. I am going to see if I can do the cookies/cupcakes etc. for the snacks when they have it. It can be costly, but hell I bake for everyone any how. But if anyone would like to donate to the Tale Tellers fund of West, By Goddess, Texas..put it in the Annie's donation pay pal and I'll give it to Nancy. When they won the State award, you have to know that they were up against cities like Dallas, Austin, Houston, etc. Many many libraries...and we beat them all. It's really a big deal and I'm so happy and proud of them and grateful for Nancy who got the ball started. The $500 they won didn't go far as Nancy drove them down from West to San Antonio and back plus paid for the 2 rooms. So most of the $500 went for travel expenses. Nancy is a retired school teacher and her wages from Library isn't that much and she can't be expected to foot the bill. The library doesn't have enough money to pay for stuff like that. Our money goes for books, supplies, and Nancy's money. So any help would be greatly appreciated.
West also got a new fire truck for the West volunteers. Estimated cost is $70,000 and will be used mainly to fight grass fires. The city paid for it with money accumulated from fund raisers and donations with the cook off being one of the major fundraisers. I want you to know..for a town this size, we have the best volunteer fire station and fire trucks around..
More good news..Merle took off yesterday to go to Florida to visit his sister. Think it will be good for him, to get away from the house for awhile..Merle loves to travel and T.J. had been sick for a long time and wasn't able to travel, so this is great for Merle. They had a fish fry last Saturday, but I'd had all the fun I could handle for a while.
We had a kick ass storm and at the end of my unit wind broke a huge tree off and fell against the end of apartment. Plus the shingles and wood frame under the roof was ripped up from the wind. Winds were up to 60 miles an hour. Ripped up signs, trees, roofs, etc. Plus beat the crap out of our blue bonnets...but they bounced right back.
I think I have my camera ready to take pictures..still haven't figured out the video camera. But before I do anything..I'm reading the destruction's.
I made home made pizzas tonight..one for me with fresh mushrooms, onions, black olives pepperoni and a ton of cheese. Babs just had cheese and pepperoni..We both agreed..they rocked. Have to go get all the stuf ready for the cooking class tomorrow...Making home made granola and serve it with vanilla non-fat yougurt..I'll let you know how it goes.
Posted by yellowdoggranny at 4/27/2010 02:15:00 PM

I pretend I live in West, Texas. So much more interesting than where I live.

Wow, it's been an eventful month in West, by Goddess, Texas! And what wonderful news about the Tale Tellers -- good for them! It's great to see a group of teens creating such positive experiences!

tex:they were really good..it took less than 20 minutes to make the dough..dont know why people dont make it more often..drop by and say hi to babs..she actually posted today..
jan:you can come retire here..it's cheap to live and the food is wonderful.
debrah:im so proud of the tale tellers...they are so dedicated to what they do and the kids they help.

read the destructions on that camera..then figure it out the hard way when they dont make sense...the pizza sounds so yummy

I need a set of those drums...

I think you ought to be one of the Tale Tellers. You have the gift of gab.

Maybe you can get Shady Lane to do an African Drum-Off for a fundraiser? I don't mean sell the drum - I mean get everyone in West dancing on the hardware store webcam.