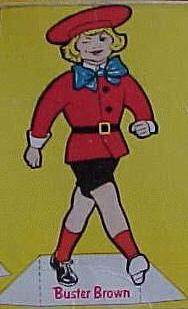 Ok, I am going through my second childhood, or to hear some people tell it...never left the first one...
I googled plunk your magic twanger frogee last night and my childhood just came back in a flood...Andy's Gang with Midnight the cat, Squeeky the Mouse, F

rogy, Gunga the East Indian boy his pal Rama and all the other great stuff that went with along with my kiddy years...When Andy would be reading the stories and Frogy would mess them up and Frogy would call him a 'big square'...or when he was messing people up and he would say 'ah, ah, ah .I would I would. It was advertized by Buster Brown(Hi, I'm Buster Brown, I live in a shoe, this is my dog Tige he lives there too.)and Kellogg's Sugar Pops.....Sugar Pops are Tops...Frogy lived in a big grandfather clock and when Andy wanted him to come out he would say in that great gravely voice(Andy Devine played Jingles on The Wild Bill Hickock Show...."Hey, Wild Bill, wait for me.") and say "Plunk your magic twanger Frogeeeee.".....oh man..it was terrific...the cat and the mouse were real and I'm sure if they tried to do that show on tv today, the humane society would be all over their asses...'Cause what they put that cat through...holy shit...Of course we thought he was doing it on his own, he was magic after all..I waited each day like a crackhead waiting for his dealer.....waiting for the magic words in that great voice.."Hiya kids, HiYa Hiya.."....Maaaaaaaaaaaaaaaa, where's my sugar pops..? and can I have a pair of shoes with Buster Brown and Tige in them?....Maaaaaaaaaaaaaaaaaaaaaaa.".........."Jackisue, shut the fuck up.".."Aaaaaaaaaaaaaaaaaaaaaaahhhhhhhhhhhhhhhh Ma."
Almost as good was the radio shows...like 'The B-Bar-B Riders", Big John and Sparky. I went to some store when they were doing special appearances and was freaked out when I saw Sparky was a dummy...thought he was a real kid.Then there was Sky King, The Shadow, Intersanctum, The Lone Ranger, Gunsmoke and oh so many more....I remember when I was living in Hawaii and was listening to some scary story about "The Hand", where some guy loses his hand in an accident and the hand comes back to haunt him and they are telling how the hand is creeping up the couch,up the back,over the side...up closer and closer to the guy, closer and closer and about that time my parakeet Pete flys and lands on my shoulder and I screamed so loud the neighbors called the AP's(air force police)...scared the fuck out of me...Daddy wouldn't let me listen to anything but baseball games for a week...Said my imagination was to vivid...no duh...I also remember pretending to be a horse..ran around the house and yard, snorting, pawing the air with my hands, flaring my nostrils, and whinning like a wild stallion...I WAS the Black Stallion...stranded on a desert Island ....swimming in the ocean..Daddy would call me in for dinner by telling me 'oats are on'....man, I used to have so much fun before TV ....Climb trees and pretend to be Lana the Jungle girl...I never had to be saved by anyone, I was always saving someones life from Tigers, Lions and would ride off into the jungle on the back of my trusted friend "Timbo" the elephant..(for all you novices who never played jungle, or read Tarzan books...Timbo is the Bantu word for elephant..My other jungle friend was Kimo the Monkey(Kimo means monkey)...Oh man, to have a great climbing tree in my yard right now...would haul my fat ass up there and pretend to be saving lives from the evil tribe of canibals..oops....gotta run...someone is caught in quicksand and I have to go save him...oh, my..he looks just like Antonio Banderas...."hang on Antonio....I will come save you."..

"Plunk your magic twanger frogee"?
Damn.
I really missed out on some neat shit not growing up in the States!

That's a little too far back for me, but I did know that Andy's Gang was the origin of Froggie. . . That whole bit was later used in the early 70 by "The Ghoul" a late night movie host (worst sci-fi movies of all time) out of Cleveland (Mr. B.Y. Gun will back me up on that fact). Ron Swede played The Ghoul. . . He used to put Froggie through the worst abuse. We were all high and thought it was great fun. I always figured that's where SNL got the idea for "Mr. Bill."

I also remember the TV series "Sky King" in the early 60s. I didn't realize it was originally a radio show. "Penny" was always getting into some mess or the plane was konking out at the worst moment. . . Great stuff!!

I don't remember any of this except for the Buster Brown shoes, of course.

I do,however, remember actually being able to play outside without fear of kidnapping....

I only go as far back as Gilligan and the other castaways. I always thought "Plunk Your Magic Twanger" was a Frank Zappa reference.

okay I really want no demand to have what you're on.

the Lone Ranger and Gunsmoke [besides Tarzan] were the only two I know of that lot.

Ahhh...I remember the Lone Ranger...the TV show, anyway. Other than that, I'm with Teddy Pig, I grew up on Gilligans Island and Dark Shadows.

*laughs* We lived in base housing in row houses where the bathrooms backed to each other and only a thin sheet of tin in the medicine cabinet seperated you from your neighbor's bathroom. The kids next door were playing in the tub, and my mom tapped opened the medicine cabinet and tapped on the tin and said "Ohhhhh...this is Baaarnaaabaaas". *laughs* Tanya and Tony went screaming naked for their mother. Man...that was a long time ago...Tanya and I were both 6. And now Tanya has one kid in his 3rd year of college and another one about to start.

Please let me help you save Antonio...he's a keeper.

Who was that masked man?
I remember that! I didn't get to listen to the great old radio shows until much later. There used to be a radio station somewhere near DC that played all kinds of old radio shows. I used to listin to the mystery and scary shows.
It was about 198 before I ever saw the Lone Ranger and Sky king without snow.
Tarzan was great too. I spent a lot of time learning from the Three Stooges. Shemp was king!
Let the quicksand have him, it will just spit him out. :)

the day "bill nye the science guy" isn't my favorite show, is the day i give up.

Wow! Is that Andy Devine, or Jingles, sitting with that story book? I too remember Buster Brown.

Funny... I was standing by a pond yesterday listening to the frogs and said the magic twanger line... and now here you are.

It's so nice to stumble upon a peer blog for a change. See you again soon.

I remember all those radio shows and I read all the tarzan books and all the Wizard of Oz books. Those were the days.

I always wore Buster Brown shoes. I remember one pair that had ankle straps and brown big rounded toes with holes in them for air. I was so cool.

OMG Big John and Sparky. Every Saturday morning I would jump out of bed, eat my cereal and then run into the living room and sit by the big radio. My sister would turn the show on and sit down and listen to it with me. I loved that show.

Sky King, The Shadow, Intersanctum, The Lone Ranger were all favorites. I loved Roy Rogers and Trigger. I used to make my little cousin think Roy and Trigger lived in my basement and only I could talk to them through the registers. No kidding. She believed me. She still talks about that to this day.

I remember getting good a supply of soda crackers and mayo and sitting down by the radio to listen in on a vivid world of fantasy. The Theater of the Mind. And it was in black and white! The amazing stuff a young mind can supply...

I still listen to radio at night when I can't sleep. Amazing what an OLD mind can come up with. It's not pleasant fiction...

I sometimes say that I don't want to reincarnate here again but SOME of it was nice! 1950's Radio was ok.