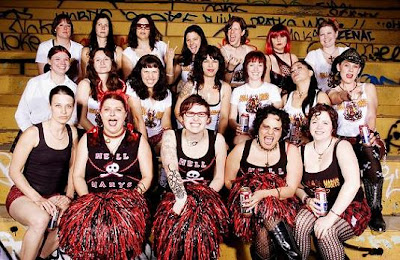 walls/sides and we were front row by the first curve and ended up with skaters sliding into us on more then one occasion...we were right by the Hell Mary's cheerleaders and they were so funny...in the picture of the Hell Mary's you can see

the cheerleaders on the bottom row..the one that is second from the left had patches of the band Kiss sewn on the back of her red/black pleated thigh high skirt..I said to her,'that's cute'...she said, 'that's so they can KISS my ass.'....One of the skaters for the Hell Mary's is Czech and knew all about West..It was a blast..they had two bouts of skaters..Honky Tonk Heartbreakers and Hustlers played one half and then Those Peabody's played(local band) and then Hell Mary's and Hot Rod Honeys played their half...then they had drawings and introduced skaters that were on the all star team...then the Honky Tonk Heartbreakers and Hustlers finished their game and then they announced that all the beer was gone...and then Hell Mary's and Hod Rod Honeys finished their game...I had so much fun...I wore my West t-shirt and my Lime green Baby Phats...superstaaaaar...I bought 2 Hell Mary's t-shirts for the girls and wish now I had bought one for me too..doh!..but can still get them on line..check it on on txrollergirls.com..They had a little program with pictures of all the teams and individual pictures and little quotes from the players..The line up for the Hell Mary's is Apocalippz,Bea Attitude, Bloody Mary,Buckshot Betsy,Bunny Rabid, Derringer, Lady X,Muffin Tumble,Nasty Habit, Ryder Down,Smaximaz, Sparkle Plenty, Tomax,2Face and Q...Hot Rod Honeys have Tinkerbell, Rebellika, Cherry Crush, Miso Fresh,Vicisous Van GoGo,Radioactive, Shank, Texas Penny,Rollin Sweet,Vendetta Vondutch,Dagger Deb,Pixie, Morphine,Lucille Brawl,Melicious and Rice Rocket.
Shady's and my favorite names were..Pussy Velour,Dinahmite,Damn Skippy,Reyna Terror,Choctawesome,Muzl Velosity and
Mary Lou Threaten...
You should check out the website and
see if your state has a team...
there are teams from Arizona, California,Georgia,Louisiana,
Massachusetts,Wisconsin,North Carolina,
Maryland, Connecticut,Michigan,Alabama,
Virginia,Indiana,New York,Missouri,
Minnesota,Nebraska,Arkansas,Ohio,
Pennsylvania,Colorado,Rhode Island,
Washington,Oregon,Nevada,and Illinois.
go out and support your local roller derby
girls...The Championship tickets were $15,
so I don't imagine that the regular
tickets for regular games would be all that
much..I know that I haven't seen so many
gays, lesbians,and transgender people since I
left San Francisco..There were two of the
cutest little boys about 4-6 years old, with
blond hair and bright rosy pink Mohawks.While
we were

outside waiting to get in some kid came up and had these little arm bands, so we thought he was selling tickets...nope..he was checking id's and if you didn't show him your id, you couldn't get the band and couldn't buy beer.When he came to us and asked for Lane's id, she just showed it and said nothing..he came to me and I said..."I'm 63 fucking years old."...he said, you still have to show your id..I said, "I'm 63 fucking years old...and I don't drink...".
still had to show my id...Judas Priest..
anyhow..it was a lot of fun..and if they come
to an roller rink close to you..you must go
see them..it's a blast..
HELL MARY'S..HELL YES..HELL MARY'S..HELL YES!!!!

You always have the bestest times, can I come and play with you?

Believe it or not I've seen womans roller derby and I also love it. Hilarious and just a tad bit sexy.

Thanks for your kind comment at my blog, glad I did not offend I tend to push the envelope a bit.

You should have gotten about 50 tee shirts, $$$, yep. Sounds like it was a blast!

Um, okay, not very spiritual, but as long as you had fun.

It all seems like monkeys monkeying around to me. Did they do any war protesting? Just asking. :-)

Glad you quit typin about the spankin...All that text about hot girl-on-girl action and I was sporting Major Wood & I don't mean Tiger!
Speaking of ass-whuppin's, CONGRATS on the pre-season Dallas Cowboy beating of Indianapolis Colts 23-10.
Hope DC get back to where they belong this year: The Super Bowl!

How come the Cheerleaders got spanked when the players lost the game?
I guess maybe they wanted to be spanked so they could go out and be bad. Wait a minute I always get that backwards.
Nice to know they are strict about the drinking age there.
Ohio has a women’s roller derby team?
I'll have to check that out.
Who knew we had such a culturally uplifting activity going on in the state that voted to lose all their good jobs in 2004.

I started getting hot so I turned the fan off. You is in trouble with the blonde brain trust.

Roller derby is a harsh mistress.

hahah that is too funny :) I looked it up and ours are the Dominion Derby Girls lol

Your second picture looks like a female version of Da Vinci's Last Supper. Maybe there's a message (or secret code) there?

junebugg;you have a standing invitation to come play anytime you want to..westfest is the end of the month..come on down...
nick:nah..Im hard to piss off..only christians and republicans have a shot at that..your just an asshole..like me...and i like assholes...so your more then welcome to visit anytime..
tex:you can go to the website and order any tshirt you want..i just happened to like the hell mary's...has a picture of the virgin mary with cape, bowed head and skates draped across her hands..pretty funny...
BBC:it was a skating championship..why the fuck would there be war protestors???? jeez!
galt:shoulda known you would get a woody reading about girl on girl spanking...(you republican you!)..ha
yuppper..the boys looked really really good ....i like that romo kid alot..
nitwit:im not sure..but now that i think about it..every time someone made a point on either team..they ran and spanked the ones that didn't score...i think they just liked sticking their butts out there and getting spanked...and think if someone blew the whistle wrong they would want to get spanked...i could use a spanking right now...you in the mood for some hanky spanky?...your team is called ohio rollergirls from columbus ohio..i liked the no coast roller girls from lincoln nebraska..
allan:they are just into spanking and from the looks at some of them(tatoos, piercings etc.) they were into a hell of a lot more ..
tina:go out and support your girls..it's so much fun...
dx:yupper...the code is...we don't need no men..well some of them do as 2 were out because of either expecting or had just had a baby...welcome to my little home away from home...

Does ESPN know about this? Why do you always have the best entertainment there and not share it with the rest of the world?

this sport sounds like a complete blast! i don't think it exists in south africa- i would so go and watch if it did! i love their website!

HOly God! I wish I could have been there with you! Good times, I tell ya!

I'm gonna consult my NEXT year's calendar for work and pencil in West Fest. Whether or not HG gets the time off, Buddha and I will be toddling down to Texas. Tell your asshat cat that Buddha's coming to town!

Oh man, that sounds like a blast. Love, LOVE the names the players used. And I could totally see the LGBT connection. Some of those names sound as though they could also be drag queen stage names.

That sounds like a lot of fun! I need to put a Kiss patch on my butt too.