The pictures are of the bar and the big ole fat Texas clouds..I love clouds..and the couple on top is Vincent the best mechanic in West, Texas and his girlfriend. I have no clue who the couple below Vincent is, they were with Bimbo and wanted their picture taken..so I did.. 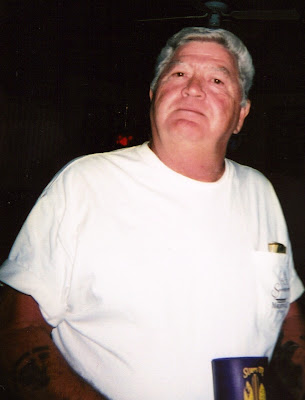 The guy in the white tshirt is Dennis Porter, who looks exactly like he did 20 years ago, except his hair is gray. He's funnier than shit and takes no shit off of me. One of the reason's I like him...while we were sitting at the table his wife Cheryl dropped something and bent over to pick it up and she was right by him, he looked down and said "I know you can't get enough of me Cheryl, but damn do you have to do that now."...She still giggles at him..

the picture on the left is a painting by Bobby a local artist. The sign above the bar says Strickly Country.
The 3 cowboys and the lady are Josie and the boys, the band that played. Don't let the fact that Josie and 2 of the boys are over 70 fool you, they are really a good little band..Do a lot of Waylon Jennings and can't there's nothing wrong with that.. The other picture is the dance floor and where the band plays. Don't know if you can tell but it's pretty good size. Plus they have a beer garden in the back, but like T.J. says, 'It's just too fucking hot to sit out side.'
The 2 old broads are Patsy and me hugging..Then me and Merle and T.J. and Patsy again, plus Patsy giving me the finger. 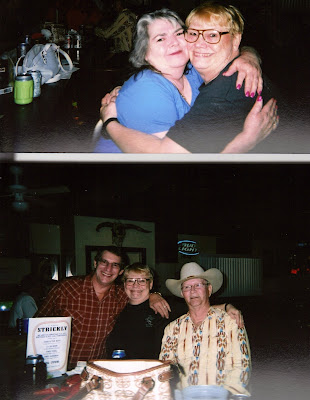 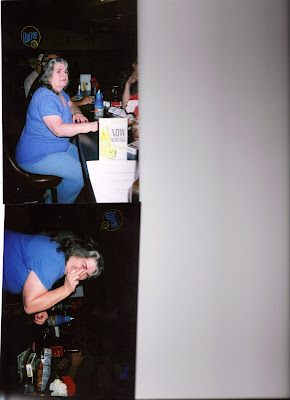 The guy on the left is the notorious Bimbo Hand. The girl is his girlfriend Jamie. That's Merle and Bimbo on the left with a table full of drunks. Then Merle and his maraca's...after I left he played with his maraca's...when they told me that I asked if that was a nick name for something besides a musical instrument..

The only 2 gay bar owners in town. The sweetest 2 people I know and so glad they are my friends. Merle and T.J. who turned 65 on the 4th of July.
Merle giving a big wet one to Bimbo. 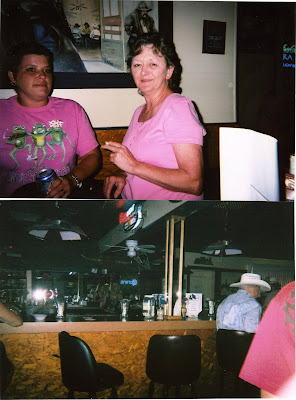 Cheryl and her daughter in law. 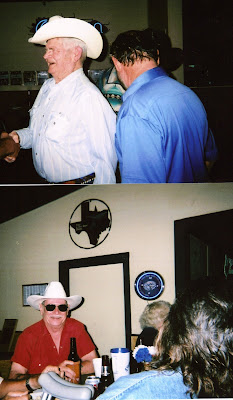 The guy in the white hat is Chainsaw, the old fart that can't see past the brim of his hat and feels my tits and says'Yeah, that's Jackie.'
The picture up above is the bar and the guy in the red shirt and white hat is James Favors, or as I still call him...Chief. He used to be the Chief of Police here for over 20 years, and was Chief of the Police and owned the original Strickly Country which is now Jack and Dianes. His wife died about a year ago and he's dating a new widder lady and his 3 daughters are about to have a stroke. They can't stand her and want me to help get her out of the picture...Not sure what I'm supposed to do, but they are sure I can think of something. I have more pictures but will post them later..some of Inky and me and the granddaughters, my bookcases and Annie ...will also post about the latest results of the saga of Jackie and Tom...will do it tomorrow..I'm whipped, had to go to House of Satan and that always kicks my ass...so..see ya tomorrow...

funny how people always look happier in a bar than they do in a church.

billy:if they let them drink in chuch they'd look happy too.

Seems like the residents of West are one big (happy?) family. That's cool; even among small towns that's pretty rare. I'm originally from a small town (<6,000 people) and there's definitely *not* that much of a sense of community there. (Part of the reason I don't live there now!)

I can usually size people up pretty quick. I wouldn't want to start any shit with a couple of those boys.
Looks like a good time though.

josh:they all know merle and t.j. are gay, and no one gives a shit..they hire pretty girls to wait on them, serve cold beer and have big party's with lots of good food...what more could they ask for?
bigpissy: same group of drunks drinking together and getting along for the past 40 years..
tex:ahh, they're all good ole boys..well, except for Bimbo and the tattooed guy..and me..

What great pictures! I love when you post pictures!

I forgot to comment yesterday. There I did it.

I love the photos and I always love guys in cowboy hats! Damn. XOXOXOX.

rude girls:i asked eveyone if they minded if i posted they're pictures, a couple wanted to know if there was any money in it and a few wanted to know if it would help them pick up girls...
nit:i knew you would show up sooner or later.
mcraven:i love the pictures too...and yeah, men in hats..gotta love it..with the buckle and the boots and the tight cowboy shirts...sigh*