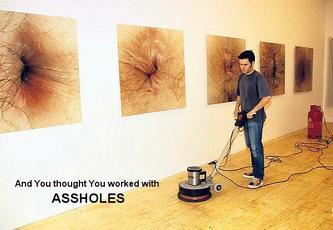 THINK ABOUT HAVING THIS JOB THE NEXT TIME YOU START BITCHING ABOUT YOUR'S...

That was totally nasty.

but at least those are quiet assholes.

The word "assinine" comes to mind.

I reckon that first one doesn't make much noise when it farts.

leave it to apos to come up with the winner..

what a shitty job..

the bravest man in the world..the guy that took those up front and personal pictures...icky poo

Maybe he used a very long telephoto lens...bwahahahaha.
I thought they were bellybuttons at first.
Who on earth is going to buy those to hang on their walls?

Now that takes the title of poorest excuse for art away from that Arches or Gates thing they had in Central Park. Then again it may be a critic's statment on that project.

its a toss up

That reminds me of my last prostate exam, LOL! The doctor said, "Don't worry, I'd rather be doing something else too."

Yep that's nasty. I love watching the show 'Dirty Jobs'. It always makes me feel better than my own.