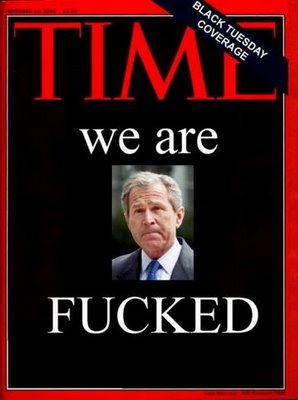 lol..not exactly a news flash is it.

I don't think much of Bush baby. He is running our country into the ground.

Couldn't have said it better myself... haha

Hopefully it'll be the reich wing that gets fucked on Nov. 7.

Personally, if I'm gonna get fucked I want dinner and a kiss first but Dubya is rapeing the country! Shithead, I hope he gets whats comming to him (Hear that Goddess?)

He's such a SMUCK!

sling:nope i think most of us with at least 12 brain cells know it..
gail:yupper, he's making such horrific changes to our countries laws..
keith: what everyone is thinking..
josh:vote..vote...vote...
junebugg: yeah, we get no dinner, no flowers, no candy or even a kiss before we are bent over..
nancy: yes...he...is...
ruby rocks: 8 years..yeah...that's pretty slow alright..

Gump has so completely FUCKED over this country it'll take years to recover.

The man is insane, there is no doubt in my mind. What sane person would continue to force an ill-equipped, poorly trained army into a war where you can't tell the good guys from the bad guys?. . .

lauren: bless you my child...bless you.

yup, right in the ass.

I gotta get a subscription to that magazine. I didn't know there was a problem. Well, I did notice that The Gump hasn't been spending nearly as much time down on the ranch as he has in other years.

Mike: someone sent this to me in an email..and wish i could remember who..so i can thank them...i loved it
dawn marie:yup..seems like that is how most of them republicans like it
nitwit: im glad he spends less time in texas..im hoping he will move his yankee ass back to conn.

I like this one, it is scary but accurate, I think I found a good picture for my October 31 post.

I thought we HAVE BEEN FUCKED, repeatedly, in the ass.

Plea to all Americans who live in the most powerful nation on earth .. please vote wisely as we do not have a voice in your elections, but must all live with the consequences of who is in charge of your country. Sign me Scared In Canada.

Those three words sum it up just about perfectly.

If only the news was that truthful!

I am a cynic Jackie Sue when it comes to these things. If your current government will not listen to it's own people (a good portion of them)why would they give a shite about what a Canadian/s has to say ... I guess my point was that Americans don't just vote anymore for themselves and what is best for the USA only .. you really do vote for all of us... :)