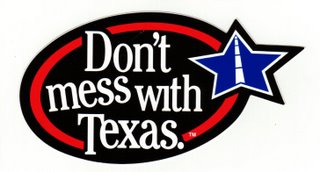 Would like to thank all of you that voted for Don't Mess With Texas in the advertising poll..'cause we won...over 400,000 votes...mostly people that messed with Texas and got their asses canned...like David Crosby and Ozzie Osbourne.This was for the Adv

ertising Week's 2006 Walk of Fame contest.The "Don't Mess With Texas campaign began 20 years ago to combat roadside liter and its pickup cost.. Our slogan beat out 25 other well-known slogans including 'Just Do It'by Nike, the California Milk Processors Board's 'Got Milk'and 'Have It Your Way

'by Burger King.It also beat out Campbell's Soup's 'M'M M'M Good,'Dunkin Donuts 'It's Time To Make The Donut's,'and Wheaties'Breakfast Of Campions.'
To celebrate our big win, "Don't Mess With Texas" victory banners lined New York's Madison Avenue on Friday, and the slogan will receive permanent recognition in the Advertising Icon Museum in Kansas City, Mo., which opens in spring of 2008.
See, you guys...it's not just me you don't wanna mess with...it's the entire state.Something the Tennessee Titan's and the Miami Dolphin's found out today too..at scores of 45-14(Dalla )and 17-15 (Houston)...Ahhhhh life is good...
Ya'll come down and see us..ya'hea?

I do not need a advertisement to tell me not to mess with Texas. I have always known not to piss a Texan off. I thought it was one of those things that was included with common sense. But obviously common sense is seriously lacking in many these days.

I would never dream of littering in Texas.

I never knew the origin of the slogan....now I feel much smarter.

Love that picture of Gollum with the milk mustache. I've never seen it before.

mimi: its the 11th commandment..
11.Thou shalt not piss off thy mighty State Of Texas...

apos: i knew you wouldnt come to texas and have puppy's..
Mike: howdy!
jublue: i googled 'got milk' and a whole bunch of them popped up..i liked that one too...

I know better than to piss off a Texan. . . Momma didn't raise pretty kids, but she didn't raise stupid ones either LOL!!

And the Lions get their asses handed to them yet again today. . . Fucking morons!! If Bill Ford wants to cut his losses, he needs to dump this team on the first person dumb enough to take them (preferably to a different city). . . Detroit is embarassing enough without these losers. . .

Let's see Dallas won, the Gump is still President and people are suprised that a member of Congress likes underage kids.
I wonder it Hell has frozen over yet?

Now I have to find a new state to mess with.

I love that Tshirt!

lauren:nana nana boo boo im like 48 points ahead of you in fanasty nascar..finally..ha..
and like a schmuck i took the lions and the points..lost by 1/1/2 points..fuck..but im 37-18-3 so far...
dawn marie: you and everyone else..carina loves it to..i want to get a couple dozen of them and send them to everyone..ha.want one that says FUCK YOU I'M A DEMOCRAT.
hahahaah
nitwit: i think i feel a slight chill in the air..if it's cool in texas hell freezing over is not far behind..

I enjoyed reading your blog very much. Thanks for taking the time to keep it going.
Shane
World Fitness

Ya think maybe it has to do with the fact the people can carry guns down there legally???

Excellent slogan! What pisses me off is when I see parents littering in front of their kids! In any state or country it's just gross.

The only Texan I know who I wouldn't mind pissing off is Bush, but he isn't really from Texas, right? Do Texans who know they are real Texans really think of Bush as a Texan? Anyway, I always thought the guy was from Maine.

It was also a good day for the TT Red Raiders with a last minute win over the freaking Aggies. Woo Hoo. Gotta luv Texas Football. But what the fuck is with Texas playing Sam Houston State. Talk about a hollow victory.

shane:..is you spam?
junebugg: well that is supposed to be just understood.
ol lady: legally and illegally..plus the kids are crack shots too from hunting all their life.
sue: one of the first things i taught my kids..dont liter...
snave:nope bush is not a texan..he was born in Conn. and was only here as a kid and then went to yali where he was such a dofus, he couldnt play sports so he was a 'fucking cheerleader'..actually we real texans have an expression for people like bush...'all hat and no cattle'..
fuzz:whoo hooo i love ttec..i have been following their quarterback since he was in high school at ennis..baylor won too..so it was a great weekend..

Those ads used to get on my nerves. But then I figured people should know better than to litter. And then Bush won our state, so that tells me people don't know shit.

babs: oh i always loved those ads...dont know why..just liked the idea of all those different texans telling folks not to fuck with us..ha
ahh, we cant hep it if they dumb...
lilfeatheres2000:im biting my tongue here..but will take the high road...thanks for the cheer and the blessing...(we don't need no stinking cheer..) sorry ..im evil..

is there a mexican translation to the slogan?

because those mexicans seem to be messing with texas.

I love the guy's t-shirt! I can't wait to visit!

RUBY ROCKS:que no fuck with texas..????
nancy: i have to have some of them tshirts...

Did it beat it the most famous slogan in Blogville? "Don't mess with Jackie Sue, unless you want to be blue; let me give you a tip, she has the power to big..."

Most people who messed with Texas got their asses canned, LOL! I'm glad I wasn't eating or drinking anything when I read that, LOL!

scottish: great poem..i may use that..
cyberoutlaw:i bet ozzie and david didnt think it was funny..hah