HOW DO I LOVE THEE,? LET ME COUNT THE WAYS 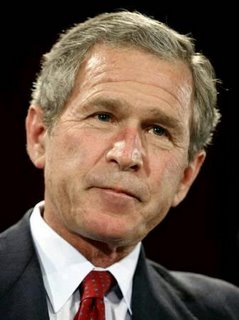 In case you haven't

Don't worry, he knows. He's been listening in for a long time. The Ministry of Truth will be visiting you shortly. Do not try to escape.

I will come see you in the fedral pen. I'll bring you a cake and file.

I just can't belive we have another whole year of this schmuck.

What will we blog about if we get a good president?

819 days left in office?That's too many.

Tom: ya think? Im not running and hiding..let 'em come and get me...I'll have Babs sick her army of cockroaches on them..
nancy: 819 days 9 hours 32 minutes and counting..
sue: i would rather have had a veneral disease for 8 years than this administration..at least I would have had something to show for my fucking..
bbr:im thinking i could be very happy with barak obama as president..
allan:no shit...!!!!

Aren't you afraid that when he is out of office he'll spend all his time in Texas? And then there is the Bush Library to be constructed there.Is the state big enough for gwb and ydg?

jan: i think they will be putting the library at smu and not baylor..thank the goddess....and I have a feeling that once he is out of office(please make that sooner than later) he won't be hanging around texas...he'll be moving back to conn...or maybe to iraq...that would only be fitting...

One night there'll be a knock at your door. The next day, it will be as if you never existed.

I take it you're not exactly crazy about our Dear Leader, Idiot In Chief, and grammatically-challenged poster boy, King George the Last.
Great Presidents are as rare as a raw steak, but this genius made Jimmy Carter a Mt. Rushmore candidate long ago, is probably giving Bill Clinton blow jobs when nobody's looking, and threatening to make LBJ look decent as well.
I don't know 10 things the CRAPublicans could do to take back the Presidency - which they WILL lose in '08 - but at the top of the list would be "Make sure your candidate's last freaking name is NOT 'Bush'!"

byg:Jackie Who?...nah..we never heard of her...
galt:i know that our founding fathers are spinning in their graves...and i would be happy if all the bushies got out of politics....

And I'm back. Pretty much. Thanks for stopping by and for being supportive, it is most appreciative.

BUT AT LEAST THEY BEAT THOSE FUCKING COWBOYS!

Okay, had to get that out. They do suck. By the way, new blog, new design, all that shit. And you're no longer in the "non-politicos" category.

josh: will stop by......
no problem ..any time
Brad:man, I'm glad you commented..somehow i lost your blog...but i see your on word press.so maybe that was it..????
im watching the cowboys get their asses handed to them on a plate by the giants..fucking quarterbacks...
hey...it's your blog ..you can put me anywhere you want.ha

HAHAHA!!..In case "they" aren't watching me,I'm thinkin' about renting an "Impeach Bush" blimp to hover over the Super Bowl.

He may wish for impeachment soon. Everyone in his own party is starting to treat him like Typhoid Mary. Every time he voices his support for someone they suddenly become a target for investigation and lose numbers in the polls. Maybe someone can talk him into going out and stumping for all the Republican candidates to make sure they lose.
I think he'll go hide in Kennebunkport when he is evicted from the White House.
Of course with the power Congress just gave him he could have every opposing candidate jailed indefinitely with no charges and no legal rights.

We have a great commercial here that shows our Republican Gubernatorial candidate morphing into GWB and back again. I'll see if I can post it on my blog. The resemblence is scary. . . In more ways than I can explain here.

Sorry about the Cowboys. Ain't it ironic that the fans wanted Romo, got Romo, and the team gave up three interceptions? I want the Cowboys to win, so I'm rubbing nothing in here.

I would just love to be a fly on the wall if the men in black do pay you a visit Jackiesue - poor bastards wouldn't know their arses from next wednesday after you'd done with them!

NFC East = cult of mediocrity. Two might make the playoffs, both will get trounced in round one.

Romo will get a lot better. His timing was just way off, which makes sense as he hasn't practiced with those guys much. Now Bledsoe had NO excuse for that disgusting pick at the end of the first half.

sling:ill go in half's with you on the blimp...
nitwit: he was on tv talking about how he doesnt send or receive emails(covering your ass before it needs covering)..and that he would use the mapquest and find his ranch and look at it..cause he missed being there so much...i almost threw up.
we would all like to send him back there..full time...
plus i wonder how many soldiers google the map of their home and wish they were there...that fucktard..
revjim:im so pissed at the cowboys i have shortness of breath..we need an offensive line and a fucking qback..arghghghghghghgh!
beany: let 'em come...'they ain't the boss of me'.....

I couldn't agree with you more.

I will be so glad when we are rid of the asshole.

The ad I mentioned above is posted on my blog. Enjoy!!

rhea:most eveyone does.
mimi: dang if you dont get the message, im not doing my job..ha.
lauren:will come check it out..

So sorry about your cowboys.

RYC: Think of the nighmares we'll have in MI if he actually wins. . . My next job will include the phrase. . . "Would you like egg roll with that?"

well I think he is wonderful!!

shut up I'm hoping that will help me migration process.

pirate:hey bud..welcome back...no going to vote for the democrat..kinky's not smart enough to handle the job..
lauren:you get any snow?...hope the dems win..anything has to be better than what we have had..
dawn marie:isnt that great..i forget where i found it..but i love it..
apos:just dont tell them you know me...

He's a spoiled little prick who has gotten his own way all his life. No more, no less. BIG EGO: Bush's own sense of entightlement is his biggest problem; he doesn't want us to have anything, just the super rich. He has no curiousity, he doesn't need to be curious. When you are priviledged and have found God, you don't need to listen to differing opinions.
Worst President ever!!!!

HEY! How did you get that option to delete the entire Shrub Cabal and why didn't you click on the YES button?!

SO where do you stand on the Bush administration , I wasn't sure with all those loving pictures you just posted , God bless him.

You call him stupid, yet he's smarter than you, go figure. He's the POTUS and you're a dumb blogger with unoriginal thoughts,,, interesting.