THE WORLD COMES TO WEST 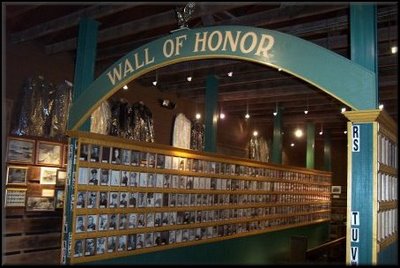 I have the 1994 post almost done..damn it's work..anyhow while I am gathering up pictures and info I thought I would do a West, Texas post..especially since we have had a little excitement around here..Last week some kid made threats to some of his fellow classmates...not the 'I'm gonna kick your ass kind of threats'but the 'I'm getting a gun and gonna blow your ass away' kinda threats..I d

on't think he was serious but he made them on two different occassions and the parents of the kids weren't waiting to find out..so the kid is in kiddy jail..and we are all dealing with the shock of it..
We are having our Miss West contest and have some very pretty ladies entered in the contest..Lindsey Kreder, Veronica Lenart, Jessica Holecek,Heather Holt,Marie Van Pelt and Bobbi Jo Norton..We're having a blood drive,St.Mary's School is having a carnival, Abbott church is planning a revival,Gerald Church is having a Bazaar,and the West Brethren Church is giving flu shots to anyone 14 or older..
We received 1.5 inches of rain and the burn ban has been lifted..we are expecing more and hopefully we will get some.
PFC Colby Bohannan in currently stationed in Iraq, in a small city near Baghdad.Anyone wishing to send a care-package or letter to him may do so at:PFC Colby Bohannan,TF 1-325,Fob Speicher,APO,AE 09393.
Monday is Bosses Day...get your boss a nice surprise..call in sick...We had 3 births.Grace Elizabeth Watson at 6lbs.7 ozs.and 191/2 inches long.Ty David Janek was born weighing in at 9lbs.4 ozs.and 20 1/2 inches long..He is pictured wearing a Dallas Cowboy shirt...holding a little football...sooo cute..Then Madison Frances Lucas was a tiny birth at 5lbs.11 ozs. and 19 inches long..Helen and Davey are celebrating their 39th anniversary..and we lost 2 of our citizens.Lillie Yahraus,84 andWesley Smith,70.The Knights of Columbus are having a turkey dinner on Oct.29th at the Knights of Columbus Hall,and there is going to be a Holloween Dance at the KC Hall, where you can have your kids picture taken with the Great Pumpkin.The West Hardware Store is celebrating its 60 year anniversary and bird seed is on sale..so will go get some this Sat.and a free hot dog...soda is free too..but well..no soda...The West Food Mart is owned by the same old fart and they are celebrating their 55 year anniversary..
The Lady Trojans split two volleyball matches..The West Trojans will begin the second half of their football season playing the Venus Bulldogs. We are 4-1..lost our homecoming by 2 fucking points..Holy shit..Food Mart has Blue Bell on sale...AND Dr.Pepper....fuckity fuck fuck fuck...by the way after 3 weeks..my glucose went from 330 to 181...so I am getting better...
There are some prime property for sale...one is right on I-35 with approx.2.42 acres with 5,000 sq.ft,metal building, office area, plus a 3-bedroom,2-bath brick home for $285,000.
A new listing of a 3 bed-room,2 bath on.50acre, with wbfp,etched concrete flooring, privacy fence, 2-car garage with guest room and half bath.$141,000.A lady name Mary Green died and they brought her horse and her dog to the Cemetery for the services...I love West, Texas.
Jamie and her mom and step dad moved to Bellmead, so now I am here alllllll alone...no family.....just me and Her Royal Highness,Ruler of Everything, Queen Anne...and if she doesn't learn how to poop in her liter box without tipping it over..it will just be me...Jenny came by the other day and brought me a picture of N. who I haven't seen in 5 years..she is so beautiful..will post it when I can..Jenny was in her dental scrubs(lime green) and looked so grown up..sigh*...
Other than the fact that our cold front has moved in and it is now in the 70's..and we are expecting more rain..ain't shit happening her in West, by Goddess, Texas...
oh oh oh oh oh! I just remembered...I received a package..I'm looking at this package and thinking 'who the fuck do I know in New Jersey?..When I opened it out pops a sweat shirt with ROADKILL(you kill it...we grill it!!!)Artemas, Pa.and a little orange kitty cat with smashed in middle with tire tracks on it..I had forgot I had won the sweat shirt by sending in my email address first ....so thanks for the great sweat shirt..and as soon as it gets cold enough..I will wear it..Annie has already latched onto the dead cat..she sleeps with it...
ya'll come back and see us now ya'hea?

Do ya reckon they heard about yer diabetic diet so they felt safe in putting the blue belle and dr p on sale.

Heh. that's pretty cool about the horse and dog attending her funeral although I do hope neither one threw themselves on her coffin. Oh well at least the dog knows where to go to dig her up again I guess. arrhaaha. oops.

Oh look at that smug BamaBugg up there...*sigh*...alwaaays second best I am. HA!

Does first still count if you don't comment on the post?
Try using duct tape to hold the litter box down. Duct tape, the only thing a guy needs to fix the world.
It seems like the churches are all having their fundraising events at the same time so that people can't afford to attend them all.
Rainy here today but our cold front isn't here yet. Friday night it is supposed to be below freezing. Damn Canadian air.

I'm jealous - a road kill shirt, too funny!
West sounds like a busy little place....yesterday a home made bottle "bomb" was found in a local high school. They evacuated and it was removed, I don't think they know who did it though. Sad. I swear this sort of thing NEVER happened when I was in school.

Your post reminds me of the town my grandmother lived in down in Georgia when I was a little girl. They would announce it in the paper when Mrs. Such and Such had company for dinner.
Awww life in a small town

junebugg:oh, jb such a great card you sent to me ..for girlfriends day...thanks
apos:never...second best...how lucky i am to have so many first's...i loved the fact that the horse and dog were invited..they said she rode everyday and the dog always went with her and it was only fitting that they went with her at the end..
nitwit:..hmmmm, duct tape..never thought of doing that..will try it..
west has a fund raiser of some sort every weekend..and these people will freeze anything..will hit all the fund raisers..get food at each one and either freeze it or take it to a relative..we raise more money for a little poor town.makes me proud.
it's supposed to get to 80 today..but i dont see it happening..it's probably in the 60's now and its 10:30am..i love it..but it's gray..i like cool and blue skies..
carina: i love this sweat shirt..is so cool...i havent been able to use my blog roll to get over there and let them know i got it..and love it..annie sleeps with the little runded over kitty cat..
autumn:yeah, all little towns are special..but i think mine is the best..

I'm glad Queen Anne is setting the rules around there and keeping you in your place.

dam sounds too busy there for me. I have a road kill tee shirt and I love it

good news on the glucose!

i've learned from h allen smith that it's a sin to put bell peppers in chili.

who knew? i'm a fecking sinner.

I never got in trouble for making threats in school. I did get suspended a number of times for fighting. Idle threats are made gy wimps.

Oh, I have to tag people now and guess what. You're it! It's the 5 random facts about yourself game. Now you have an annoying task.

I hope you get that rain. Tell the Goddess Mimi said it is cool to send our extra rain to you.

Blue Bell and Dr Pepper on sale?
FUCKITY FUCK FUCK FUCK is damn right! Are they COMPLETELY off limits? You gotta live a little!

BABS:im telling you ..for a stray she is mighty picky..
ol'lady: i wore my road kill sweatshirt today when i worked at the library and it was enjoyed by all.
rubyroks:im working on the glucose..slowly but surely..and i could have told you that there is no bell peppers in chili..ever..not even allowed to have them in the same room...fecking sinner...you do use the lean spaniard dontcha?
cletus:im the one that tagged the one that tagged you..find someone else suckkaa i already gave at the office.
mimi:not until i get my sugar down..no good stuff at all..they told me thought to keep orange juice around in case my blood sugar dropped..i decided to use an 8 1/2 oz bottle of Dublin Dr.Pepper instead..with a sign on it that says open only in case of an emergency...hhah

Used to be that if someone said I'm gonna get my gun.....chances were that it was just a lot of hot air, said in anger. Can't take that kind of stuff for granted these days. Hope that kid is using his kiddie jail time to sit and think before he does something like that again.

Great job! It's hard I know because everything has suger in it.

Have you hit a low yet?

My doc upped my med and I've been hitting really low. I was out for a walk and I felt like the ground was going to fall out from under me, like I was going to disappear. Got home and checked, it had dropped to 55. What a God awful feeling.

I am exercising now and that brings it down, so I may need a another med change on this.

I was working on my family tree and I found some papers that my great uncle had stolen 4 turkeys and the court papers sentenced him to 4 years hard labor for the theft. Whatever happened to those tough laws and punishment?

cyber: i havent heard any more about it..west is covering their poop again..
nancy: so far i havent bottomed out yet..but my energy level is sky high..and im soo feeling back to normal..that's sad about your great uncle though...that's a little harsh for 4 turkeys...

I don't live in west Texas. I've never even been there, but after reading this I wish I did and feel like I have been there. Good for you on the glucose. This must be because of your strength of character. Be sure to post your picture in the roadkill sweatshirt.