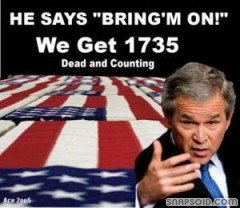 All this in a country desperate to be "liberated"..Go figure.

sling: they just want to live their lives like everyone else..get up, have breakfast with your wife and kids..go to work and come home and watch tv and not get the shit bombed out of them...they want to live without fear..

And Bush wants us to live in fear. Fucker.

Watched the film "Death of a President" last night. Don't know if you lot are getting it over there or not - no one was picking up the distribution in the USA last I heard, but you never know. Anyway, damn good film, see it if you get the chance. I was unashamedly quite enjoying the thought of Bush getting offed while watching the film until this line was uttered: "....and then of course Dick Cheyney was sworn in as President..." O_O Y'know stupid as it sounds, I hadn't even contemplated that before. Bush is scary but Cheyney is waaaaay scarier. And he'd get in by default. Scary scary shit.

YDG, yep there are thousands of these pics yet the TV news never seems to be able to find them...fuck...hopeless...

Beansidhe,
If that did happen, I'd bet that Cheney was behind it.

babs:ya..the bastid will use fear to keep the republicans in office and that it what i fear the most.
beansidhe:hey...how are ya..missed you alot..i think the movie is just coming out here..and even the democrats are screaming about it..saying his family shouldnt have to go thru seeing him get killed even if only in a movie..the movie about bobby kennedy is coming out and they are saying the real thing is enough to make you not want to see a fake one..sooo who knows...but your right cheney is worse than bush..so it one's going to go..they both have to..ha..
allan:yea, i was amazed at how many pictures there were out there..i had 25 but couldnt get all of them to work..damn blogger.

Writing a blog is sometimes a very tough thing to keep fresh. I like the way you have been posting and hope you can keep it going.
Beth
Fitness Club

I do not want to start any controversy and I agree that the photos are not "nice" to look at or think about. BUT...all these men signed up for the military. Where did they think they would be sent when they signed up? See, this is what I don't understand. No one forced them to sign up knowing full well they would be shipped off to war. How do you answer that? Like I said, I am not trying to be nasty it is just something that bothers me.

I hate to see these pictures. But I wish they were given as much publicity as the Hilton whore and all those other worthless people. Then people would not be so clueless and hopefully, finally do something to make a change.

CHEYENNE:most of the boys/girls that signed up where under the impression they were fighting in Iraq because their president said there were weapons of mass destruction there..and if we didn't go there and get rid of Saddam he would use them on us..that was a lie....so they joined under false information...and then to top it off..they joined up for a certain amount of time...some were already in and were not aware they would be sent to war based on lies...then to replay them for their loyalty instead of getting out when they had been promised..they rotated them in and then rotated them right back out..I am sure that was not part of the deal..plus a lot of the soldiers that are there now were retired and out of the service and they were reactivated to go to war based on lies..some of them have been in and out 2-4 different times..the 52 year old woman that was reactivated had been out for over 6 years...plus they are not speaking here...i am..i am speaking for them..that they had their lives taken, their arms, legs shot off, for a war built on lies...i am speaking for them...they would probably say they are fighting for their country and Iraqi freedom..70% of whom what them to leave their country but bush wants to stay the course because he wont admit he is wrong..even when everyone says it is....
mimi:that is why i put the pictures up..so eveyone can see for themselves what this war is doing to our soldiers..

Cheyenne...what granny said. Plus many of these men and women were clueless teenagers when they enlisted and recruiters do a hard sell on the training and benefits, without ever telling you oh yeah you might actually have to go to war...I was in the Navy Reserves, did my six years of weekend warrior and luckily never got called to go anywhere (I would have gone even ikf I didn't agree with it because I signed the papers saying I would) but for the most part I figured we were being a waste of taxpayer money.
The NYT did an excellent magazine article about the 1000s maimed in this war..the war supporters not only don't want us to see images of coffins, they don't want you to read about all the injured.

When we had a real press they were there and telling it like it is. Now they are imbedded with the troops and the stories they tell are controlled by the government. I was in the Air Force for 17 years and saw first hand (though the AF didn't get as gung ho as the other services) the brainwashing that takes place. Plus if you don't keep to the party line you not only get in trouble with your commanders but have to deal with the hazing and such you get from the other troops. They have taken peer pressure to new heights.
I thought the rant was over. I think I was mistaken.
The Gump is just following his Daddies example with Quail. Find someone so bad to be Vice President that nobody would dare take you out.

carina:thanks..that helped..and if i see one more photo up with bush and a wounded soldier..i may go redneck and kick his ass...
nancy: yes..sad and a waste.
nitwit: i love your rants as they are always right on the money...those poor kids are afraid to go against the tide.eveybody is following the company line...and we know if bush goes you have to make the next 7-8 people have to go to...or it's a wash...fuckityfuck

and they have over 600,000 lost, their previous government wiped out, their army wiped out, a new government in place, a new army beginning...I guess we lost

It's a mess over there. We went over there under false pretext's and it looks like there is no end in sight.

the soldiers were part of a new "economic draft". wipe out the middle class, outsource jobs and one of the few options those without skills have is to enlist.

the pictures might also apply to lebanon soon where thousands of unexploded cluster bombs line the street waiting for some kid to come and play with them.

Ain't it the shits that all our young and old are getting killed or disabled from this senseless war. My daughter is Army and almost all of her unit have been there and some are still there. It pisses me off too. I never liked Bush and I guess I never will!

I wish Bush could be a soldier over there for a few years.

Around 655,000 Iraqis have been killed... that number will probably be pushing a million by the time Bush leaves office.

otilius:we had lost before we had ever fired a shot..
mike:yup lied our way in and the little weasel fucker is still lying..
ruby rocks: yeah i wondered about israel's pulling out and leaving all those unexploded cluster bombs hehind..
ma: im so sorry your daughter is over there...I will add her and you to my prayer list..
bluebeer:hell he didnt even serve when he was in the service..bastid.
josh:..yeah, they lie about how many have been killed too..fuckers..

I think they ought to take an arm and a leg off Bush and reassure him it's "for the cause of freedom." I have four good friends in the military, two of which have been or are going to Iraq. Dave, a Marine, is scheduled to go back for a second tour of duty over there. My buddy Robert is a sailor on a nuclear sub that's going to be stationed in the Persian Gulf. When they enlisted, just out of high school, I know FOR A FACT the recruiters told Robert he would not be going to the Middle East, and I'm pretty sure Dave never planned on spending two years over there either. If either of them ever got killed or injured in this quicksand-hole of a war, I would be one mad little hillbilly. I support the troops but I don't support who is telling them what to do and what they have to go through because of it.

normy: i hope that they come back safe and sound..i will light candles for them...and say a prayer...

This is the part that gets ignored by the mainstream press.

I second the motion from cyberoutlaw, America needs to see pics of the real war and how it affects people and families.
In Nam they were allowed to show coffins,and all manner of gore, but early on you noticed all that was silenced and the media was not able to show them coming on in boxes.
I could see into it if the family would abject to something like this, but this is when you have the government telling us what we should and should not see, it makes me laugh when I here the neocons talking about smaller government.

cyber and floyd: yup..they dont want visuals...and from what i have read..the parents and families of the dead want those pictures shown...and i noticed on local new where they would almost ignore the local deaths of soldiers in iraq...now they video the funerals and run articles in the paper..they didnt use to..so think they are starting to see the light...maybe...
yea one of my biggest arguments with a republican was when he said democrats wanted more government in our lives..i went ape shit..said no we wanted less government in our lives..out of our wombs, our of our hospital rooms and out of our bedrooms...bit the head off a bat and went home..haha