Yes folks, my new heroine...is a 14-year old girl with freckles and braces.She is into liberal politics and popular movie stars.One of these subjects got her questioned by two secret service agents and taught her a lesson about living under the Bush Regime.That was the results of 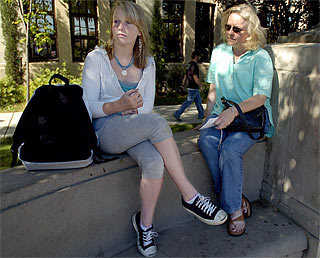 her posting unAmerican type images on her MySpace web page.Under the words "Kill Bush," Julia had posted a cartoon like photo-collage of a knife stabbing the hand of President George(aka Forest Gump) Bush. This was one of some other images she had used to decorate an anti-Bush Web page.She moderated this page on the social networking Web site MySpace.
Federal law prohibits making true threats against the president, and Julia and her parents say what she did was wrong, but her parents are upset that fe

deral agents questioned a child at school with out her parents being present.Plus First Amendment lawyers question whether the Secret Service might have overreacted just a tad to a 14-year old's comments of a Web site that is for casual socializing.
This is what went down...Two Secret Service agents arrived at the Wilson home on Wednesday and told Mrs.Kirstie Wilson that they wished to speak to her daughter about threats she had made to the President on her MySpace site.At the time Julia was in molecular biology(bet Bush couldn't pronounce molecular)and didn't want to take her out of class and she would make sure that Julia came right home from school so they could talk to her.She asked them to come back in an hour and they left.Then Mrs. Wilson text messaged her telling her to come straight home from school as 'there were two men from the Secret Service that want to talk to you.

Apparently you made some death threats against President Bush. Don't worry you're not going to jail or anything like that buat they take these things very seriously these days.'
"Are you serious!?!/ omg. Am I in a lot of trouble" Julia replied. Then Mrs. Wilson called her husband. While they were talking, she received another text message from her daughter:"They took me out of class." Julia said later it was a 15-20 minute interview.Agents asked her about her fathers job and her Social Security number.They also asked her about her MySpace page she had created last year as an 8th-grader.
"I told them I just really don't agree with Bush's politics," Julia s

aid."I don't have any plans of harming Bush in any way.I'm very peaceful, I just don't like Bush."
Most of the groups belongs to are fan clubs for movie stars like Jake Gyllenhaal and Ewan McGregor.The group that got her into trouble was called something like "People who want to stab Bush"..Julia said she doesn't remember the exact name because she changed it soon after.
After an eight-grade history lesson in which she learned that threatening the president is against the law, Julia said she changed the group name to "So Bush is an idiot but hey what else is new."
The group is composed of other teenagers who share her political views.She deleted the group page over the summer when she decided that MYSpace was juvenile and taking up to much time..Her parents said they had no idea what their daughter had posted online.
Representives of ACLU of Northern California said that Julia'

s post didn't sound like a 'true threat' to the President, making it a political speech protected by the First Amendment.A member of the First Amendement Coalition said that in the current political climate 'the threashold that brings agents in has gotten lower.'...no shit sherlock.
Well...well ...well..so they can't find Ossama Ben Buttfuck but they can track a 14-year old down in Sacramento,Calif.and scare the crap out of her for her MYSpace post..which isn't even up any more...she deleted it over the summer..and they are just now finding her?..fuckme...
Regardless....it's a sad shape of our country when the smartest person around is a teenage girl...like she said.."so Bush is an idiot, hey...what else is new?".....

Dang it! I was just looking for this story so that I could do a post about it. Oh well, you saved me the trouble, I guess it's true what they say
"Great minds think alike!"

ahh yes, bluebeer...it's almost like we knew each other in another life...or maybe we are neighbors...like maybe you live in the state right next to mine...
do a post about it anyhow..you do good work..she will be the most popular 14 year old in the country..although i think the repukes have her on a watch list..they will be slandering her in another 4 years..

crap im no anonymous..what the fuck

Since MySpace is owned by the same chaps who own Fox News, I wouldn't be surprised if her posts were sent directly to corporate headquarters (that's the White House) as soon as she entered them.

How ridiculous. She'll probably be marked as a known terrorist now.

cyberoutlaw: i didnt know fox owned myspace...now that is fucking scary..
good thing she's a girl..or foley would be im ing her...
jan: dont you know the irs is going over her parents files for the past 25 years.what did they her ss number for?

This 14-year-old terrorist agent was a threat to everything America holds sacred. It's good that the Secret Service arrested her. She needs to be rendered to Syria for some hardcore interrogation.

And Boy George can TOO pronounce molecular. It's "Mol-Ek-ler."

Hear Hear, Tom! We can't let up in our never-ending quest to turn out these domestic "turrists." Dissent with the policies of the man who has Jesus whispering in his monkey ear cannot be anything but kinship with Osama, Hugo, Fidel, and Kim Jong Il!

thom: forest gump is trying to get her moved to texas so he can put her on death row...
jollyroger:yup them turist are bringing down our country...buncha hetherns...

Hmmm so are you awaiting a visit also JS?

How about Bush and the secret service take notice of his own daughters and the crap they do? This girl is smarter then both his kids ever hope to be, but you have to feel sorry for them, look who raised them.

Laura Bush, said on National TV that fat people all had mental health issues otherwise they would not be fat, including the fat children. What kinda person say's something like that? She needs her head examined.

Poison Bushes Suck! You know like poison Ivy and Oak!

More proof that Washington DC should be quarantined as a Hazardous Waste site. . .

That young lady has more brains than the entire Gump family combined. . .

apos: im telling you i would not be surprised to hear a knock and go to the door and find feds there....wont be the first time..and probably not the last..them and the texas rangers have not fared to well with me..
nancy: them girls belong in uniforms on the front line..pampered little bitches..
i still remember what barbara bush said about the victims of katrina..that they were all poor and had such crapy lives that they probably did good by being in the flood..they made out..someone needs to bitch slap all them bush women.
jublue: ist amendment was the first thing that went with this administration...
lauren:nana nana boo boo...i am still in second place..hahahahah...cant believe it..dont know shit about it but im in 2nd place..

there seems to be a different set of rules for the elite and the rest of us.

cheney can shoot someone with a shotgun and the victim apologizes but some teenager gets busted for joking around.

Obviously terrorists have Myspace pages. Finding Osama should be easy; just look for people who have him in their Top 8.

rubyrocks:ruby is right...she is alllllways right..
ol'lady: yup alive and well..
Josh: why is it they can track a damn cow from it's birth place to where it gets killed, butchered, sold and ate..but cant find a 7 foot tall man in a turban hooked up to a kidney machine..?
babs:bring out the roaches..sic 'em

Remember the pictures they showed after the domestic spying came out of NSA headquarters? Way down under that place is the hardened bunker that holds all the Cray supercomputers some of witch have bots that view every web page they can get to and look for key words. Just think how many pages (web pages) are being investigated to cause them to take so long to get to a direct threat to the President's life.
Boy I'm behind on my comments, I got a new computer! Now I'm still trying to get all my programs and settings on it.
They probibly looked into your past JS and the Secret Service couldn't find anyone with enough guts to knock on your door.

well the secret service has never knocked on my door(knock on wood) but the feds have...twice..and the texas rangers 3 times...the texas ranger was so angry at me that he actually sputtered...he kept trying to scare me by showing me his big ole texas 84 shot pistol...finally i said do you know who freud is? he said yes, i said..well he said...the bigger the gun....the smaller the dick...or words to that effect...the sherrif of the town and his deputy were there also and they burst out laughing and the ranger was so pissed he sputtered...turned red, grabbed his hat and stomped off...never to be seen again...ahh yes..the good ole days..

I hope she grows up to be President.

allan: from your mouth to the goddess's ears
nitwit;yeah and she's to smart to be president...i love the little dick theory of law enforecement..