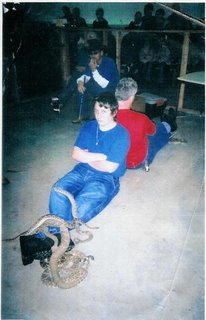 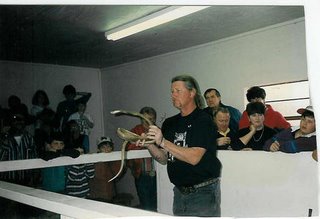 Ok!...so just to prove to you that most Texans are crazy..here is my friend Mike. A. in the pit with a cobra..he handles it and shows it to everyone...and then he puts it on a table and makes it hood up and then he kisses it on top of the head...yes he really does this..and does it all during the snake round up season when he along with the rest of The Heart Of Texas Snake Handlers go around Texas putting on snake shows..People in the town will go sack up snakes and bring them in. They get rated for the largest, longest, most and then they weigh them to see you had the most in weight.. After that is taken care of..they kill all the snakes, skin them and fry them up...and yes they do taste like chicken..chicken that has been eaten and shit out.....Part of the snake show is teaching people what to do and what not to do if you come upon a rattler...wake up and find one in your sleeping bag...stumble on one out in the country...things like that..Then they have a sack contest.where stupid people..er...anyone can get in the pit and sack up as many snakes as they can in the least amount of time..this is usually when people get bit...they also lay in a sleeping bag and then they pile snakes on top of you and then zip up the sleeping bag and then your skootch out of it..slowly...then they have some stupid people...er..anyone that wants to walk barefoot in the pit full of rattlers..or they do like Mike and his (at the time)14 year old son lay back to back and they drape snakes on you and you sit there like an asshole while the snakes crawl all over you..he has been bit once that I know of...yup...that's my buddy Mike..we are both Scorpio's....but trust me...I ain't getting in a pit full of rattlesnakes...I've been married 3 times..that's enough stupid things for me..

A rattlesanke in my sleeping bag?? I don't mind snakes, but the thought of a rattler in my bag makes my skin crawl and scares the bejesus out of me!

Poor snakes, having to spend all that time in the pit with stupid and crazy people. No wonder they bite. :)

Snakes give me the creeps. I don't like them and I don't go where I know that they may lurk.

Eeeks!snakes freak me out..but I think I'd take snakes any day over three bad marriages.

Yikes - I like snakes but don't know about walking barefoot in a pit of snakes. I might do it just to be macho, LOL. I'm like that.
And yep, I'd take the snakes over three bad marriages too.

OMG snakes. Jackiesue that might be the perfect husband! Cause one day he won't come home and you collect the insurance. Ha.

One nice thing about western Washington, is there aren't any poisenous snakes for the most part. Now eastern Washington, in the more arid areas, have rattlers, I'm told. That's another thing I don't miss about Texas, the abundance of snakes that can kill you forthwith.

maybe they should get all the snakes and drop them in lebanon. this might make the jews and arabs declare a truce and go after the snakes. or the dumb fuckers might take it as a sign from god and run for the hills.

Holy crap! I'm not afraid of snakes per se, but that is either insane or one of the ballsiest things I've ever heard of.

I think I'll just stick to trouser snakes, thank you very much.

Nice to see your friends are dumbasses, I'll probably post on them after they get out of hospital :)

I personnally don't mind the taste of snake. It beats the hell out of jackrabbit chili.

Snakes are slithering reptiles that can be sliced and diced, I will ginsu their asses to Happy Texas and back again....I am going to see you soon, Goddess.

Doesn't sound like much fun. Snakes don't bother me but I don't go out of my way to rattle them.

Don't they get sued when people are bitten by the snakes? GOD, I hate those things!