WE EAT ALL WE CAN AND WE SELL THE REST 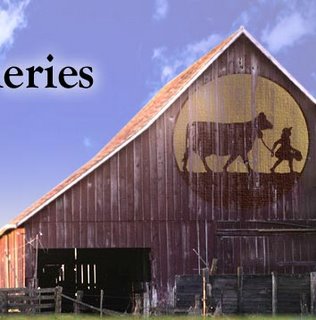 NOTHING SPECIAL HERE...JUST THE ICE CREAM....EAT YOUR HEART'S OUT...

whoa what is this - im drooling! :P

Now I have to go find a special site to get my workout in and lose all the weight I gained reading this post.
I'm gonna strain my eye musels if I work out too much.
Don't see too many of those low rider pants around here any more, but your right about the girls. At least that's what I hear as I never look. :)

oh you are evil!

hold on a minute I have frozen yoghurt in mah freezer...

My eye muscles are what I meaned. Duh. :P

Damn that ice cream looks good ! However, I better pass- diabetes you see.

Ah hell...now you've got me wanting ice cream at 8 in the morning.

What happened to Moose Tracks? I have always wondered how they keep the peanut butter cups so soft in the ice cream.

What a cruel woman you are! My wife makes the best homemade Peach ice cream and guess what?

I CAN'T EAT THAT EITHER!!

Why don't you write about Fried Chicken, mashed potatos...you know..

OTHER STUFF I CAN'T EAT!!

Thanks I needed that sugar high to catch up on all your posts that I have missed. Loved the told you he was a dick...besides being the our new Sec of the Interior:) he really thinks he's Sec of the Exterior...he's way too shallow fir any interior work. Missed ya!

They need to get off their butts and start selling it in Washington, darn it! Don't they know there's no good icecream up here?

Although, if I don't find a job soon, me and the husband may just end up back in Texas living in my sister's spare bedroom in Beaumont.

Blue Bunny is the best!

When my job was putting in alarms, we had to work on one at a Bluebell plant. They really do eat all they can! They have freezers for the workers full of every kind of ice cream and ice cream bars all that stuff, luckily for us it was July when we were there. And the bosses wondered why that job took longer than expected, dah!

heavenly hash, nut-n-butter, the list is endless. we need to devote more research money to coming up with more and better ice cream.

also, we need freezers that have a special ice cream compartments. one of my freezers makes it too hard and one makes it too soft.

what's a poor boy to do?

I'll take some Strawberry Shortcake, and some Carmel Turtle Fudge, and....

Being a clone, I require no ice cream.

WTF was that? Sounds yummy!

Tin Roof is vanilla icecream with chocolate covered peanuts and, I think, chocolate syrup swirled through? Someone correct me if I'm wrong.

My favorite Blue Bell favorites were Caramel Turtle Fudge, Pecan Pralines and Cream, and Banana Pudding. There's nothing like it up here in Washington. We did, however, find a flavor called Double Vanilla by Dreyers that is similar to Homemade Vanilla, but not quite as rich. My husband doesn't believe that there's a better vanilla icecream than that. Next time I get him down to Texas I'll have to prove I'm right.