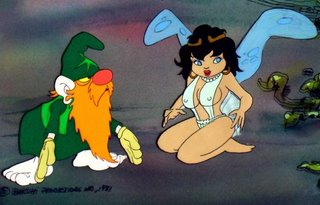 This is one of Jackie's YAFTA'S...as in you have to rent or buy this movie...My kids and I saw it when it first came out about the s

ame time as Star Wars....which we saw also..We really did like Star Wars..but we were plumb gaga about Wizards...(fuck interception by San Francisco, our first of the year..damnit)..It was made in 1977..and it is a sci/fi fantasy animated movie about a war between magic and technology...it's after the world has been destroyed by nuclear bombs..and only fairy's and magic folk are left along with mutant monsters...the war is be

tween twin brothers..the fairy Avatar and the evil monster brother who represents technology..One of the voices is done by Mark Hamill...They ran out of money before they got to the war scenes and when the director Bakshi asked for more from Fox they said nope..George Lucas asked for more m

oney for Star Wars and they said nope..Wonder what else we would have seen if them tight ass bastids had coughed up the dough..????
The battle scenes are original shots of real Nazi films..it's really creepy but if they could have acquired more money it would have been different and a lot better..People either love this film or hate

it..I love it..I wish that he could remake it with all the money that he needed...
You can buy this on most places for as low as $9.00..It is worth the money...check it out....This is the movie that has Larry in in..the creature that is the pet of the evil Wizard...'Larry like Master...Larry love master....Master feed Larry?'(COWBOYS WIN....)

Sounds like something Little Pissy would love. I'm gonna tell her about it!

Wow, that sounds very offbeat and cool! I'm not much of a movie watcher, but I've made a note of that one. Doesn't sound like something Blockbuster would carry though....

I didn't remember that one until you mentioned the Nazi war footage. I never understood why he used it instead of the animation. Now I know. I can't believe that their playing feetball in this heat. The players are going to be worn out befor the playoffs.

This is the first of I've heard of this one. Sounds intriguing! I wonder if ebay might have a copy? I'm always on the look out for interesting films for the kiddo as we do not watch very much TV.

Oooh, I'm gonna have to look for that one. Sounds like something I'd love to watch.

I'm gonna go find this. I love off beat movies! Thanks for the heads up!

I LOVED this movie! I remember going to the midnight showings as a teen ( uhhh on acid) and watching this week after week.....

I'd never heard of this movie, and I'm usually up on fantasy-type animated films. I'll have to check it out.

I remember watching "The Black Cauldron" as a kid and enjoying it... it's sort of like the black sheep of the Disney family, but it's cool.

My brother was a big Star Wars fan as a kid, and I remember he once mentioned something about what George Lucas could have done if he had more money. Actually, "big" Star Wars fan is an understatement. I think he still has his light saber.