No this is not a joke..really they are going to 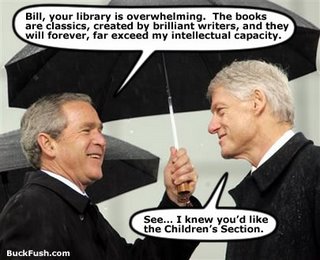 build a George W. Bush Presidential Library. For 300 million dollars...no, really....they are...and this is the kicker...cities and universaries are fighting over the honor to have said library built there. This is no joke, so stop lauging...'cause it's not funny...Ok, it's a little funny....ok, ok, it's A LOT funny..
My mind is boggled...what are they going to put in his library? Books on how to be a Yali cheerleader? We know he READ one book....the one about the goat, that he read to the kids while he sat there in "shock and awe" as his aide whispered into his ear that the towers had been attacked by terrorist....A book on avoiding the last 6 months or so of your military service. Lets see, 'Cocaine, how to use it and not get caught"..Oh, and business books....at least two "How to fail in two or more business's"...and "Lessons Learned from My Failed Business's"(a very, very small book)..and mabye a book that tells you how to go from a failed business owner to owning a very small percentage of a baseball club, parlay that with help from Daddy's bidness friends into being governor to the ultimate scam....President Of The United States...I'm sure it will be full of books telling us how to give all them bidness cronies of his Daddy's very important jobs, whether they are qualified for them or not..who care's I'M PRESIDENT. Just think:"Six years ago he couldn't spell president ...now he are one.."
Oh, well....if Forest Gump had any self respect or pride he would tell them...no thanks...no Library...I'm not worthy of a Library....yeah, right...like that will ever happen..
As you may or may not know...Baylor University in Waco is in the run for the Library....so that is a good thing...no really...because if they do get the Library? HUHUHUH....I will be able to drive less than 20 miles and walk around with a sign that says "Thank you Goddess ......he's president no more," on one side and on the other side"fuckyou, you forest gump acting asshole." or words to that effect....Although I have a feeling after all the posts I have written about my feelings for ole Forest Gump....the powers that be are under direct orders to "shoot that bitch on sight"..

That library will be filled with the sounds of crickets chirping.


LMAO over your remark about the one book he ever read, about the goat. Thanks!

Wonder how many homes for the homeless could be built with that money instead?


Yes, you missed a great race!!! Bummer about your antenna with the winds. We're supposed to get rain tonight.

I think it will be a library with 500 copies of Green Eggs and Ham. The only book he's ever read and understood.

As Steve Blow said "what are they going to fill it with, coloring books?" I love that line.

cheney's probably going to build a one room shack and charge 300 million.

You said it all and quiet eloquently I might add.hehehe

Hell, at the rate his office is classifying everything in sight you'll have to have a Top Secret clearance to get in.