GIVING IT UP FOR KINKY 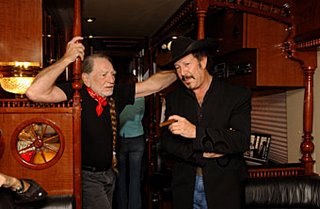 I don't know if it was a fatal flaw in my plan, a power nap gone wrong or I really did want to vote for Kinky. Tuesday I hadn't slept and took what I thought would be a little nippy nap and ending up sleeping till after the voting booth's had closed..So I saved my self for Kinky even when I didn't mean to ..So now I'm giving it up for Kinky. Going to sign the petition and help get signatures for Kinky and see if we can't get him elected.. I can't believe I slept right through the primary. do'h.
I finished the book 'The City of Falling Angels by' John Berendt. What a waste of trees...I am reading 'A Million Little Peices by James Frye....so far it is pretty good...While reading it I was remembering the first and second interview with him on the Oprah Show and I came to the conclusion that ole Oprah really screwed up when she had him on the show.First she has him on and goes fucking gaga over him and his book. Just raves about it...makes it sound like the best book she has ever read.....then she finds out that he embellished the truth in his book, in enough places where she feels'duped'.....With no thougth to what it might do to his sobriety or his mental health, gets him back on her show and rakes him over the coals, embarrassed him speechless and treats him like a mass 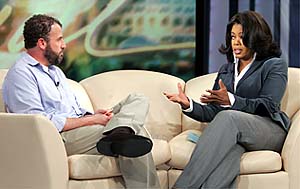 murderer...Judas priest...he's a drug addict, alcololic crack head..of course he lies...that's what they do..they lie....he has told those stories 70-11 times...and every time he tells the stories they change just a little...mainly because he can't remember what really happened, and if you're going to change the story, might as well, make it a bettter story..I understood it completely..but ole Missy Oprah....noooooo, he duped her....like that is the first time someone took advantage or duped her...excuuuuuuuuuuse me...but seems like Tom Cruise's couch jumping episode was a dupe on a gigantic scale..Jumping up and down on that couch pumping his arms in the air telling her and the world "im so in love".....fuck....i would have been more embarrassed by that little show than the fact that some crackhead, drunk pill popper stretched the truth in a book about his drug history...What a hypocrite....she really showed me a side of her that I didn't find flattering.
Think she's been reading her press releases.....it's just Hollywood Oprah, not the cure for cancer...
fuckme till I give you my autograph
Posted by JACKIESUE at 3/09/2006 12:39:00 PM

I think she's taking her popularity a tad too far. I refuse to watch her any more.

I never vote in primary elections I am an indipendent and think that they are a huge waste of money. Kinky's sure to win if you get involved.
I can see you going door to door and saying "Sign the petition for Kinky and help get rid of the fucking asshole we are stuck with now."

I never watch her and Jackiesue I would love to have your autograph.

kinky is da man! i'd vote for him twice if i could.

i wonder what oprah looks like without makeup and a thousand dollar hairstyle.

Hope you didn't kick Rocky. Poor kitty. The only reason I eat is because they make frozen food already prepared. I just have to stick it in the oven. I'm not big on most microwave meals for some reason. But come summer, I will go ovenless because it heats up the damn apartment to 150 degrees. What was I talking about again?

Our sleep schedules suck. I just took my Lexapro so, I should be in a coma in not to long. Coma! Coma! Coma!

I can't get into Blog Mad, can you?

I stopped watching Oprah some time ago because of her head stuck up so badly. I know she worked hard to get where she is and I respect that, but she is losing touch with the real world.

It will be interesting to see if ole Kinko makes it.

I used to like Oprah a lot more in the past than I do now; seems she toots her own horn a little too loudly; I admire people who do good deeds without publicity and fan fare, she's not in that category anymore. I selectively watch her shows now...

I agree with you. I think Oprah went so totally overboard with her outrage. Give me a break! The fucking NEWSPAPERS don't even print the real truth anymore, why on earth should this guys book have been held up as the Bible of all sobriety stories!? But then again, look at the publicity it got her, she was EVERYWHERE for that entire week! So when you really look at and get to the bottom of it, Oprah probably couldn't have cared less if the book was true or false, she just wanted the spotlight on her.