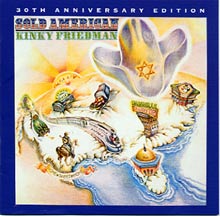 could (with all of your help) come up with a snappy, cute, funny catch phrase or a theme song for Kinky's champaign it might help him and help me while I am out stumping for my friend of Jewish persuasion..because I don't think the titles of his songs will do it...'they don't make Jews like Jesus any more.'...'Get your buscuits in the oven and your buns in the bed.'...and 'Asshole from El Paso'
I did go to his web site and there is alot more information about what he plans on doing and what he wants to do...I am more impressed now than I was before,a lot more impressed..
I still don't think me asking people to 'give it up for Kinky' is going to work with all of the people out there...ha...-
So....put your heads together and see what you can come up with....its kind of like one of Denise's caption contests......but not...Come on ya'll....give it up for Kinky....
Posted by JACKIESUE at 3/16/2006 04:57:00 PM

I don't have any...but tell you what I'll do. I'll go into Blog Mad and surf for you to get you more credits so you can get some more hits and get some people to see this and maybe get some more ideas...
Working on it now for you!

Jackiesue, I just came on briefly to inquire about Mojo and Bailey...? How's he doin? How's she doin? Happy St. Patty's Day from this Irish lass... :)

This is all I got:

Link with Kink for Texas

Who stands for hope and pride?
Who is for border safety statewide?
Who shoots square with folks?
Who says no more jokes?
Kinky, Kinky.

Kinky is all about hope

Ride, shoot straight and tell the truth with Kinky

Don't Mess with Texas, Get Kinky!

In the Dirty Business of Politics, we all need to get Kinky!

Texan's deserve better than good hair and old Bush, we need to get Kinky!

Damn this guys are way ahead of me! Think I'll go to Kinky's website and get some ideas there....