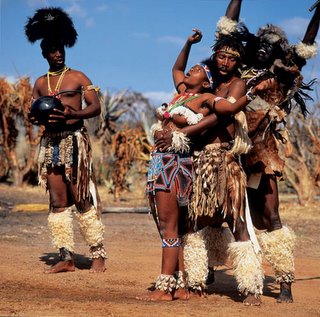 This is just my own small observation....when they first started talking about having the Mardi Gras parade there was talk of not having enough people, floats, etc. I have never been so I am not familar with the parades etc. Anyhow this guy said he had heard that the Zulu's weren't going to have their parade because there weren't enought people...so this 'white guy' goes to South Africa and brings back real Zulu's to do their
Zulu dance and get the ball rolling...Very nice and that is a great thng for some one to do...Personally I want to see his passport and these 'Zulu's' id...cause from watching on tv and seeing their pictures in the newspapers....these Zulu's are the lightest skinned african's I have ever seen...Every time I have seen pictures of African's they have been black. Not brown, or tan or cocoa colored..but black...but these guys running around in furry leg warmers, african feathered lion headdresses are lighter skinned that Harry Belefonte. They are ligher skinned that Halle Berry, Chris Rock, Jamie Foxx, Wesley Snipes and Samuel Jackson. If those guys are Zulu's from South Africa, I am Chinese.

kinky and all his dogs should lead the parade!!

You mean they are actually from South Africa or do you mean the southern part of Africa? S. Africa used to be a British colony so there are a lot of white people there. Maybe they mixed the races? But I don't think light-skinned blacks is all that unusual. Africa's a big place and it may be a regional thing.

I guess it could depend on what part of Africa they are from, I don't know. But like you, anyone I have met that is from Africa (besides white people) have beautiful dark, dark skin and lovely accents to boot. They are also some of the friendliest people I have ever met. The last apartment I lived in, the guy living above me was from Africa and was the nicest guy in the world.

Don't care what colour they are so long as I get a Golden Coconut,lol. They say that is the best "throw" you can get from the floats. OH well it's all over now for another year. The drunks are still finding their way home hahahahaha

Like my daughter Amy said when she was little...Let's go to Mexico and visit the Chinese people. She was 6 years old.

I am with you Jac....those were not Zulu's...
You are chinese and I am a chee-w-wa.
Decide who your driver is yet??

ryc, when i worked in a french restaurant, they would give a 50 lb sack of onions most days to peel and slice for the baked french onion soup.