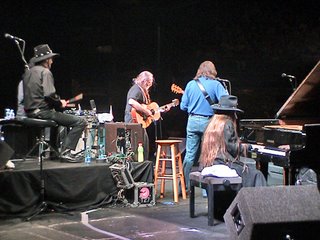 Eveyone knows that I love most things Texas...but I especially love ole Willie Nelson. I also am crazy about his daughter Lana Nelson who attends to The Pedernales Poo Poo. Which is a part of Willie Nelson.com..Pedernales Poo Poo consists of her pictures and musings about the shows, the people, her Dad. Miss Lana is very very talented..I l like to click on and browse through and see the pictures and read what she has to say about the events at the time.. I also stole one of her pictures for background on my computer of her Dad and the Dalai Lama together..It is the best picture I have ever seen that defines 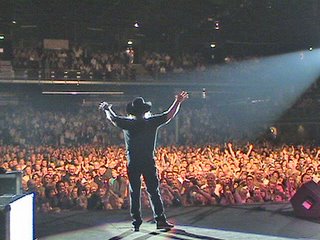 the word 'joy'. So I reccomend everyone taking a few minutes out of their busy day and checking out the many talents of Lana Nelson..and check out (toward the bottom of list ) the 2 pictures of Willie and Dalai.......When you go to Willie Nelson.com you will see Willie's town at the top..you will see a blurb that says Pedernales Poo Poo...click on that..you won't be disappointed...
Posted by JACKIESUE at 3/12/2006 03:29:00 AM

I need to go see these pictures...

Went and had a look-sea at Willie's website, boy does he have it set up nice. I like the part where the little movie thing goes along and you can make the buildings move with your mouse (you can tell I don't get out too damn often,hehehe) also saw the pledge to Kinky,now I understand a little better what you are talking about when you talk about ole Kinky. Don't ever stop writing about West (by Gawd)Texas because you do a heluva good job reporting about all that goes on there. You are keeping up a small-town newspaper all by yourself hehehe...hugz,Linda

Lol! That reminds me of my partner at work. His nick name is Poo Poo. One of our first days working together I noticed people kept yelling "Poo Poo!" When we would drive by. I was begining to think it had to do with our pickup saying "Water&Sewer" on the side!

I have every Williw Nelson record ever made. I went to a couple of his concerts, I just love him and his voice is like butter. Melted butter. He tours with Bob Dylan, bob can't sing no more but willie still has it.

shiit i didn't even know he had germinated any kids. which isn't saying a great deal as i'm not exactly up on ole willy...tho i quite enjoy his warblings when forced to listen.

But what if I am disappointed??? Huh, what then???

Ya, snakes are alright. I know the boys were getting them out to try and freak people out and Aunt Babs was like nope, it's just a fucking snake. They were kinda cool actually, but I don't care to have one as a pet. Plus the cats would tear it to shreds.

Why call it Pedernales Poo Poo instead of chit-chat, like a mentally healthy person---not an overgrown kid with scatalogical obsession, plus an antisocial psychotic, psychopathic anger mgmt problem, given your sick fantasy in Cooments-welcoming line, indicates you may well be---would call it.