RUSSELL THE ONE EYED MUSCLE 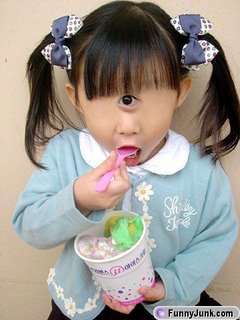 I am having a great telephone day...First my nephew Phillip, then my Dr. called and one of my meds is in...hooray....and then I get the best phone call of all...from my old boss and buddy Thomas Wiggley...or 'wiggley'.....he owned a paint company and I worked for him as paint person, wallpaper person, cashier, driver and delivery person, or just what ever they needed done person..He is the one that taught me how to custom match paints and stains...I was goooooood....Could match drops of paint on caps, plastic, watch straps, etc...had the eye...but I excelled at stain matching and it is a lot harder to do...But I rocked...don't know why,but I have the eye for it...anyhow, I left that job and they adventually went out of business, not because I left, Jones Blair shut the shop down. So we hadn't seen each other in years and years and he called out of the blue..it was great...we laughed called each other sonofabitch...and caught each other up on what is going on...He told me the funniest story about how he had named his "dick" Russell the one-eyed muscle.....I cracked up... and Russell's last name is not Wiggley but Wiggleme...So it is Russell the One-eyed Muscle Wiggleme......Now you see why he and I were such good friends...His wife Christine would listen to us go on about weird shit and just shake her head...He has 2 sons Butch and Ace...what a character..He and Christine are going to sign my Kinky Friedman list....
I went to City Hall and got permission to go door to door....He didn't know who Kinky Friedman was...I had to tell them what my truck looked like and was asked not to go after dark as there were so many old folks that would be afraid of anyone knocking on their door after dark...I have also decided not to ask them to sign for Kinky Friedman either...these old folks will freak out when they hear the word Kinky...so am going to ask them to sign to get Richard Friedman on the ballot....First place I'm going is to the old farts home .....they will sign anything if I give them candy.
Ok, I am off to get people to give it up for Kinky.....
Posted by JACKIESUE at 3/15/2006 12:40:00 PM

I'll sign - I'll "give it up for Kinky".....Hell I'd give it up for a bottle of Aberlour whisky and someone to talk dirty to me *grin*

Good luck JS!! Go get them old folks!! You old Viking you!

I use to work in a lumber yard/hardware store. I use to try to match paint, but it was kind of hit or miss with me. I think avoiding the word kinky is a good stratagey.

I adore your blog! I have already signed for Kinky, I first heard he was running for Gov lsat year and I have been a fan ever since.

I'm in. I'll vote for him, at least he's a musician. And I like the name Kinky, it will make for great campaign slogans. This could make a blog....Thomas sounds like he's full of piss and vinegar, crazy like us.

We'uns be spectin' some gawdammed rain dis weekend. Sposed' to be purt' near like a cow pissing on a flat rock.

Hugs and licks and all that shit, yore bastard son.

I know a couple of guys who named their dicks, do all guys do that? Bruce didn't want me to tell, but his has a name to. I promised I wouldn't tell.

You were being mean to a telemarketer? muwhahahahahaha, ain't it fun?
Yes, I have been chipper today. I need to go night-night though.

If I lived in Texas I would vote for Kinky. I will laugh my butt off if he wins.

and dont you be giving any of the hardarse ones no nose candy to coerce them to sign.

I love Kinky! I wish I lived in TX just to vote for him!

Yeah... avoid the word "Kinky" with old people, but with young people, they might think that's cool as hell... if I was an 18-year-old disinterested and apathetic toward politics, I would sign a petition for someone named "Kinky" just to get 'em on the ballot...

Paint matcher!!! Did you do that for car paint too?? Good paint matchers around here are like hen's teeth... there ain't any. Well, one. But... damn, that's cool!

I don't know I'm 50 and I think that having the nickname Kinky would be a major incentive to vote for him.
There is a scary animal looking at me through my computer monitor. Make him go away. :)

City Hall asked you not to knock after dark!!! How refreshing compared to LA!!! I cannot wait to come visit that place!!!