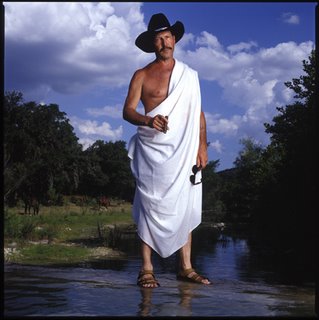 Radio spot features Willie Nelson, touts virtues of biodiesel fuel.
By Wayne Slater(Senior Political Writer for DAM NEWS.
Austin, Texas.Kinky Friedman unveiled a radio spot Wednesday touting incentives for alternative energy, marking the campaigns effort to begin portraying the singer and mystery novelist as a gubernatorial candidate who's serious about the issues.
The 60-second ad features musician Willie Nelson, who calls Mr. Friedman the candidate of "clean energy and clean government." it promotes biodiesel, a fuel made from new and used vegetable oils and animal fats, and marks a departure from the hyperkinetic "Kinkytoon" spot on the campaign Web site.
"With a little imagination, Texas can lead the nation into energy independence," says Mr. Nelson.
Mr. Friedman is seeking a spot as an independent for governor and must collect 45,540 signatures by May 11 to get on the November ballot.
Campaign manager Dean Barkley said promoting alternative energy is the first in a series of campaign initiatives focusing on isssues without abandoning Mr. Friedman's distinctive persona.
In the ad, Mr. Friedman is in lively form, promising that as governor, he would order the use of biodiesel to fuel school buses and the state's fleet of vehicles.
"And anyone who is on renewable fuels of any kind," he said, apparently digressing from the actual campaign initiative, "gets free parking forever in Texas."
Mr. Friedman said that his car does not use biodiesel fuel but that he intends to buy one that does.

The campaign said it had purchased broadcast time on 150 stations statewide for the spot, which encourages Texans to sign the petitions.
The campaign played the radio ad for reporters in the parking lot of an Austin biodiesel supplier.
Carrying a cigar and wearing his black cowboy hat, Mr. Friedman struggled to be heard over the music of a nearby rock band participating in the South by Southwest Music Festival.
He said politicians are responsible for the state's problems.
"I'm not a politician, " he said. "I haven't even been indicted yet."
He said Republican Gov. Rick Perry and Comptroller Carole Keeton Strayhorn "have 59 years of political life between them. These are the people who created the situation. Are you going to bring in somebody like that to fix it?"
He singled out Mr. Perry's proposal for a multibillion-dollar network of toll roads, utility lines and passenger and freight rail lines that eventually could reach many parts of the state.
Mr. Friedman said he opposes toll roads and would name six existing highways for singers Waylon Jennings, Willie Nelson, Buddy Holly,Bob Wills, Stevie Ray Vaughan and Janis Joplin.
M

eanwhile, Mrs. Strayhorn announced that 2002 Democratic gubernatorial nominee Tony Sanchez and former House Speaker Rayford Price, a Republican, have signed her petitions to put her name on the ballot.
"Republicans, Democrats and independent signers are all Texans who care about the future of Texas and know tht Carole Keeton Strayhorn will shake up state government in Austin," she said.
A spokesman for Democratic nominee Chris Bell said the signatures underscore her status as "an insider obsession and an electoral mirage."


Ok...my take on this is........promising me free parking for life(tell me how you can pull that one off, Kinkster.) is not enough to make people elect him..No one wants him to stop being who he is...but we need more serious information from the campaign about very serious problems that Texas has...Biodiesel fuel is a good start..but keep them coming...
and as for Strayhorn the 'one tough grannie'....well, sugar....I got your tought grannie right here....I stayed with the guy who brung me(democrats) untill I wanted something they weren't able to give me...a better state and a better place for children to be raised...I,unlike her, didn't hop from party to party looking for the right fit and one she thought she could sway to meet her needs...She went from Democrat to Republican to Independent.....make up your mind gannie...who da fuck are ya..
So even though I have my doubts..I am still going to give it up for Kinky....
fuckme till I smoke illegal cigars....
Posted by JACKIESUE at 3/16/2006 08:14:00 AM

I've seen a lot of places
I've been around the world
I've been seen pretty faces
Been with some beautiful girls
After all I've witnessed
One thing still amazes me
Just like a miracle, you have to see to believe
Chorus:
(cause) god blessed Texas
With his own hand
Brought down angels from the promised land
Gave 'em a place where they could dance
If you wanna see heaven, brother, here's you chance
I've been sent to spread the message

This is all I know about Texas.

A supermrket chain in England, Morrisons , has started selling bioethanol ( made from wheat). Unfortunately only a handful of cars can run on it ,the Saab 95 and a few Ford Focuses.
Brazil has half its cars running on bioethanol made from sugar cane and has done so for the last 30 years.Shame they had to cut the forests down to make way for sugar plantations.

Hey Jacki sounds like you are getting wound up for the elections this Nov. Ought to be a long hot summer for you,hehehehe. Tell ole Kinkey he has a few more months to come with more goodies than free parking and naming roads after country singers...But if anyone can whip him into shape, you can. Think of some good planks for his platform and get your clipboard and pencil out. You might be out getting people to sign up to Kinky's ticket pretty soon 9And I want to hear all the dirt when you go on those campaign bus rides all around Texas *cackle cackle*

Who gives a fuck about free parking? I park for free at my apartment complex and at all places where I've worked in the past the parking has been free. WTF kinda promise is that?
Plus, people who don't have cars aren't going to give a shit about that either...

Kind of off topic here, but do you remember a British fellow by the name of Screaming Lord Sutch? He was head of the Loony party. He died awhile back and I have missed his presence in the world. Kinky isn't as "loony" as Sutch, but I am so glad that he is just out there doing his thing!! Let's hear it for the Kinkster!!!