Every time I hear someone say well if they would raise the wages on some of those jobs that the Mexicans do. ...the American work force would do the job and we wouldn't have to have undocumented workers do it. I agree that the minimum wages should be raised, no doubt..but it irks me to see white/black workers not take jobs to take care of their family because it doesn't pay enough..easier to take welfare..although in Texas we don't have welfare...We have food stamps and some very weak programs for kids..but no wellfare..But what really pisses me off is the workers in New Orleans...the companys have government contracts to do jobs there(cronies of forest's)and then instead of giving the jobs to locals who want the work, can do the work and to bring their families back there, are not hired..why? because they have giving all the jobs to undocumented workers becaue they work cheaper.
I wish I had some answers.....but I don't.........I do think making them legal after they have been here for 10 years makes better sese then trying to round them up and send them home. Like that will ever happen....West's version of a protest??A drunk Mexican rode down the center of town on a horse yelling "Viva Zapata." 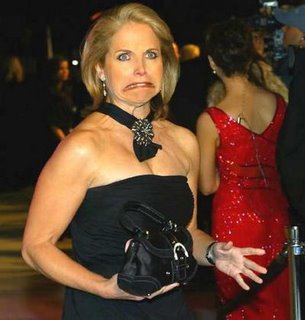 I do have a reply to the Katie Curic coming to late night CBS news....don't....It has nothing to do with her...I just hapend to think that Bob Schieffer is the best news anchor on tv and don't want to see him replaced. Especially by some perky female..I know...I know...should stand by the sister...but I like my news from old guys...I liked Walter, Chet, Dan, Peter, and I have a crush on Bob Schieffer on CBS and like getting my news from him...Plus he is a Texan...and I like geting my news from guys that sound like my Daddy...

We all are indeed immigrants and some of our ancestors were in the same boat as the illegals today.
I am sorry you are losing Bob, and please no IRS audits dear Goddess. Mrs. Shife and I just cut Uncle Sammy a nice, fat check because she owns her own business so I don't need any more surprises.

They are felons and have broken the law. Are you saying that is OK? Yes, they can round them up and drop them off at the border. I volunteer to drive.

Ever been on the ET ride at Universal Studios, seriously it's aces!

It's like the t-shirt picture I posted a few days back that had Native American warriors on it with the caption "Homeland Security, fighting terrorism since 1942."

What the FUCK is wrong with this goddamn blogger today? It's as slow as molasses, half the time I can't get people's blogs to come up, I have to keep signing in over and over everytime I make a comment. Then some peoples blogs I can see but there comment boxes won't come up. Eeeeaaaaaggggghhhh!!! I DON'T WANT TO MOVE AGAIN!!!!

Well said. Lots of people seem to forget that this whole country consists of immigrants.
As for Katie Couric, she is an annoying c*nt.

I don't really watch the news for my news, so no biggie about Katie for me, but I am glad to have more women doing anything!!! CHICKS RULE!!! The immigration issue out here is really hot. Cinco de Mayo may prove very explosive this year. There have been huge walk outs and stuff at schools. There is also a concerted effort to remove the authority of tribal governements on Indian land. No one is happy about the fact that NA don't have to pay taxes. Tough tacos! We stole their land and took away their lifestyles-- etc, How many times did our government break a treaty? Anyhow, sorry to sound off!! Good post!

Hey Jackie look out for La Raza and all of those. According to some Mexicans all the border states belong to them. I might be an immigrant but I came here, assimilated, minded the law and had only one kid (who can afford more these days? I see the struggle Amanda is having just with one). These people come here, won't learn English and like to take over. Now I know some hard-working hispanic people, very family oriantated, I have no problem with anybody but the pushy ones who want to take back the country. It's just one big mess and I see no good coming from it. I don't know if the head ones are gonna do anything about it,or even if they can. Personally I think they should scooped up everyone in the streets. Go to the border. Tell the legal ones stop being trouble-makers and go home. Put the illegal ones over the fence into Mexico and let them go home too. I don't know what is gonna happen.....

No real comment on how the aliens should be allowed to stay or go, other than they should be made to go through the legal channels to stay and not come in and hide. The bad ones give all the others a bad name. Example. Yesterday my daughter and I were at court for a speeding ticket. In walked the next case. It was an illegal immagrant. Barely spoke English, he was supporting his family by selling junk at a flea market, had no real job and was up on his second DWI offense. He was asking for bail. They locked his ass back up until his trail..Sorry but I had no kind thoughts for him..

Granny,
That was me who deleted the comments, next to mine. My computer went hay wire and blogger posted the same thing three times...
Didn't want you to think someone was messing with your blog.

I'm not an immigrant and am getting tired of people using that as an excuse to condone people who are breaking the law.
I had a distant relative who in the early 1600's decided to come to the new world., everyone else in my family is native born right here.
I even had a Great Grandmother who was full blooded Cherokee.
I'm not Irish American, English American African American or Dutch American. I'm just a plain old American, and I'm sick of people who think I should change this country instead of them melting into the pot with the rest of us, and do it through proper channels like my wife did, even though they lost her paperwork twice.