Ohhhhhh, I love Vanity Fair....this is the green issue..with Julia Roberts, George Clooney, Robert F. Kennedy, and Al Gore on the cover...some absolutely great articles on global warming. There is one article that I wish all of you could read.It is titled The Rape of Appalachia. If you read 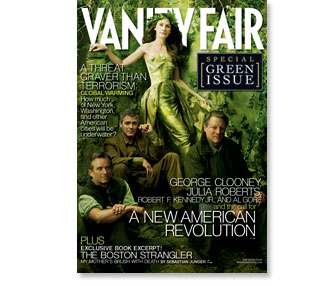 this and are not moved to tears I don't know my readers....it shows the most horrific pictures of the mountains of the Appalachian's that are now huge gaping holes in the ground..the tops are leveled...thanks to the coal mining industry..The E.P.A said that in 2003, 4000,000 acres,all rich and diverse temperate forest has been destroyed between 1985-2001. Which means that number is even greater now..Generations of family's have been uprooted because of the coal mines. I tried to think of the scariest parts to relate to you..but i would have to do the entire article and it is just too long...so I will only tell you about this earthen dam that is build behind the Marsh Fork Elementary, which has 217 students..The pit holds chemical slurry left over from washing the coal.from a helicopter it looks like a huge, open-topped hornet's nest, filled to the brim with black, opaque liguid.It holds 2.8 billion gallons of highly toxic liquid.They can and do rupture..in Oct.of 2000 one of them ruptured and sent 306 million gallons of sludge to the local waterwasys.. worse environmental diaster in the southeastern United States. in 1972 an impoundment breached sending 132 million gallons of sludge and drowning 125 people in the process.If the one behind the school breaks it is all over with, even if they had time to alert anyone..it would be too late..The kids are all sick at the school..They have had as few as 4 or 5 kids in a class, the rest out with diarrhea and vomiting...There is more...much more..but like I said..it is too lengthy..I don't know if you can google Vanity Fair and read the article or if you have to read the magazine. It is worth the $4.50 to get the article...it just made me crazy...fuckers...And who is allowing this to occur? You betcha...forest gump....On Jan. 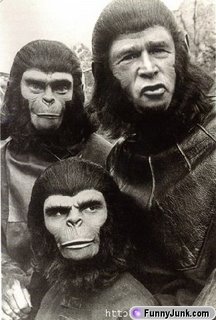 20th, 2001, his very first day in office, Bush called in chief of Staff Andrew Card and told him to send directives to every executive department with authority over environmental issues ordering them to immediately put on hold more than a dozen new regulations left over from the Clinton Administration. These regulations included everything from one that lowered arsenic levels in drinking water to another thatsought to reduce releases of raw sewage. There were rules setting limits on logging, drilling and mining on public lands:increasing energy-efficiency standards;and banning snowmobiles in Yellowstone and Grand Teton National Parks. All were put on hold.
This was no surprise to most Texans. In a 2000 report by the Republicans for Environmental Protection(rep), Texas was the worse state in the nation for emissions of toxic and ozone-causing chemicals, as well as for the discharge of carcinogens harmful to the brains and central nervous systems of small children.Texas had the largest number of hazardous-waste incinerators and released more airborne industrial toxins than any other state. It was number 1 in the production of cancer causing benzene and vinyl chloride, in the release of toxic waste into underground wells,and in violations of clean-water discharge standards.During Bush's 6 years in Austin,Houston passed Los Angeles as the city with the worse air quality in America;by the time he left office, a third of Texas's rivers were so polluted that they were unfit for recreational use.The REP study could not find one single initiative by Bush during his time as governor that sought to improve either the state's air or its water.
While running for reelection, the REP Political Action Committee took the almost unprecedented step, for a G.O.P.group, of refusing to endorse the party's standard bearer. The organization said,"that over the last four years, the Bush administration has compiled a deliberately anti-environmental anti-conservation record that will result in lasting damage to public health and to America's natural heritage."
The president evidently felt otherwise. In his second presidential debate against Sen. John Kerry, he declared,"I'm a good steward of the land. The quality of the air is cleaner since I've been the president.Fewer water complaints since I 've been the president."
The National Resources Defense Council reported in Jan. 2005, "Over the course of the first term, this administration led the most thorough and destructive campaign against America's environmental safeguards in the past 40 years."
For all of you people that read this and continue to say well, it's not my problem, or what can I do?I say to you get off your ass and vote for someone else, someone in anything but the republican party. If you say you don't vote..well....to this I say 'MAY THE GODDESS BRING DOWN A POX ON YOU AND A CURSE ON YOUR FAMILY'..You stupid asssholes..
ok.... I don't know which is redder right now..my face or my ass...Shit like this makes me so crazy. It makes me understand the law saying there is a 7-day waiting period before you can buy a gun.
I was going to write about some other stuff..but this is long enough and I want to do a good job on the post about traveling gypsy cowgirls...
SO.....GO REGISTER TO VOTE...BE INFORMED..VOTE YOUR CONSCIOUS AND IF YOU DON'T WANT TO DO THIS FOR YOURSELF..DO IT FOR THE ONES THAT WILL COME AFTER YOU...DO IT FOR THE FUTURE OF THE WORLD....
Posted by JACKIESUE at 4/21/2006 03:55:00 PM

Damn it i lost my gun in a pawn shop,now all i have is a bb gun.

I did vote against him!!! Twice no for president and against him for governer too. The bastard.

Jackie Sue! This is Josh, I used to post over at "the other site" as "vitriolaholic." They gave me the boot today, so now I'm over here with the "bad people." I tell you, I should have seen it coming. Snacks, rubyrocks, adversecamber, and me, all in the same week. Wonder who will be next?

Drop by my blog and say hello!

I just read an article on global warming in Time and the photo essay was deeply moving. There was a time-lapsed photo of the retreat of an iceberg. It had gotten to the point where the sherpas just marked the mountain at the point where the iceberg started each year. Tsk, tsk...

Holy Astroturf Batman! Between this post and the double whammy on PBS on Tuesday night, geez, we are screwed!!! But hopefully the more of us know about this stuff the more ideas we will come up with. It is not yet too late, just almost too late! I do not even listen to people who complain about Bush and didn't vote. Iknow so many people who don't vote. WTF?

Oh gosh. I am sick to my stomach about the appalatian problem. Here I worry about a Weeping Willow tree when so much more important things are going on. I am going to try to get a copy of Vanity Fair. Thanks for the post.

See, the gump has made Texas number one in lots of things.
I live in the Appalachia area of Ohio. Some of the poorest areas in the U.S. and big bussiness treats the people like just another third world population to be used and abused.
I never voted for anyone named Bush.
Damn, I fell asleep reading your post. I must be tired. I'll have to catch up on other blogs after I sleep off a week at work. :)

It's funny how we like our god to be all truth and light yet we elect a president that is all about lies and deception. He even got a lot of votes being more moral than gays. American voters sure are easy to fool, but I guess that's why he decided to run for president in the first place.

Hey sweet thing ...will read your posts today and those of others I adore on hear..how do you put people in the column of contacts or whatever the heck it is so I can just hit pospest and all? and you? help!! I posted ! I posted! Hooray!! info on my project...emotional post will come Sunday!!Hugs

a wonderful informative post. i didn't know any of that stuff. i tend to be in the dark about such things, not because i don't care, i just don't do any reading. can't concentrate long enough. it took me three tries to get through your post. but it was worth it.