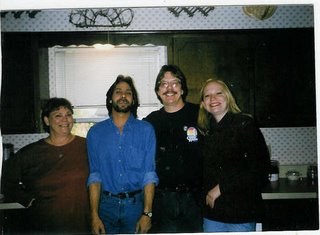 i think i may not have sent these to you..the one of the 3 kids and me and the one of the great dane sleeping on the couch...can you put them on?...such a pain in the ass i am...love jac 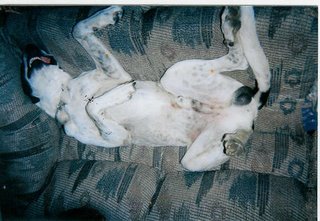 this is my second favorite dog ever...he was the smartest dog, he would go out in the am and go to post office and shake hands with eveyone..then go with Vicky on her rounds, then go visit all the stores in town..come home, go with me to take girls to school... on my birthday the girls took another ride to shcool so I could sleep in...so Baby took off for school and went inside looking for the girls..he finally found David O's daughter Jessica and wouldn't leave ...they finally got him out side and he was chasing kids around the school yard..some of them not to sure he was harmless..so the school called me and said."Jackie, come you come get your dog..he's not letting students in the building" He is now residing in the 3rd home since he came to West...he moves on to better digs each time he moves on...great dog...he also now goes by the name Buster... When I asked Paul, who works for the city,how he was doing..as he was the one who gave him a home, he said,"he liked it better across the street, so he moved over to their house."...they let him sleep on the couch...he loves sleeping indoors..as you can see..

Ahhh... what wonderful kids there!!
And sweet little puppy!!!

That is just so DOG, isn't it? They come into our lives and enrich it with their quirky ways and unconditional love... :)

I want that dog!! For all the fact that I love my Shepherds, I WANT that dog.

That's the funniest dog story I have heard in a great while. Moves in, seeks greener pastures and keeps on going down the line..:D Looks like he's not ashamed to show the family jewels either...
Nice pic of you and your kids, all extremely good looking, and all twice as tall as you, hehehe Thanks for posting these pictures of you, your kids, grandkids and the pets in your life..hugz, Linda

I can tell by the way the dog is laying that he is very insecure,lol! Great pics.

Great lookin' family you have and I can see why you are proud of them all. . .

That dog reminds me so much of CC. . . He lays on the couch and chair like that, like it's the most natural thing in the world. . .

I keep telling him I really don't want to look at where his nuts used to be, but does he listen??. . .

Hey Jacki I just saw ole Kinky on CNN just now (it's near 11pm my time) Of course he couldn't light his cigar. He is going to meet with John McCaine tomorrow to discuss immigration and what should be done. He said among other things that he wanted to close down a slaughter house that was killing wild American Mustangs and shipping the meat to France and something needed to be done. The funniest thing was (and this is where I thought of you) when the news reporter asked him if he played golf. Ole Kinky said:
The only two balls I ever hit was when I stepped on a garden rake" I almost fell off my chair...he's a case. Now that I know about him I will follow him all the way thru election day to see what he does,hehehehe..hugz, Linda

Aw, that's a cool story... and you've been postin some great pics!

Awwww! I miss having a dog. Had one growing up, they are great friends and always make you smile. So unlike a boyfriend..lol.