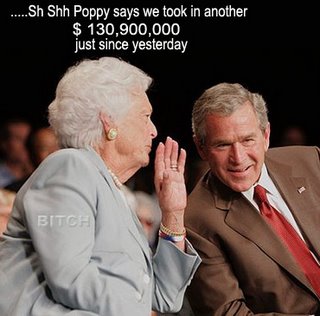 
QUOTES FROM OUR FEARLESS LEADER:
"Those who enter the country illegally violate the law."Nov. 28th '05
"The best place for the facts to be done is by somebody who's spending time investigating it."...July, 18th '05 (On Plame case)
"I think we were welcomed, but it was not a peaceful welcome." Dec. 12,'05 on US forces in Iraq.
"We look forward to hearing your vision, so we can more better do our job." Sept.20,'05 In Gulfport, Miss. 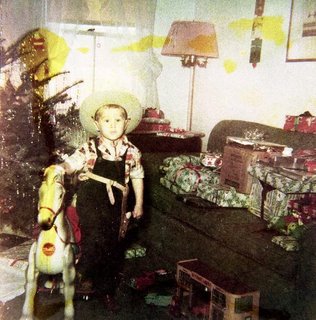 We need to do more to get this bumbling idiot our of control of our coutry along with his blood sucking administration and his money grubbing cronies...
So I call on the Goddess to:..... reverse their fortunes...no smiting, no bipping just reverse their fortunes...can't think of a better punishment....greedy money loving fuckers with no money....yup...works for me...
Posted by yellowdoggranny at 4/19/2006 11:33:00 AM

I'll light a candle and say a prayer on that one! Might even have to call the 4 corners, Bush has got to go!

I second that emotion. I had to read some of those two times. Unbefuckinglievable. Old rich greedy bastards. Middle class is disappearing... way to go - he is such a chode.

i think once these guys leave office they'll really start cashing in on the gravy train with their corporate directorships and stock options.

i tried to get kicked out of the other place for a long time. i think they were desperate for traffic so they put up with me for a while.

Now he says "I'm the decider".

On your comment on my post...
We should be OK as long as NASA stays away from Uranus.

Actually, lately they are doing a pretty good job of hanging themselves while the Dems just sort of stand by smiling and watching and not looking like the instigators. This could all be very good come November.

Hmm I don't vote so I can't really complain one way or the other :) sorry

That man has fewer brains than a rock.

I hope you saw Dave Letterman last night. He had clips of famous quotes from Presidents. Then at the end it showed Bush saying I quit drinking in 86. He looked so stupid.

The man's a moron. But as long as he and all his buddies are making money from oil and munitions, they'll be more than happy to see him stay where he is. Unfortunately.

It'd be funny if it wasn't so damn scary.

Sigh.. and people wonder whats wrong with our education system

The Pirate In The City said...

Hey you old broad! You gonna vote for Kinky? The cowboys still suck! How is the Tuna gonna deal with T.O.?