JACK FROST NIPPING AT OUR ASSES 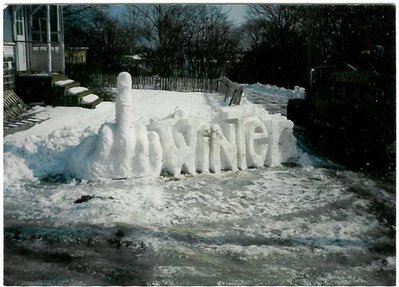 heh someone had some fun in the snow.

are you trying to say something?????

I'd like to say that too, but it's 21 degrees here today, and I think Winter is getting the last laugh on us finally.

Just read on the CNN SI site that while Beckham's deal may be worth $250 million over a five year contract, the Los Angeles team owner only guarantees him (Only???) $48 million, and another $2 million is guaranteed by the league owners. The rest, they're saying is through endorsements and merchandise sales. And you're right, no one is worth $250 million! Geez...imagine what people like Willie Mays, Mickey Mantle, Sandy Koufax could have asked for today?

i'd like to write my name in that snow.

ol lady and apos:wouldn't you love to built that in your front yard?...
cyberoutlaw:it's criminal that he could generate that much money in endorsements..but it's criminal that any of the basketball, football, baseball etc players can get that kind of money hawking some tennie shoes..sucks..yeah, wonder what mantle, aaron or even ruth would have got in todays market?...
ruby:and you would do it in capital lettes and script...

just don't fall on your ass. Or your face or elbows or tits. Don't fall at all.

I'd like to build that in my yard, but it hasn't snowed here since 1967, but it's colder than a witch's tit anyway.

Ah, so when they say "birds head south for the winter," this is what they meant...

heehee and I will get that chance tooo. someday. sooomewaaay.

you'd be safer to fall on yer tits tho...with me it's my arse.

This sums up my feelings perfectly!!!

Too funny!!! And my sentiments exactly!