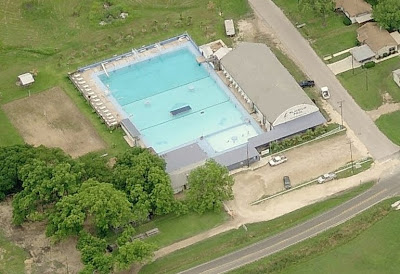 The number one summer destination in West and surrounding towns, including Waco. I remember when they kids used to go it was like $3 to get in..times have sure changed. I want to go ask Jimmy if he'll give senior citizens discounts so maybe the old farts at the retirement apartments will go up there and get some water exercise. I'd go in a flash, but have to be careful about the sun as I blister and my lips swell up like I've had plastic surgery and my eyes swell shut..I think anyone within 100 miles of us, should pack your swimsuit and haul your ass down here for a dip in some nice clear spring water..have yourself a pevo and relax. 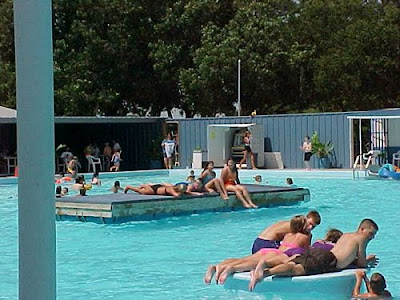 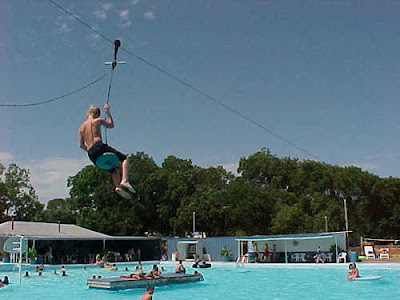 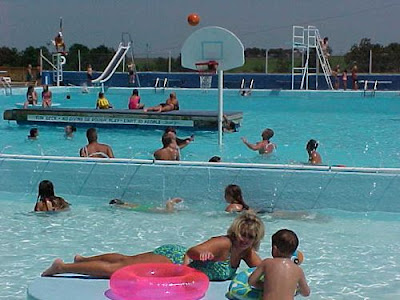 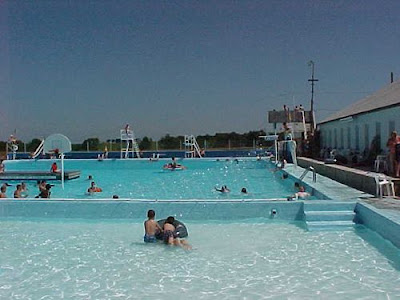 Over half a century of cool, wet, family fun! The West Swimming Pool was built in the 1940's by August and Mary Morris Dulak and their son, Edwin. Named the Playdium, after the famous London Palladium, the Baby pool was opened and constructed in June of 1945. August Dulak's Daughter Francis Poteet as a little girl took admission for a Quarter. The large pool was constructed completed in May of 1946. Its cold spring water was an instant hit with the locals and Military families at Connally Air Force Base near Waco. The large building adjacent to the pool was originally used as a roller-skating rink and later as a dance hall.
The West pool has always been known as a great place to beat the heat of a Central Texas summer. Cold, clear water; nearly 1.2 million gallons is supplied by a nearby artesian well that was dug and enclosed in 1910. Prior to the digging of the well, a natural spring flowed from the site, which reportedly was a watering place for cattle drives on the Old Chisholm Trail in the late 1800s. There was a park near the spring where picnics were held.
Edwin Dulak was killed in a military plane crash in 1947. Over the years, August Dulak added some unique features to the pool, including, two concrete "islands", a tilting and spinning "top", and the "trolley," a rope swing riding on a cable strung across the pool. August died in 1970. Mary Dulak and her children and grandchildren continued to manage the Playdium until 1988. It was operated under lease through 1992. Jimbo Kolacek, who continues to operate the pool today and has added sand volleyball courts, horseshoe pits, and other amenities, purchased the pool and well in 1993. After more than 50 years as a destination for family fun, the West Swimming Pool has become a summertime tradition that is passed on from generation to generation. ---Tim Lyons

plus we must NOT forget the mushroom cap parade...snort*

Wow, that's a huge pool facility! Looks like a lot of fun!

That's a fancy place! I've not seen a community pool with amenities like that. I love the cool spring water. I grew up in Florida where many of the rivers and some lakes were fed by natural springs. Cold! But feels so good in the hot summertime.

Most Louisville pools were closed two years ago because of budget constraints. They did open up several spray parks but that's not swimming!

this is a privately owned pool..so it's paid for by fees, drinks, food, etc..although if it was owned by the city of west I'd be happier..jimbo's an asshole..a racist asshole..but the pool is fantastic.

Cools me off just looking at it. I know what you mean about the sun though. It's not my friend anymore.

If I lived there, I'd be in the pool all summer long. I can't stand the heat! LOL!

Damm..That looks refeshing!
We finally hit the 90's here in O-Town this week.
It's gonna be a long Summer.

I'll have to look here tomorrow. I hope I remember. Because I have a question, Gran. If that's a spring-fed pool, is it chlorinated? There's a public pool in Berkeley Springs that gets its water from the warm spring, but then they add chlorine to it, cuz they gotta by law. I hope West has different laws.

as far as i know there is no senior citizen rate..but im going to ask and yes, they do have to add chlorine..but I never smell it so it might be a miminum amount..
I want to go ask him for not only rates but a early morning before they open up for seniors..

Just came by to say hello. That pool looks wonderful. We have one at our apt complex, but not like that. Of course we have the beach here too, but I perfer a pool.
Enjoy the swim! I will be back by.