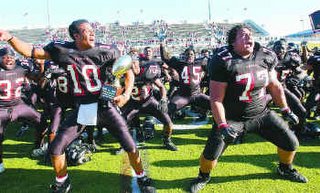 I love texas..article in the paper and on the tv news..In Euless Texas the town seems to have a lot of tonga's... from an island in the middle of the pacific someplace. They all seem to go out for the football team.. they all play..and before each game they do their tonga chant and dance..they stomp their feet, wack their chests, make grunting noises and make the ugliest faces...it is called a haka chant..The haka is a traditional dance of New Zealand's maori peole that is traced to the early 19th century.They perform the haka when coming together or before going to war...The Trinity football team has performed the haka before and after each game this season as a means of team unity.The team consists of lots of tonga cousins...the haka chant goes like this:
ka mate! ka mate!
ka ora! ka ora!
ka mate!ka mate!
ka ora! ka ora!
tenei te tangata
puhuruhuru
nana nei i tiki mai,
whakawhiti te ra!
a, hupane! a , kaupane!
a, hupane! a, kaupane!
whiti te ra!

sounds like a good football chant to me...hope their team won..have to watch the news today and see what happened..
i think we al should learn the chant and do it and the dance evey day...to start the day off with a bang...
Posted by JACKIESUE at 12/10/2005 11:11:00 AM

i am now the proud owner of an official nfl dallas cowboys stadium jacket. a friend was going to throw it out and offered it to me. it's in great shape and it fits.

if that isn't nice, what is?

I love the Haka. I love watching the All Black rugby team do it when they come over here from New Zealand to play against our English rugby teams. I try to do it with them, but always fail :D

man..i wish i had an official nfl dallas cowboys stadium jacket..that is soooo cool..but why the fuck would he throw it away? we won sunday...barely..i swear they are going to find me dead some monday morning with my right foot stuck in the tv set..

I saw something on the news about that when I was watching the news because of the "ice storms".

Yes, the Cowboys actually won. I was chanting, "miss, miss, miss" to the kicker of the other team at the end. I can't believe it worked!!!