AT LEAST WE'RE NOT IN RUSSIA 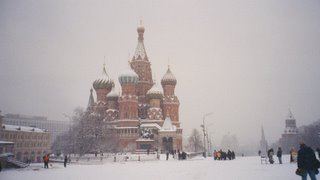 Where it is 24 degrees below zero and they are having their worse winter in over 100 years..I think I can handle 70 degree days and 38 degree nights, because I sure as hell couldn't handle 24 below zero.
I just finished reading a great great book.Title is:Summer Time, and written by Liz Rigbey.Absolutly ass kicker.I am such a dective that I always figure out who did it and way early in the book, but this time I didn't figure it out till almost the end of the book..which is fun for me as I love being surprised.I think this is something you would enjoy babs, if you want I can send it to you..but this one I would like back so I can give it to the library.
I am going to go to the a Texas website and see exactly what sort of fucked up state we really are so I can ask Kinky some hot questions..because I have been reading his web site and except for some smart ass answers to questions he hasen't said what he would do about anything..other than he is for gay marriages, raises for teachers,and prayer in shcool he hasen't said anything..Saying that he belives in gay marriages because he thinks they should be as miserable as the rest of us is not good enough(especially since he isn't married and isn't miserable).Plus I really do want to know how he can be a friend of Forest Gump's and be for anything I would give a shit about.It will take more than being buds with Willie Nelson to sway me.I called Jenny to see if she wants to go, but she has to work a double that day.She is all upset about her Hooter's 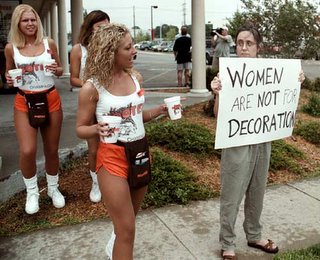 job. She told them when she applied for the job that she was going to school from 8-5 and could only work on weekends and they said that was fine.Yesterday when they gave out the schedules they had her down for all days..so when she tried to explain this to the asst. manager he said this is the schedule and if you can't work it then too bad..So she left..Hurt her feelings, naturally.She is upset but part of her isn't as she still resented being told she had been hired not on experience but on her body and beauty.She was really pissed off about that.Told me that she was raised to be appreaciated for her brain not her bust size..that's my gal...
Will post more later, have to go be jr. reporter...
fuck me till I change into my cape in a phone booth
Posted by yellowdoggranny at 1/20/2006 01:42:00 PM

That's really bad business, but I'm not really surprised. I worked in similar places, and they would pull the same kind of shit. I'm glad she knows her value as an intelligent woman.

He is for gay marriage and prayer in schools? I would like to hear more about this. (Not that I don't think someone can uphold those beliefs, but they do seem contradictory in today's world, you know what I mean? And is he really Dumb-ya's friend, or maybe he is just saying that. Has a Bush backed that up??)

I just got your comment as I was about to comment here! I forgot it was Sooner's birthday, but he emailed me and told me he was going out, so I wished him a Happy fucking birthday and apologized for forgetting. I'm terrible about keeping dates.
Ahh...the cool winds are here. Looks like we will have a night of winter. Which is nice since it is January after all!
Poor people in Russia. That's way to fucking cold. I felt -30 degree windchill one time in Minnesota running from the parking lot to the airport terminal. That was enough to last me a lifetime.
Oh ya, sure send the book on. I'll get around to it eventually. :)

I'm with the rest of you...I hope they are all rich in Russia and can afford the heating bill..imagine trying to get around to work, shopping etc if your car won't crank...I am one of those miserable people who are only happy when temps are 70-75 degrees with low humidity for the day, and nothing below freezing at night. Don't ask for much, do I? So I see you made Sam's list of Filtered Ones at his college.Me too. And a few others we know...oh well,hugz, Linda

o was it the assistant manager that hired her in the first place jackie? if so, well he deserves a kick in the cods for his stupidity. but sounds like it was meant to be huh.

yep sure hate to be born a ruski.

I dont know how this person can like bush but be gay marriages. I've heard of some dutch politician who was a gay conservative, so it is not a copletely surreal thing im seeing here. Reminds me of that old joke that was in the simpsons when there was some people looking for something that was gay and republican, and a balloon shaped as a pink elephant flies into the room.