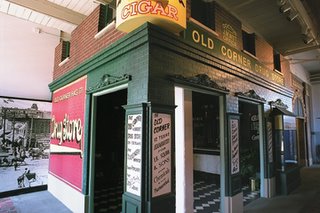 One of the great things about living in a small town like West is my local pharmacist at one of the two drug stores in town.My drug store is OLD CORNER DRUG STORE on the corner of Oak and Main Street.Today they earned my respect and love.
I had been so upset about the dire withdraw symptoms that Maryjo and Babs are experiencing from getting off effexor that I decided to go see the experts.I have weaned myself off all the drugs I had been on for the past 10 years, so Im not a regular customer like I was so I felt a little guilty asking the pharmacist to help me find the information I was looking for, but I should have known better. I explained that my daughter was going through horrible withdraw from being taken off effexor.He printed out some information and then he took the thing that comes attached to your bottle of effexor(you know how tiny the print is on that damn thing) and read the entire instructions to find what I needed to know.Circled the two places where it told what to expect and how to wean yourself off of the drug..All and all, it took almost 30 minutes and he never acted put out or that I was asking the impossible.This wasn't kurt the owner of the drug store but his new partner who has a cute little Santa beard, more gray that white and has this spiffy little handle bar mustache.
(earlier when I typed this out I also typed out the entire 2 sections that he had circled for me...right after I typed it up and was going to change the color to yellow...the fucking electricity went out and I lost the entire post..fuckity fuck fuck fuck..so if they electricity goes out again...well, fuck you guys..go to your drug store and have him do it for you...yeah, right..I bet your local walgreens won't do that for you...ok, here goes afuckinggain)

Patients should be monitored for these symptoms when discontinuing treatment.A gradual reduction in the dose rather than abrupt cessation is recommended whenever possible. If intolerable symptoms occur following a decrease in the dose or upon discontinuation of treatment, then resuming the previously prescribed dose may be considered.Subsequently, the physician may continue decreasing the dose but at a more gradual rate. In clinical trials with Effexor XR, tapering was achieved by reducing the daily dose by 75mg at 1 week intervals.Individualization of tapering may be necessary.
Abrupt discontinuation or dose reduction of the drug at various doses has been found to be associated with the appearannce of new symptoms,the frequency of which increased with increased dose level and with longer duration of treatment. Reported symptoms include agitation, anorexia, anxiety, confusion, coordination impaired,diarrhea, dizziness, dry mouth, dysphoric mood, fasciculation, fatigue, headaches, hypomania, insomnia, nausea, nervousness,nightmares,sensory disturbances(including shock-like electrical sensations), somnolence, sweating, tremor,vertigo, and vomiting.There have been spontaneous reports of adverse advents occuring upon discontinuation of effexor, particularyly when abrupt, including the following: dysphoric mood, irratability, agitation,confusion, headache,lethargy, emotional lability, hypomania, tinnitus, and seizures.
Ok, Im blind now...
One of the main things my pharmacist said was that Drs. should not abruptly cease effexor unless they switch the patient to a drug in the same family, which Maryjo's Dr. did not do...she had her stop taking effexor and switched her to a completely different type of drug in a different family...and should have had her decrease her dosage not stop completely...
I hope that this information helps all of you that are coming off of effexor..may the goddess bless and keep you safe from effexor..
fuckme till I have emotional lability...

Yes, I was shocked that she said her pdoc took her off the Effexor cold turkey. Hopefully she called that pdoc to work out a tapering off schedule. I kinda told her what mine was suppossed to be and then what I ended up doing. Effexor is evil.

I can't believe he just stopped her. JEESH. She had to be sicker than shit. Poor thing. My daughter had a terrible time getting off it. I agree with /bab's Effexor is evil. My theory is they made it so it would be hard to get off of so that some bi polar's would stay on their meds. An evil trick into treatment. But that's just my humble theory...I tell you if he won't taper her I would be getting another Doc.