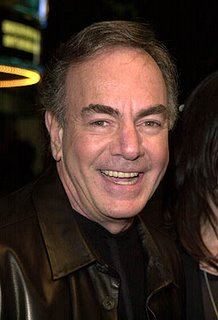 Just in case no one has noticed I feel it is my duty to tell you, that Neil Diamond has big fat ugly ears...realy...check 'em out..go to some Neil Diamond web site and check out his ears..gross...icky..and disgusting .. I have always loved his music...but don't think I will ever be able to listen to Cherry Cherry without thinking of them big ass hairy ears..Another disturbing piece of news.If Elvis had lived..he would be 71 fucking years old..That makes me feel older than the fact that I have teen aged granddaughters and my baby is 32 years old...fuck me till I wear support hose.
remember the Baptis pastor who got busted for propositioning a cop? well, the dear boy has resigned from his duties..citing personal reasons....and remember when I said his name was familar to me...??Well, I talked with some friends and think(not sure but pretty sure) that I used to know him from Waco..he was a house painter and had been known to have the cutest bunch of helpers of any painting crew...and then he sorta disappeared and .......moved to Oklahoma..he was a minor pastor in one of the Baptist churches in Waco...soo it is a possiblility...I always liked him...he was nice to me and didnt stare at my tits all the time..so I didn't care who he had sex with....small world..
fuck me till I paint
one of my favorite head lines in dallas am news.....
49% IN POLL FAVOR DEMOCRATIC CONTROL OF CONGRESS
In an ominous election-year sign for Republicans, Americans are leaning sharply toward wanting Democrats to take control of Congress, an AP-ipsos poll finds.Democrats are favored 49 % to 36%.President Bush's job approval remains low--40 % ...

now for my little statement on this article...now if we had some Democrats with some balls to take advantange of this..we would be in the good..but all we have are a bunch of weak sister wussies, afraid to make a stand on anything for fear of pissing someone off..they are more concerned with losing votes than they are in winning them...dipshits..and as for all those assholes who are running to give back the donation money they got from Abramoff, I would be more impressed if they took back the vote that the money bought...fuckers..
and will close with this bit of news from Penn Jielette of Penn and Teller....who says...
"Believing there is no God gives me more room for belief in family, people, love, truth, beauty, sex, jell-o and al the other things I can prove and that makes life the best I will ever have...
may the goddess bless you....jackie
Posted by JACKIESUE at 1/07/2006 01:42:00 PM

Hope the democrats get in because anything is better than the republicans.

I never really liked his music. But I know a whole lot of people did.
You should vote Libertarian every once in a while. You know just for fun,to make the dems and reps nervous.

thanks for those big fat hairy ears, i used to listen to his stuff.. now if i pick up his cds, i will think of his monkey ears.

Hahaha. I never noticed his ears, but now I will everytime I see him perform.

Right about the Dems. I know one tha has great potential and that is Obama. I hear he is in Iraq right now doing some kind of fact finding and peace finding mission. Wouldn't it be great if he were the one to stop the war.

got my new voter registration card in the mail a couple of weeks ago... ready to vote straight dem ticket..tired of them fucking repbulican bastards.