NOW THAT FOOTBALL IS OVER FOR ME...

Football is pretty much over for me...The Cowboys are out and I don't give a shit about any of the other teams to really care...so I have thought up some new rules to make other sports interesting... 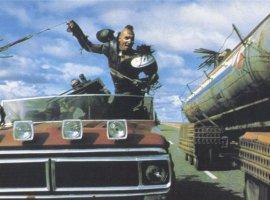 first...Nascar....now i know there are a lot of Nascar lovers out there and more power to you...but lets be realistic here...it is a car race with 20 or so cars racing around in circles...500 fucking times....around and around and around....493 laps to go.wheeee...Now if you want to make this really interesting each driver is given a hand gun with 6 bullets..for each driver and car he takes out he is accredited 15 laps...if he takes out 6 drivers he is upgraded to a larger gun with more bullets..this continues until there is only one driver left with the biggest gun...but your car has to finish the race...now this I would watch...cute drivers my ass...who's the best shot....
Baseball.....now when I was a kid baseball was exciting...especially the games between the Yankees and the Brooklyn Dodgers...when the Dodgers moved to Las Angles, well, baseball held no meaning for me...but if and I say if....you allow the catcher to have a gun and he is allowed to shoot at the runner when he is trying to steal a base, well, hell..I would watch that game..
Hockey....now this is a no brainer...hockey should be played in the nude...Trust me...there will be no more lock outs because there will be thousands of people lined up to buy tickets for the games....women for obvious reasons...and men just to see how they match

up to the "hockey greats"....hell...even gay men will watch hockey now..
Basketball...no more players over 5' 9" tall...it is no fucking game to watch players stand up and drop the ball into the net...we need more short players...really make it a game...either that or raise the net up 4 feet...lets make it harder for them giants..Plus the uniforms have got to go....they should play in speedo's...no shirts and baggy pants..fuck who wants to watch them play in shorts that come to their ankles....???? not me...but put shaq in a speedo and I will buy court side tickets for every game....
soccer...Im sorry there is absolutely nothing anyone could do to make soccer interesting enough to make most americans watch...it's a silly game for foreign kids to play..enogh said.

Tennis...well there is a lot you could do to make womens tennis more interesting...more tennis players that look like playboy models...skin tight low cut one peice teddy's..and spike heels...the games will be long and it won't matter how skilled you are at the game. but the attendance will shoot right thru the roof....men's tennis...im thinking speedo's here too...or cut off bluejeans and they all have to look like brad pitt, johnny depp, etc...you see where im going here?
so these are my suggestions to make sports just a little bit better, more interesting and a whole lot more fun to watch.....may the goddess bless you....jackie
Posted by yellowdoggranny at 1/02/2006 03:55:00 PM

thanks for the "pee recipe". i'll pick those things up at the grocer's after the snow storm. 14", my ass.

Now I'm glad I made fun of your names. :P
Actually, that wasn't my orignal intention, it's just the name that popped into my head.
And it's not 500 laps, it's 500 kilometers per NASCAR Cup race. So, depending upon the track, each race varies in amount of laps.
Also, it's 43 cars, not 20 cars that start the race. Not all 43 survive the race. There's wrecks (sometimes other drivers take out other drivers with their car instead of bullets) and engine blow-ups and flat tires.
We'll teach you yet Jackiesue....

He he Jackie, I knew Babs would chime in somewhere here, but it all sounded funny to me because I don't know diddly about any kind of sport...ps what is this "Pee Recipe" that Lisa is talking about????

hell, i dont know..unless when it was my recipe for hoping john..which is black eyed pee's, rice, ham,onions, and 1/2 bottle of hot sauce.

In NASCAR you should also rig the cars so the brakes only work now and then.
George Carlin sugested that baseball would be better and go faster if when the pitcher hits a batter he's out, and make the outfield a mine field. :)

LMAO I always thought if hockey had cheerleaders on skates more people would watch it. In the name of all that is holy I don't want to see naked hockey though! And remember cold = shriveled. But some nice nudie hockey player calenders would be nice!!! Let me fire one off to the NHL about that! (PS -- there are more female hockey fans than you can imagine-- and we like the sport, not because the players are cute or showing off their legs or bodies or whatever.)

nascar would be good if they raced in a figure 8. or if each race started with 5 iraqi drivers at the front of the pack.