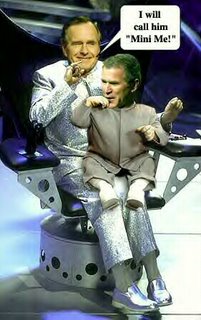 NO MATTER WHAT HAPPENS...DENY....DENY....DENY.......LIE AGAIN...DENY....AND NO MATTER WHAT...STICK TO THE STORY...
Fuckers are beginning to chap my ass big time..Despite 2 studies that warn the war recruiting shortfalls put the forces at a breaking point, and one that was ordered by Rumsfeld's office..he rejected the reports...
In an "interim asessment" of the Iraq war commissioned by the Office of the Secretary Defense, former Army officer Andrew Krepinevich said the strain of keeping large numbers of troops in Iraq and Afghanistan has reduced the Army to a "thin green line." Recruiting shortfalls the Army suffered last year and potential problems in getting soldiers with families to re-enlist because of repeat rotations to Iraq put the Army"in a race against time" to bring troops home"or risk'breaking'the force," Mr. Krepinevich wrote.
Mr. Rumsfeld said he hadn't read the 136-page report but "it's clear that those comments do not reflect the current situation.They are either out-of-date or just misdirected." Another report released by congressional Democrats accused the Bush administration of failing to plan the Iraq war properly, send enough forces to pacify the country and adequately equipt troops.
(among the authors of the report are former Defense Secretary William Perry and former Secretary of State Madeleine Albright.)
Mr. Rumsfeld rejected their conclusions, saing the Army had met its goals for recruiting in each of the last seven months even though goals were raised as part of a plan to boost the force by 30,000.
In reality...the Army fell6,667 troops short of its fiscal 2005 recruiting goal of 80,000, and the Army Reserve missed its goal by 4,626.
so here's the deal..Mr. Krepinevich was paid by the government to do this report because as Mr. Rumsfeld says,"Well, because the way you get the best knowledge and the best perspective is to listen to people with different views."(he was paid $137,000 over a year for this report)
So what does he do? Says their wrong....just because we hired them, paid them a huge amount of money, and they are supposed to be on our side.....their wrong ..wrong..(deny...deny....deny...stick to it..)fuckity fuck fuck fuck...
Please Goddess it is such a small thing...can't you smite them...??? sort of like a version of the Goddess Bip...? please..

Scary, isn't it? Every day they terrify me further with their denials, stupidity, and sheer greed.

I gotta know what this 'bip' is! I hope it's like a divine interventional beating with a 2 x 4...

This makes me feel a little ill, actually...

Congrats on the caption contest!!! I loved the Paris reference. . .

Ship the smarmy little fuck to Iraq and use his illiterate ass for target practice!!!

Another thing thair doing is stop loss and involuntary extensions of active duty troops. They Keep saying that the troops believe in the mission. If so why are the only contacts with the press take place under controled conditions. GW keeps giving speaches in frount of the troops. What people don't seem to understand is that they can actually be disaplined for asking the wrong questions.
Another sign is the tight control maintained over Blogs by Active duty people.

They also raised the age that someone can join up. Soon they will raise it high enough so I could reenlist if I was that crazy.
Lies, misdirection, atacks on anyone who disagrees with them. It makes the Nixon years look like a lovefest.
Got me going again, sorry.