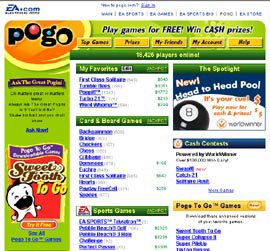 I had forgotten how much fun playing games in pogo was. That is where I met alot of the people I still email.I met Mary who is like one of my kids or maybe a sister, and introduced her to my cousin who lives in Butler, Pa. they have met 2-3 times ...he flys in from butler to Denver and they go dancing and go to the casinos...I met dizzyb, grumpybear, erica, and goudafather.I know their real names now...been over 3 years..Pogo used to be all free games, now they just have an assorted group of games that are free.then I couldn't afford internet service and just kept up with people at the library.So decided tonight to check out the game room and have been playing sweet tooth and popit...Now I remember the other reason I quit playing was I would start playing and would play for hours..It's almost 4:30am and have been playing since 2am..My back is killing me..But i get caught up in the game and bam, Im gone..
I think I might be coming down with something, something sickly ...feel like hammered shit..stomache is flipping around, feel headachey and just general malaise.Think I will go eat a bowl of blue bell blueberry cheese cake...it is really good, got it, homemade vanilla, and caramel turtle fudge, which is kick ass..and to those who try and besmearch bluebell and say that Texan's stretch the truth....always remember..we not only stretch the truth..we are also packing...Blue Bell is the best, and if it wasen't the best in nc...it was because your taste buds are all screwed up from eating bbq sauce with vinegar in it...ha...so take that...They probably made it in nc and didnt use contented Texas cows...
well, I am going to try and catch some sleep..my hours are all fucked up again..Damn..I hate that...
fuckme till I mooooooo
Posted by yellowdoggranny at 1/25/2006 04:14:00 AM

I used to have a membership to POGO I know what you mean about playing too long. I was so busy playing the games that I didn't have much time for the chat with others. I'm to slow a typest and sometimes the games were demanding. Liked Popit but I played almost all the games from time to time. Got lots of Badges.:)

LMAO! I've got news for you darling, I wouldn't TOUCH Carolina BBQ if my life depended on it! You hit the nail on the head, it's all vinegar. Ick! And you need to go back and reread my bluebell post, I said it "wasn't bad" or something like that. But I've had better and I'll stick to that! You Texans, always ready to settle things with guns! Well you don't wanna mess with me sister! Mines big and brite yellow!

Hey, whatever happend to Dan (bookemdanno)?

POGO, is that like freeware? If so, i know what you mean, they're quite a lot of fun.

I start playing some of my computer games, and the next thing I know, it's one in the morning! Sorry you're not feeling so hot. Hope the ice cream did the trick.

Some of them damn games are addicting. Hmmmmm....think I'll have some Blue Bell Rocky Road here in a bit. Yum.

I really want to try this ice cream!!!

Yep- same here with POGO- I lose all track of time :) I am wtchblue there- holler at me sometime :)